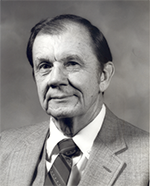 James Seay Brown, (1920-2013) served Tennessee Tech for more than 38 years as an educator and administrator. Brown joined the Tech faculty in 1941 and served as chairperson of the mechanical engineering department from 1950 to 1961. In 1961 he became dean of the College of Engineering, a position he held until 1979. As dean, Brown led the College of Engineering in receiving initial accreditation for the undergraduate programs and he also initiated the engineering graduate programs at both the master's and doctorate levels. He was selected as the Outstanding Professional Engineer for Middle Tennessee in 1972 and as Tennessee Tech Engineer of Distinction in 1981.

These two academic legends, who served Tennessee Tech University for decades, are recognized with this lecture series named in their honor.

For more information about the lecture or support of the endowment, please contact Amanda Fabrizio-Grzesik, Director of Development, at afabrizio@tntech.edu or 931-881-4629.