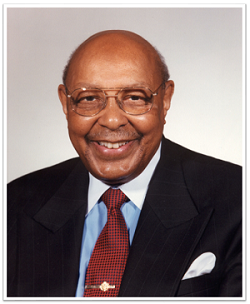 Louis Stokes (February 23, 1925 to August 18, 2015) was an attorney and politician from Cleveland, Ohio. He served 15 terms in the United States House of Representatives – representing the east side of Cleveland – and was the first black congressman elected in the state of Ohio. He was one of the Cold War-era chairmen of the House Intelligence Committee, headed the Congressional Black Caucus, and was the first black on the House Appropriations Committee.

Former U.S. Rep. Louis Stokes played a pivotal role in the quest for civil rights, equality, and social and economic justice throughout his tenure in the Unites States Congress.

Stokes was educated in the Cleveland Public Schools, graduating from Central High School. Following three years of service in the United States Army, he returned to Cleveland and attended Western Reserve University. He earned his Doctor of Laws degree from Cleveland Marshal Law School in 1953.

Prior to serving in Congress, he practiced law for 14 years and was one of the founders of the Stokes, Character, Terry, Perry, Whitehead, Young and Davidson law firm. As a practicing lawyer, he participated in three cases in the United States Supreme Court and argued the landmark “stop and frisk” case of Terry v. Ohio. On November 6, 1968, he was elected to the United States Congress and became the first African American member of Congress from the State of Ohio. He served 15 consecutive terms in the U.S. House of Representatives, ranking eleventh overall in House seniority.

During his tenure in Congress, he shared several important committees, including most notably, the House Select Committee on Assassinations, the Ethics Committee, the House Intelligence Committee, the Appropriations Subcommittee on Veterans Affairs, HUD and independent agencies. He was the dean of the Ohio Congressional Delegation, a founding member of the Congressional Black Caucus, and he served on the House Select Committee to Investigate Covert Arms Transactions with Iran. His work in the area of health led to his appointment as a member of the Pepper Commission on Comprehensive Health Care, and he was the founder and chairman of the Congressional Black Caucus Health Braintrust.

When Stokes retired, he became the first African American in the history of the U.S. Congress to retire having completed 30 years in office. Following his service in Congress, he became senior counsel at Squire, Sanders, and Dempsey LLP, a global law firm, and Distinguished Visiting Professor at the Jack, Joseph and Morton Mandel School of Applied Social Sciences. He has served as vice chairman of the PEW Environmental Health Commission at the Johns Hopkins School of Public Health and was appointed by former Health and Human Services Secretary, Donna E. Shalala, as chairman of the Advisory Committee on Minority Health.

Through the years, he has received numerous awards and honors that recognize his national leadership and strong commitment to public service. A number of landmarks around the city of Cleveland now bear his name, including The Louis Stokes Cleveland Veterans Administration Hospital, The Louis Stokes Annex of the Cleveland Public Library and The Louis Stokes Health Sciences Center at Case Western Reserve University. Several national institutions, including Howard University in Washington, D.C., and the National Institutes of Health, have recognized Stokes by naming certain buildings on their campuses after him. He is the recipient of 26 honorary doctorate degrees from colleges and universities and on July 8, 2003 was honored by Congress with The Congressional Distinguished Service Award.

Stokes and his wife Jay are the parents of Shelley, Angela, Louis and Lori. They also are grandparents to Brett, Eric and Grant Hammond; Kelley and Kimberly Stokes; and Alexandra and Nicolette Thompson.