(Cookeville, Tenn.) Twenty-two fifth through twelfth grade science teachers were immersed in 84 hours of face-to-face training on research-based strategies for critical reading and technical writing in summer and fall workshops thanks to a grant funded by the Tennessee Higher Education Commission. Led by Kristen Pennycuff-Trent, associate professor in Curriculum and Instruction, the project is titled “What’s So Critical about Common Core and Next Generation Science Standards? Exploring Close Reading and Technical Writing in Science.”

Through the workshops, educators used exploration, experimentation and analysis to connect the key literacy skills of Common Core State Standards and the content demands of Next Generation Science Standards with research-based pedagogical classroom practices of the Tennessee Educator Acceleration Model (TEAM). It all fit together to provide teachers better ways to relate Common Core Standards with the Next Generation Science Standards.

“The help of Dr. Leslie Suters, associate professor in Curriculum and Instruction, and Dr. Melissa Comer, professor in that department, and Dr. Gary Pennycuff, a chemistry professor at Pellissippi, was invaluable in this project,” Pennycuff-Trent said. “Our work helped teachers become agents of change by creating a Professional Learning Community within their schools.

“The learning communities consist of at least one literacy educator and one science teacher as well as contribute to ongoing project-based communities that are focused on integrating the CCSS, NGSS and TEAM.”

Common Core State Standards were developed to provide clear, consistent guidelines for what every student should be able to do in math and English language arts from kindergarten through grade 12 in order to be ready for college and careers. Focusing on higher order thinking and problem solving, the Common Core Standards also provide guidelines for literacy in science, social studies, and technical subjects. Next Generation Science Standards were also designed to prepare college and career-ready students based on science and engineering practices, cross-cutting concepts and disciplinary core ideas.

“In essence,” Pennycuff-Trent said, “the NGSS represent the content knowledge of science, and the CCSS are how students express what they know through reading, writing, speaking and listening in the language of science.

“Almost immediately after our project was funded, we received word that the state of Tennessee decided not to adopt NGSS, which is designed to align with CCSS, and instead chose to write their own standards for science.

“While we did introduce the participants to NGSS and the correlations between CCSS, teachers were reminded that they would need to focus on the new Tennessee science standards, which are to be implemented in the 2016-2017 school year.”

Teachers praised the program’s ability to help them better integrate the fundamentals involved in teaching science with the skills needed to effectively write about it.

“I felt like I finally had all the tools and strategies to help me teach reading and writing in my science classroom,” one teacher commented.

Another summed up the training like this, “I was ‘adrift at sea’ before the workshop, and now I am much more prepared and understand the hows and whys.”

“Tennessee teachers are dedicated, hard-working, and committed to the success of their students,” Pennycuff-Trent says, “but too often, middle and high school teachers are segregated into what subject they teach rather than how they teach students.

“Professional development opportunities that encourage exploration, collaboration, and transfer of strategies to the classroom are essential for all educators.”

Overall, participants in this project realized that incorporating these strategies does not take away from the science content but can facilitate deeper student understanding and engagement. 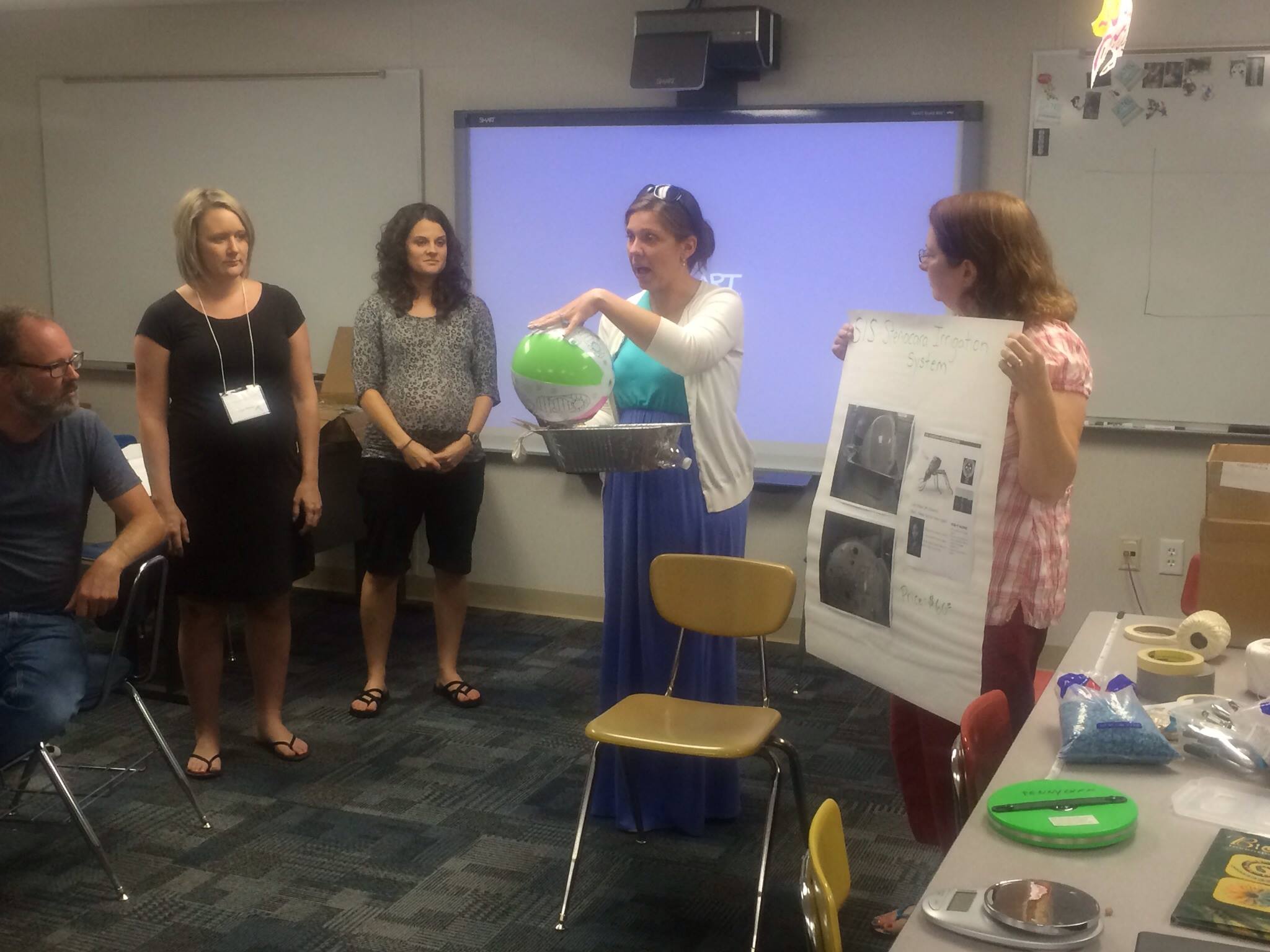 (Cookeville, Tenn.) Cynthia Rice, chemical engineering professor with the Center for Manufacturing Research, has been doing groundbreaking work in direct formic acid fuel cells for some time, leading to three patents and many peer-reviewed papers that have received more than 700 citations.

Rice began her research career working on methanol fuel cells for cell phones at Los Alamos National Labs as a post-doc in collaboration with Motorola. She then moved to her second post-doc experience at the University of Illinois in Urbana, Champaign. There, she setup a lab for direct formic acid fuel cells, optimizing high performance criteria.

“A start-up company was formed from the patents that she received with the University of Illinois,” Rice said.

Since then, she has been asked to be a co-leader for one of the three research thrusts on a Tennessee wide proposal to the National Science Foundation by one of the UTK/ORNL Governor’s Chairs to continue her work in direct formic acid fuel cells. The proposal was funded in 2010 under the title ‘Tennessee Solar Conversion and Storage Using Outreach, Research and Education’ (TNSCORE) under Thrust 2 ‘Components and Devices for Energy Conversion and Storage’ resulting in her publishing five research papers.

Her work has also helped her students earn recognition. Two of her students won awards during the Tennessee Tech Research Day in 2014. She has had a Ph.D. student graduate through projects on her work as well. Since 2010 she has been guide around 7 undergraduate students a semester in the scientific method through research project related to direct formic acid fuel cells. The research that she and her students is doing would help cell phones have 24/7 operational power supply lives. The direct formic acid fuel cells have a lot of energy with a small volume.

She and her team are continuing to make the fuel cells more efficient. She is now working with mass transfer to do so.

“We are also working on advanced flow-field fixtures with Mechanical Engineering,” Rice said.

This year, her students displayed five posters in the Tennessee Tech Research Day. She is currently preparing 11 students to present their research projects at the Statewide TN-SCORE conference in June.

(Cookeville, Tenn.) Physics Professor Raymond Kozub and his team have been using radioactive beams at the Holifield Radioactive Ion Beam Facility (HRIBF) of the Oak Ridge National Lab to measure the reaction rates of collisions involved in the explosions of stars. The project is titled “Nuclear Physics with Radioactive Ion Beams” and is funded by the U.S. Department of Energy.

The chemical elements, of which all known matter is composed, are produced in the explosions of stars, such as novae and supernovae, throughout the universe. These explosions are often so violent that neutrons, protons, or alpha particles can be added or removed from an atomic nucleus, thereby changing its atomic number, and thus its elemental form.

“For example, if a carbon nucleus captures a proton, the product is nitrogen,” Kozub said. “Protons and neutrons occupy discrete energy shells within a nucleus. Reactions can be induced by colliding a larger nucleus with a smaller one, and during the collision a neutron, proton, or alpha particle can be added to or removed from the larger nucleus. By measuring the energy and angle of emission of the left-over smaller particle we can determine the shell into or out of which the transfer occurred, and thus learn about the structure of the new large nucleus.”

Many of the collisions within these stellar explosions involve unstable (radioactive) nuclei since the processes occur so rapidly that the nuclei do not have time to decay to a more stable form between collisions. In order to understand these processes of stellar nucleosynthesis, and thus, to account for the observed relative abundance of the various elements and isotopes in the universe, it is necessary to measure the reaction rates for the various types of collisions, including those involving radioactive nuclei. In recent years, such measurements have been possible with the radioactive beams that were available at the HRIBF at Oak Ridge (now closed), and some are still possible at Argonne National Laboratory and Michigan State University. Continuing these measurements is one of the main objectives of this research. It helps us to better understand how the elements were made, and thus how we were made—we are all stardust!

“In addition,” Kozub said, “experimental information will be gained on the basic structure of atomic nuclei, especially for those exotic isotopes that have unusually large or small neutron-to-proton ratios. This information will help in the development of mathematical models that better describe the properties of exotic nuclei.” These types of models should, in turn, provide better input for the calculation of astrophysical reaction rates in cases where experimental data are not available.

The involvement of undergraduate students, which helps to provide the future science and engineering workforce for the nation, is an important component of this research. “Through this project, Tennessee Tech students have opportunities to participate in research activities at a world-class facility while interacting with scientists from all over the world,” Kozub said. After a summer of work, the students usually participate in an international conference where they present posters on their research.

“We serve nine counties of the Upper Cumberland,” Dangelo says. “We provide outreach to these regions through one-on-one counseling, free or low-cost workshops, and referral services if our clients need accountants, lawyers, etc.”

Clients have ranged from spa owners to bed-and-breakfast entrepreneurs, who have realized the value of one-on-one consulting support from people who are knowledgeable about what it takes to run a successful business.

Ed and Suzanne Buck contacted the TSBDC at Tennessee Tech with their dream to develop the Saltbox Inn as a viable business for hosting weddings, receptions, special events, casual tourists, and romantic getaways. With a few counseling sessions from John Woodard, who helped the Bucks assemble their financial projections and other information required to obtain financing for their business, the Bucks were well on their way to making the Saltbox Inn venture a reality, and now the Inn has grown into the ultimate Upper Cumberland hospitality venue.

“It was a pleasure to work with John at the TSBDC,” Ed Buck said. “Suzanne and I have loved meeting all our guests and appreciate our growing connection to the community.”

According to the TSBDC 2014 annual report, the entire nationwide network of SBDC clients generated $5.9 billion in incremental sales and generated $472 million in tax revenues. Accordingly, “America’s SBDC network is a cost-effective way to create jobs, grow the economy, and enhance America competitiveness.”

Small business is the economic backbone of the state of Tennessee, and therefore, the TSBDC’s mission is to be the “premier provider of quality solutions to potential and existing small businesses’ needs through consultation, education, referral and support services. By providing these services through its interactive network of resource partners, the TSBDC promotes growth and prosperity in the domestic and international markets of the business community and enhances its economic impact on the state of Tennessee.”