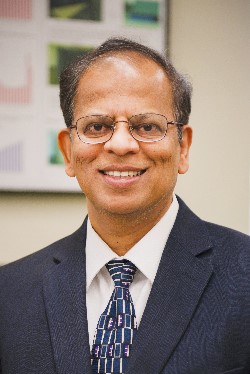 Dr. Mohan Rao (Ph.D. Auburn, 1988) is currently a professor and department chair of
Mechanical Engineering at Tennessee Tech, Cookeville, TN. Previously, he was a professor
of mechanical engineering at Michigan Tech. He is a Fellow of two major professional
societies in the field—ASME and SAE. He has conducted both basic and applied research
in different areas of acoustics and vibration ranging from analytical modeling of damping of
materials, joints, and composite structures to experimental work involving small power tools
to large scale machines (e.g. excavators, diesel engines). His research has been sponsored by
government agencies and industries that include NASA, NSF, ARL, State of Florida, Ford,
GM, Daimler-Chrysler, Caterpillar, TRW, Johnson Controls, John Deere, NIOSH, Arctic
Cat, Polaris, Xerox, and Volvo-Korea. He has over 100 publications in technical journals and
conference proceedings. Also, he has advised over 50 graduate students. Dr. Rao has
received the US Fulbright award, National Science Foundation Research Initiation Award
and was honored by the NASA Marshall Space Flight Center for his work on the damping of
the Hubble Space Telescope truss system. In addition, he was recognized as a United Nations Development Program expert in Noise & Vibration Control. He serves as an Associate Editor for the International Journal of Vehicle Noise and Vibration. He was awarded the 2011 INCE Outstanding Educator Award from the Institute of Noise Control Engineering, USA for his decades of outstanding contribution to noise control education.