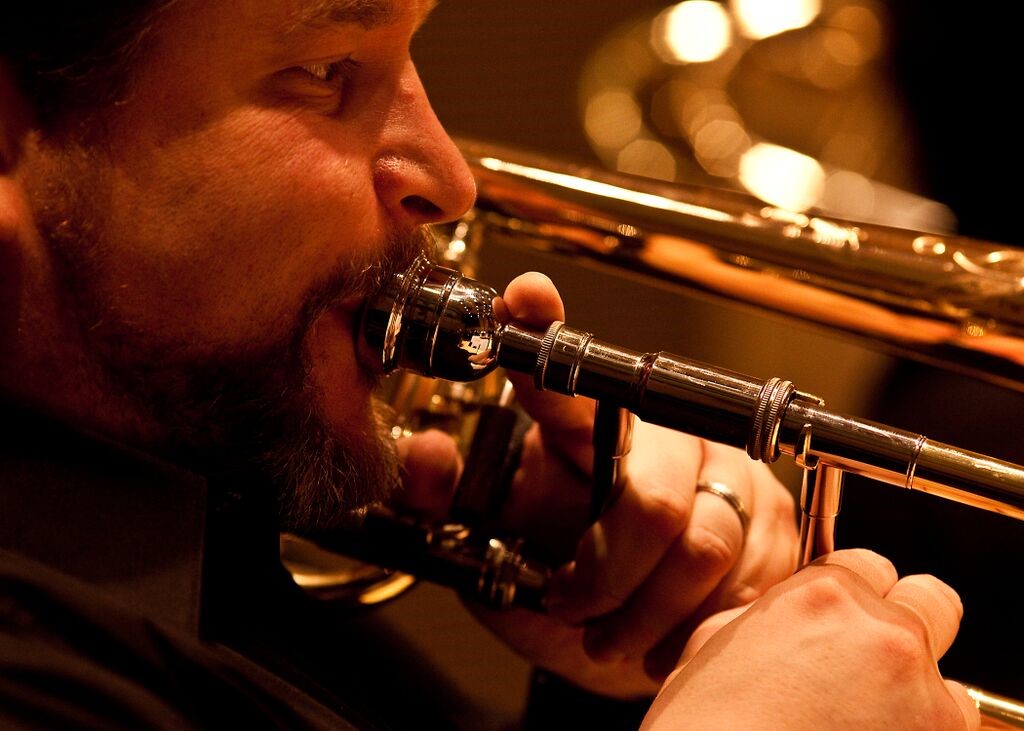 Joshua Hauser, Professor of Trombone at Tennessee Technological University, has performed extensively in styles ranging from classical to jazz and rock. He holds degrees from Oberlin College Conservatory, New England Conservatory, and the University of Georgia. He is an active performer on both trombone and euphonium, and has performed and recorded with numerous classical and jazz artists including the Nashville Symphony, Louisiana Repertory Jazz Ensemble (Marching, Ragging, and Mourning: Brass Band Music of New Orleans, 1900-1920) and Widespread Panic (‘Til The Medicine Takes).

Dr. Hauser has several compositions and arrangements for trombone ensemble and brass quintet published through Cimarron Music Press, Kagarice Brass Editions, and Music Express Publishing and his setting for solo trombone and wind band of Arrows of Time by Richard Peaslee, was premiered in March 2000 at the Eastern Trombone Workshop by New York Philharmonic principal trombonist Joseph Alessi with the U. S. Army Band, and has been recorded by Scott Hartman and the University of Georgia Wind Ensemble for Summit Records. His educational publications for 4-part trombone ensemble, Donut Etudes, v1 and v2, have received widespread acclaim for their use as ensemble coordination studies for trombones. Requests by educators and musicians have prompted a continuing project to create a series of coordination studies for other wind instruments.

In addition to his numerous arrangements and transcriptions for mixed brasses and jazz ensembles, Dr. Hauser has also done several arrangements for Winston Morris and the Tennessee Tech Tuba Ensemble, including Sister Sadie by Horace Silver, Sidewinder by Lee Morgan, The Arrival of the Queen of Sheba by G. F. Handel, and the Toccata from Symphony V by Charles-Marie Widor, all of which were recorded for Mark Records on the TTTE’s Play That Funky Tuba Right, Boy!, Carnegie VI and the upcoming Carnegie VIII. He was also a featured soloist and arranger on several jazz and classical compositions on Shazam! by the Brass Arts Quintet, also available from Mark Records. Dr. Hauser was the featured soloist on his own composition, EuPhunk for 8-part Euphonium Ensemble and Drums, as a member of Euphoniums Unlimited, a large euphonium ensemble project lead by R. Winston Morris whose eponymous CD was released by Mark Records in December, 2004.

Under Dr. Hauser’s direction, Trombones at Tech, the Tennessee Tech Trombone Choir, has performed at the opening ceremonies of the 2006 TNMEA conference, at the 2007 Eastern Trombone Workshop, at the 2011 Tennessee State Fair, and were invited performers at both the 2013 International Trombone Workshop in Columbus, GA and the Atlanta Trombone Ensemble’s 2014 International Trombone Week concert. Trombones at Tech contribute to their ongoing mission to encourage knowledge and appreciation of the trombone through the performance of works for multiple trombones through their performances, recordings and by bringing guest artists to middle TN. In recent years, they have hosted guest performances on campus by Joseph Alessi, Ron Barron, James Box, Brad Edwards, Tom Ervin, Bill Huber, Don Lucas, Matt Niess and the Capitol Bones, Quatour du Sud, Slide Company (Roy Agee, Chris Dunn, Barry Green, Josh Hauser, and Bill Huber, trombones), and the Trombones de Costa Rica. Trombones at Tech have produced two CDs on the Mark Custom Recordings label which are both available on iTunes and through major retailers: Areté and Christmas Trombones: Slidin’ into the Holidays.

Dr. Hauser’s current duties at Tennessee Tech include teaching applied trombone, music theory, and instrumentation; directing Trombones at Tech, the Tennessee Tech Trombone Choir; and performing with both the Bryan Symphony Orchestra and as director of the Brass Arts Quintet.