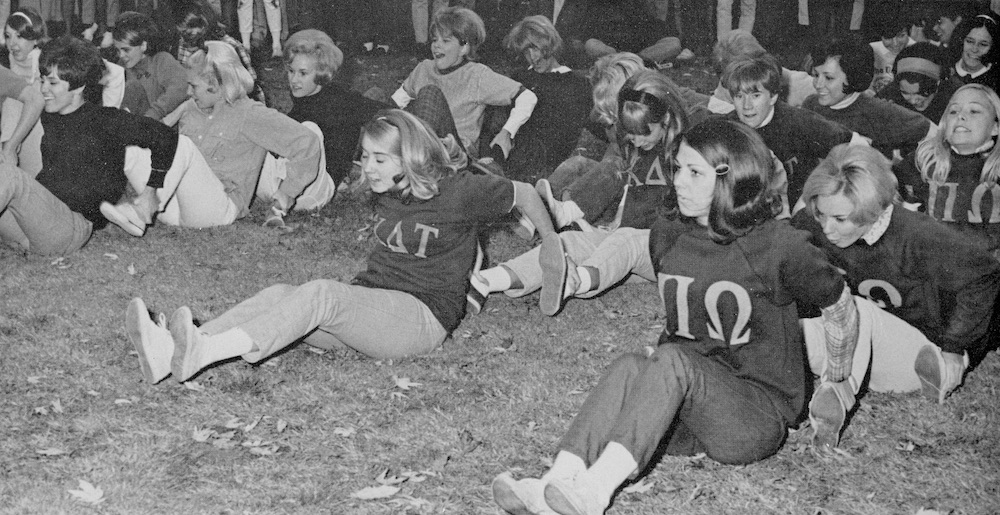 On November 15, 1956, approximately 200 male students attended a meeting in Derryberry Hall to hear student leaders discuss a proposal to establish a fraternity system at Tennessee Tech.  It would be another 13 years before Tech students would see official Greek organizations on campus.

Charles Dennis, ’69 business management and a member of Tau Kappa Epsilon (formerly known as Alpha Nu Delta), explained, “Derryberry’s rule for no fraternities had to change.  Fraternities and sororities had to be part of Tech.  Other universities had them.”

Prior to 1969, the Tennessee Tech student handbook stated, “Secret societies or fraternities are prohibited.”

Fraternity and sorority members met off campus to avoid being expelled from school for belonging to a non-campus organization.  How much President Derryberry knew or admitted to knowing about these secret societies remains a mystery; however, many alumni say Derryberry knew everything that went on at Tech.

“We called ourselves the IFC, hoping to be confused with the Interfaith Council instead of the InterFraternity Council,” he said.  “People would walk past our meeting room and tell us to say a prayer for them.”

Nearly half of the organizations that went national in 1969 are still in existence at Tech in 2019, and many celebrated their 50th anniversary this year with reunions to honor five decades of membership.

Today, nearly 1,000 Tech students belong to a fraternity or sorority.  Tech Greeks participate in more than 100 community service projects each year, 78 percent of Greeks are involved in two or more organizations in addition to their chapter membership, and 13 percent of Greeks hold leadership positions in a club or organization. Greek organizations have come a long way from having to operate in secret; today, fraternities and sororities have a strong public presence—both on campus and in the community.

1969 list of Tennessee Tech social clubs and the national Greek organizations with which they are affiliated: