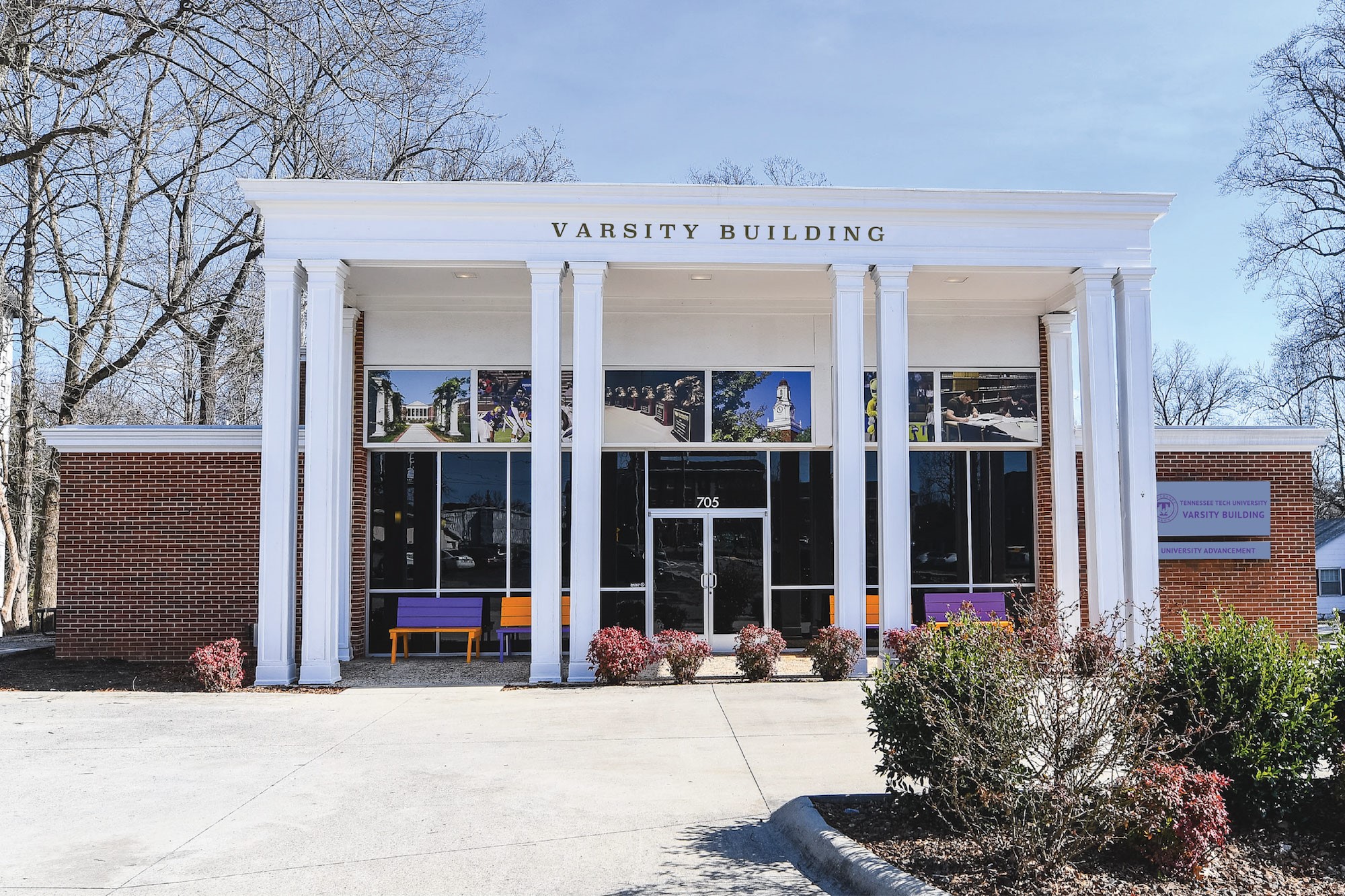 The building once known as the Varsity Cinema Theatre recently celebrated its 50th anniversary, and on Sept. 24, the Tennessee Tech University Board of Trustees voted to rename it the Varsity Building.

“It is not uncommon for alumni to refer to the building as ‘the old Varsity,’” said Brandon Boyd, Crawford Alumni Center director.  “Through this renaming, we can commemorate its legacy as a movie theatre and history with Tech and give it the official name alumni remember.  It is only fitting that this building, a true piece of nostalgia for our alumni, be named the Varsity Building,”

On Sept. 11, 1969, Leon DeLozier celebrated the grand opening of the Varsity Cinema Theatre, located on Dixie Avenue near Tennessee Tech. While not an official part of the university campus at the time, the theatre was an important part of Tech for many years. DeLozier made it a point to incorporate the architectural style of existing campus buildings, and the theatre essentially became an extension of the university.  DeLozier was already well-known in the movie theater business.  In 1961, he was hired to manage the Princess Theatre and for 20 years, he and his wife, Mary Jean, owned and operated every movie house in Cookeville.

The Varsity Cinema Theatre originally opened as a single screen theatre in 1969.  In 1979, DeLozier renovated and reopened the theatre as the Varsity Twin. Film distributors required major motion pictures to be shown for a minimum of four weeks, and DeLozier wanted to offer additional variety to his patrons.

In the 1980s, the DeLoziers sold all of the theaters to Consolidated Theatres of Charlotte, North Carolina, which allowed the couple to concentrate on civic and volunteer activities, including the historic preservation of downtown Cookeville.

In 2001, the Varsity Cinema officially closed its doors and ceased operations as a movie theater.  Soon after, it was renovated and converted into a creative marketing agency.

In 2014, Tennessee Tech purchased the building and designated it the Alumni Building.  Today, it is home to University Advancement (including the Crawford Alumni Center, University Development, and Advancement Services) and serves as the headquarters for the Alumni Association.

Tech President Phil Oldham supported the renaming because it brings a familiar and welcoming name back to campus.

“This is one example of how we honor the close ties the university has with the community,” Oldham said. “At the Varsity, memories were made of good times at Tech and in Cookeville. We are so glad to be a part of keeping the memories alive.”

While the building has served in different capacities throughout the last 50 years, its legacy as a movie theatre remains.

“As soon as alumni enter the building, they immediately begin to talk about the movies they saw here,” said Boyd.  “They reflect on their time as Tech students, which is a great icebreaker and way to connect.  Many alumni went on their first date here—a date that often led to marriage.  This is such an important piece of not only Tech’s history, but Cookeville’s history as well.  It is an honor to be a part of the history of the Varsity Cinema.”

To celebrate the 50th anniversary and renaming, the Varsity Building currently has an exhibit of movie memorabilia on display, including newspaper clippings from when the theater originally opened, the ledger where DeLozier tracked movie rights from film studios, original film reels and more.

The Varsity Building is open Monday through Friday from 8 a.m. to 4:30 p.m. and is open to the public.