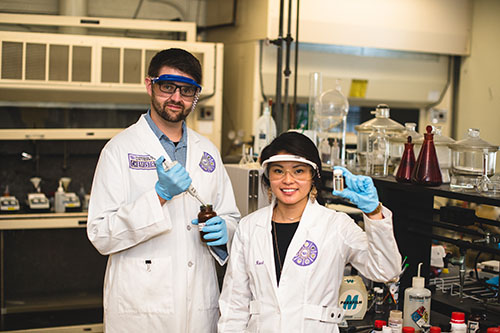 I worked with a couple pharmacists who had been to Tech, and they said among professional schools Tech is recognized for producing well-prepared students, Martin said. That gave me confidence to know that if I could do this, I could be accepted anywhere.

And when it comes to getting into professional schools, the application and interview process can be tough.

Marina Naguib, who will also receive her bachelor s degree on Saturday before heading to the Southern College of Optometry in Memphis, remembers the feelings she had before her optometry school interview.

I was very nervous, Naguib said, but I talked with my advisor, who told me what to expect and did a practice interview with me. That was so helpful and made me feel so much better.

Naguib knows that it s easy to become discouraged or be intimated by the idea of applying to tough professional programs, but she says she felt encouraged by everyone she encountered at Tech.

Through the Chem-Med Club, I got to meet with an optometrist who talked about how she struggled through getting into school, Naguib said. She gave me hope that even if I didn t make it the first time, I could do it.

Shikha Amin will take her degree in chemistry from Tech with her to dental school at the Medical University of South Carolina, but it is more than just her degree that she will carry with her.

I think classes have prepared me to do well, Amin said. I have had such great relationships with all of my professors. That s what I love about the chemistry department. It is like one big family. The faculty and staff really see the good in you.

Add that to the undergraduate research and teaching assistant opportunities that she s had and Amin says she is confident moving on to dental school.

Like Martin, Lana Ngo didn t have to have her bachelor s degree to get into pharmacy school.

I wanted to it, Ngo, who has been accepted to the pharmacy program at the University of Florida, said. Especially here, being in the chemistry department, the relationships and encouragement I have had is worth all of the hard work I have put into it.

Health sciences at Tech is not a degree granting program, though many students in the program earn degrees. It is designed to allow students to follow a curriculum path that meets their interest and ultimately makes them well-rounded candidates for professional health schools.

The professors here are totally on your side, said Emily Carney, who is headed to the pharmacy program at Belmont University after finishing this semester at Tech. They want you to learn and to be able to share that knowledge in your future job. They are here to be your teacher but it s more than that. They take so much pride in your education and it is extremely encouraging.

Health sciences students get personalized advisement within the chemistry department to ensure that the work they are doing at Tech will take them to where they want to go.

They make sure you get the classes you need in. They remember your name. They know you. They remember what your major and concentration is, Martin said. I never felt like I was doing this alone.

And they have a reputation of doing that well.

When I went to my two interviews for pharmacy schools, the first thing they would say is, I see you went to Tennessee Tech. We like Tech students, Martin said.

While the classes were tough and the interview process for their next steps was intimidating, the students agree that the faculty and staff at Tech did right by them.

They start you out running and if you never stop running, you don t know that you could ve ever walked, Martin said.