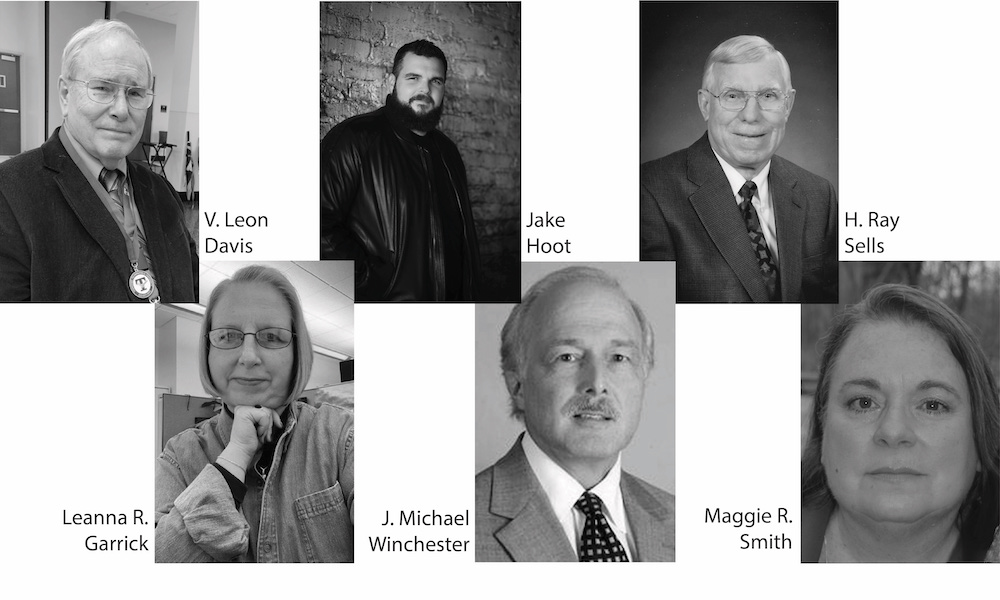 Tennessee Tech’s Alumni Association recently honored six individuals who have demonstrated professional success, received recognition and instilled great pride among the faculty, students and alumni of the university. The honorees accepted their awards, delivered speeches and mingled with friends and family in a virtual reception on April 9.

“I am extremely proud of the accomplishments of each and every one of these alumni award winners, and they are all great representatives and ambassadors for Tennessee Tech,” said Tech President Phil Oldham. “I thank each of them for all they have done and continue to do for their alma mater.”

Jake Hoot, `13 interdisciplinary studies, amassed a fiercely loyal following during his time on Season 17 of NBC’s The Voice. In November, Hoot released a cover of “La Bamba” as his lead-off single, which landed in the Top 10 on the iTunes Latin charts, and in January, he released his debut EP featuring a duet with Kelly Clarkson titled “I Would’ve Loved You.”

Hoot credits Tech for much of his career success. At age 20, he moved to Cookeville, Tenn., and attended Tech as a walk-on football player. During his time as a student, he participated in open mic nights at Tech’s Backdoor Playhouse and started playing music at local businesses in the Upper Cumberland.

“I remember meeting coach [Watson] Brown and Coach Sam [Williamson] and walking around the campus and meeting the people here,” said Hoot. “There was no question about it. This is where I needed to be.”

Maggie R. Smith, `82 animal science and `90 agricultural education, works with food manufacturers, food processing plants and farms to ensure compliance to food safety and animal welfare regulations and guidelines. In 2015, she started Viand Group LLC, comprised of subject matter experts in animal and food agriculture, production and processing. She is the author of Marvelous Morsels:  Unique Food Gifts for Year-Round Giving. Smith connects agriculture students and professors with industry personnel, mentors students and provides advice and feedback in her areas of expertise.

“It is an honor to join the 56 others who came before me to win this outstanding service award,” said Smith. “I am proud to join you as number 57. I am proud to be of service to Tennessee Tech. I’m proud to have accepted the challenges of my career and pave the way for future generations.”

Leanna Garrick, `86 business management, is a business solutions advisor with more than 38 years of experience supporting hardware, software and networking configurations in the areas of data processing and information systems management. Currently, she is a member of the incentive compensation team that supports the FedEx Global Sales organization in Memphis, Tenn. She and her husband Jim are avid supporters of Tech’s Student to Career Center and the Eagleworks Innovation & Entrepreneurship competition and program.

“Tech became my home and even now, when I step on campus, I get that familiar, comfortable feeling of being back home,” said Garrick. “Memories of living in the dormitory, learning in and out of the classroom, interacting with instructors and administrators, making lifelong friendships and even meeting my future husband are the lasting impressions of my time at Tech. Attending Tech provided me with the opportunity to learn and grow in an atmosphere that offered guidance and security while preparing me to begin my working career. To honor the education I received, I have always felt it was my responsibility to provide support to the university and the students who attend.”

H. Ray Sells, `57 mechanical engineering, has supported Tech’s Department of Mechanical Engineering for 37 years. Sells retired from NASA’s Marshall Space Flight Center in Huntsville, Ala., after a 34-year career with the Saturn Apollo Space Program, Skylab Program and Space Shuttle Spacelab missions. He and his late wife Doris established the Ray and Doris Sells Family Mechanical Engineering Program Development Endowment to support Mechanical Engineering at Tech. In 2016, in appreciation for the Sells’ generosity, the department named a classroom in Brown Hall in their honor.

“Tech laid the foundation for the rest of my life with a fine job, the ability to support my family and the means to give something back,” said Sells. “I’m in the latter part of my economic life consisting of learning, earning and returning, all of which are open-ended. Tech was the focus of my learning years. I spent most of my earning years working at Marshall Space Flight Center. Now I’m in my returning years.”

J. Michael Winchester, `75 history, attended Tech on a baseball scholarship and graduated first in his College of Arts and Sciences class. He was the first recipient of the Derryberry Award, which is presented to the most outstanding graduating senior each year. Winchester is a founding member and president of the law firm Winchester, Sellers, Foster & Steele. He established the Winchester Lecture Series and Scholarship Endowment to support a series of lectures and provide scholarship support and professional development for history majors. Winchester was inducted into Tech’s Sports Hall of Fame in 1996.

“I walked away from Tennessee Tech with a wonderful experience, so I knew that when I got to a position of being able to give back to the school, I wanted to do that,” said Winchester. “I wanted other young people to have the opportunity to make the best decision of their young lives, like I did, to go to a quality school. Where you go to school and where you invest your time and where you pursue your career and opportunities is the most important decision you can make as a young person. And I was lucky that I ended up at Tech and had the opportunities that I had.”

When V. Leon Davis, `69 electrical engineering, was honored at Tech’s Golden Grad Reunion in 2019, he had 50-plus years of successes to celebrate. As a student, Davis served as a dorm officer, electrical engineering lab technical assistant, officer of Etta Kappa Nu and even Tech’s mailman. But his proudest moment was having his senior project featured in the “Summer School at Tennessee Tech” pamphlet. Davis joined NASA’s Kennedy Space Center to work on LEM #5, the “Eagle” of the Apollo 11 Moon Landing Mission. During his 36-year career at NASA, Leon worked on Apollo 11 through 17, Skylab 1 through 3, and Apollo-Soyuz for a total of 130 NASA Shuttle flight missions.

“I went to a high school whose mascot was a gray eagle,” said Davis. “I went to this university whose mascot was a golden eagle. And my first job was working on the Eagle, the first lunar lander of Apollo 11 fame. So, I guess growing up and going to school enabled me to fly with eagles in my life’s work.”

See the Difference You Can Make at Tennessee Tech