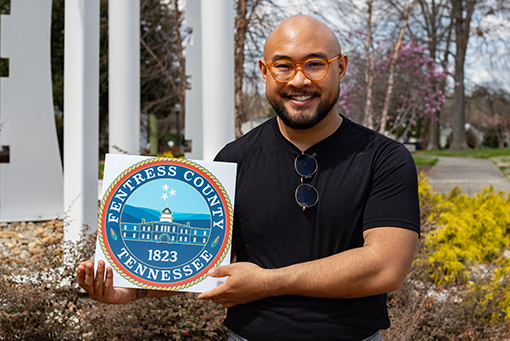 The Fentress County Chamber of Commerce and Fentress County Executive’s Office has had the fortunate opportunity to create an original Fentress County Seal for the first time through the assistance of Tennessee Tech student and Center for Rural Innovation intern, Jesse Filoteo. On February 22, 2021, the Fentress county commission, unanimously voted for the seal to officially represent the County.

Fentress County is a rural county in Tennessee full of natural beauty, entrepreneurial spirit, and growing industries. Before July 2020, the county was considered an economically distressed county, yet since July they have been elevated to an at-risk status and the community has been continuously growing ever since. Tennessee Tech has a long history of working with Fentress County and all surrounding rural counties to raise prosperity levels. One way that Tennessee Tech supports the resiliency of surrounding rural communities is through its Center for Rural Innovation (TCRI) whose mission is “to create companies and build economic development by providing technical assistance to main street businesses and entrepreneurs within the tourism, technology, innovation, retail, and agriculture sectors.” TCRI employs student interns to work on technical assistance initiatives including web design, graphic design, social media, and more.

After reaching out to the Center for Rural Innovation in 2020 regarding the need for an official government seal, the Fentress County Chamber of Commerce connected Executive Jimmy Johnson and his assistant Amanda Hicks with TCRI. Michael Aikens, TCRI Director, assisted Fentress County in developing their ideas for a seal and then connecting them with Tennessee Tech student designers to collaborate on the implementation and creation of that idea. The Fentress County Executive’s Office worked with Tennessee Tech Graphic Design student Jesse Filoteo to create an official seal that the county would not only be proud of, but which would also capture the spirit of Fentress County within a recognizable design. Regarding the finished seal, Hicks states, “We knew this final design would fit perfectly for Fentress County.”

To develop the seal, the Fentress County Executive’s Office held a series of meetings with Tennessee Tech students and staff to communicate exactly what they wanted to express within the county seal. Their overall goal for the seal was for it to feature Fentress County’s beautiful landscape, agriculture, and history. Hicks states, “The inspiration for the logo was the natural beauty that Fentress County offers along with the Sandstone Courthouse that is 115 years old.” Through the brainstorming process of developing the seal, Filoteo utilized what he learned at TN Tech to create a design that he believed would impact the county and his own future in design.

Jesse focused the initial design process on research and following the creative direction of the client to make general aesthetic decisions that would result in the government's official seal. He states, “the research process for this project was a great deal of understanding the rich history of the region and what kind of identity the county should have.” Jesse then created several sketches of different design concepts. By using Photoshop and Adobe Illustrator, Jesse was able to create a more precise logo and work with Fentress County to pinpoint exactly what the county seal needed. Jesse noted that the feedback he received from the board was integral to the seal’s creation. Through feedback, he realized that they preferred a more clean-cut approach to the seal, which set up the groundwork for more creative solutions. He states, “I’m happy to say I think we’re all very pleased for this seal to represent Fentress County, Tennessee.”

Regarding his internship with the Center for Rural Innovation, Jesse states, “The design internship with the Center for Rural Innovation is really a gem. I’ve worked with so many different clients that I am having to make difficult decisions as to what to put in my portfolio rather than this mad-dash to fill in gaps, like some of my peers experience before graduation.” He described how this opportunity has given him experience in the field of graphic design pre-graduation, putting him a step ahead. Jesse states, “As for preparation for the ‘real world’, it kind of is the real world. We work with real clients and real people and real communities- and my work is out there. I mean I have a billboard, logos, and a number of other things I’ve been fortunate enough to be a part of which is amazing- not to mention this seal. There’s something really special about talking to a design firm and mentioning something you’ve done only to find that they are fully aware of it, you know? I really wouldn’t be here without Andrea, Michael, and the program.”

The Fentress County Executive’s Office and County Commission held a press release celebration for the official unveiling of the county seal on Friday, March 12th, at 10 am in Jamestown, TN. Executive Johnson states, “I am so proud to finally see an official seal presented to the citizens of Fentress County that will stand the test of time and last for generations.”