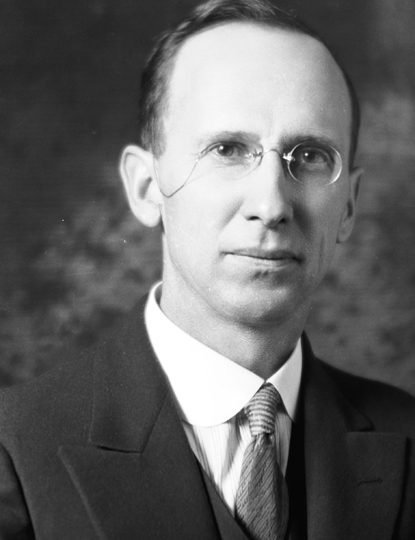 As earnest as he was energetic, Tennessee Polytechnic Institute's first president, Thomas Alva Early, intended public higher education to be accessible to all of the Upper Cumberland's students.

Here, in his own words, is Austin Wheeler Smith, TPI's first history professor, who would go on to be registrar, dean-registrar, and acting president during his 35-year tenure at Tech.

"It was the president's idea that the cost of board could be reduced by cultivating a large garden. Consequently, for a number of years the space about where the Engineering Building [now Henderson Hall] is located was used for that purpose. The practical work students constituted the major part of the labor needed for cultivation, gathering and canning. But there was one hitch. The vegetables were usually ready for canning during vacation when the students and most of the faculty were away. There still exist some pictures of Dean Daniel [Charles D. Daniel, first dean of faculty] and his wife stringing beans for canning.

"Beans and apples were often bought by the wagon load, canned and stored in the basement of East Hall [now Kittrell Hall]. The first such effort ended disastrously. The president employed what he thought was an expert for that purpose. Tin cans were just then supplanting the glass cans. Several loads of apples were canned and stored. Soon after school opened the girls came running all excited out of East Hall declaring that the Civil War had broken out again. It certainly was uncanny to hear the last can of those apples uncan themselves with a cannonading effect. All were helpless. When a person went in, a can exploded, and he was a fit subject for the old swimming hole. After there came a surcease of explosions, the room was an effervescing loblolly of sour apples."

Return to "In the Words Of"