A three-time Outstanding Faculty Award winner at Tennessee Tech, Gordon Hunter was named Tennessee Professor of the Year in 1990 by the Council for the Advancement and Support of Education. He chaired the Biology Department for several years before settling down into his role as a biology professor, and he was best known for his lecture hall impersonations of Charles Darwin, Gregor Mendel and other scientists who changed the world, including Linus Pauling, a two-time winner of a Nobel Prize -- once for the discovery of the molecular structure of proteins and again for his resolute stand against atomic bomb testing. Not long after retiring, Prof. Hunter gave what could be the most inventive commencement address in Tech's history; channeling Pauling, Hunter gave lessons in biochemistry, relationships, and spirituality. 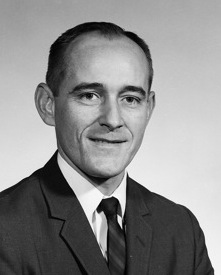 "In my own mind, as a child, I was already a chemist in that small town in Oregon where I grew up. I remember the thrill when my mixtures of chemicals from my father's drugstore shelves exploded as street cars ran over them on the trolley tracks. That boyish excitement, however, cannot be compared to the feelings I had when I discovered the right answers to the nature of the chemical bond and to the structures of the protein molecule.

"Because I had found the right answers, my professional life was a success. But I have to admit that in spite of all the medical applications that have been made of my discoveries, altruism was not my major motivation. I was driven to solve the bond and protein problems because it was fun.

"I guess I've always been considered somewhat of a maverick. Nevertheless I have been successful in making lifelong friends. If it hadn't been for friends who loaned me money or found me jobs, I never would have finished college. And the support of close friends was so helpful in my painful recovery from the devastation of [my wife's] death. During the atomic bomb testing, when it seemed the whole world had turned against me, only my good friends stood by me.

"Had I neglected the spiritual part of my life, millions and millions more might be suffering from genetic defects because I'd never taken a stand against atomic bomb testing. Although I revere all of nature, marveling at the manifold processes going on in our universe, I recognize life as the culmination of creation and love as its ultimate expression.

"Regardless of any affiliation or lack of affiliation we have with formal religion, we need to settle the question of how we fit into the universe -- and more importantly, how we fit into the community of man. When we know who we are spiritually, we can act automatically, knowing we are doing the right thing. My spiritual values demanded that I show love and respect to my brothers and sisters regardless of their beliefs, race, intellect, social and financial standing or any other quality they possess. I hate hate and I am prejudiced against prejudice."

-- Gordon Hunter, from his commencement address to Tennessee Tech's class of 1996.

Schedule Your Visit
Apply Give Visit