Marie Ventrice, in 1974 the first doctoral candidate to graduate from Tennessee Tech, went on to be associate dean of Tech's College of Engineering. Before retiring in 2000, she administered a National Science Foundation grant program that encourage women to study engineering. 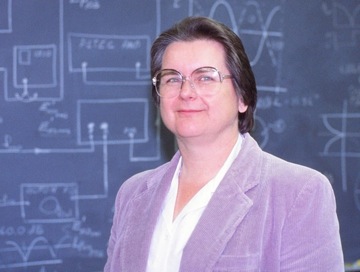 "My father tried to dissuade me by telling me most employers wouldn't hire me. That didn't matter to me. I would work hard, I would do excellent work. These attributes would overcome any hurdle. The first engineering school to which I made inquiry about admission told me that even though the rest of the university admitted females into its programs, the engineering school would not. I was told having girls in engineering classes would distract, disrupt and interfere with the male students' education. Up until then I hadn't realized what power I had!

"I was accepted by and enrolled at Penn State. Penn State was not completely thrilled to have me. As a counselor put it, 'Penn State doesn't want to waste an engineering opening on a girl. Girls aren't serious students. They drop out. They get married. They have children. They don't use their education.' Say what?

"I found college challenging and enjoyable. My experience was somewhat different from the guys', but I didn't dwell on such things. For example, the guys studied at night. I couldn't join them because to 'protect' us, females were required to be in their dormitories at night.

"True to those predictions about 'girl' students, I got married, had a child and dropped out. I had completed only half of my undergraduate education when my husband received his Ph.D., accepted a job elsewhere, and we moved away.

"Later, we came to Tennessee Tech - he as a faculty member, me as his wife. He encouraged me to enroll. I did, and an amazing thing happened (amazing to me, not to anyone else). I was admitted without any grilling about the seriousness of my intentions. I was treated like all other transfer students. Tennessee Tech was OK.

"Why is it important that we encourage women to pursue nontraditional careers? (I emphasize women because I am one. Much of what I say applies to African American and other minorities also.) If we restrict some areas to white males only, we lose the benefits of all the insight, understanding, inventiveness, creativity, intelligence, quickness, initiative, hard work, and everything else that those who are excluded have to offer. If we restrict people's options, we constrict their minds and their lives. We throw away and destroy valuable resources. And engineering is a challenging, satisfying and rewarding profession; so why should only the guys get to participate?"

Return to "In the Words Of"