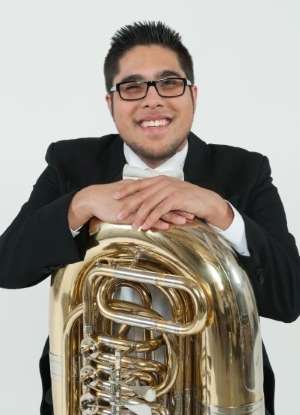 Dan Davis recently joined the faculty at Tennessee Tech University as the Adjunct Instructor of Tuba in 2019. At TTU, Davis' responsibilities include assisting with the world-famous Tennessee Tech Tuba Ensemble, coaching chamber ensembles, teaching private lessons, playing in the “Brass Arts” Faculty Quintet as well as holding the principal tuba chair in the Bryan Symphony Orchestra, the regional orchestra located in Cookeville, TN.

Originally from San Jose, California, Dan received his Bachelor of Music Education degree from Louisiana State University in Baton Rouge, LA and his Masters of Arts in Curriculum and Instruction with a Music concentration at Tennessee Tech University in Cookeville, TN. His primary teachers include Tony Clements, Dr. joseph Skillen, and R. Winston Morris.

In his solo career, Dan has performed throughout California and in different parts of the country, including Louisiana, Texas, Arkansas, and New York. He has placed in the final round for both the LSU Concerto Competition and the Delta Symphony Concerto Competition. In 2016, he was awarded 3rd prize in the Great Composer's Competition, an international solo competition for brass and woodwind players. He has performed numerous masterclasses in middle schools, high schools, and universities around the world, including a masterclass at the Moscow Conservatory in Russia.

In March of 2017, Dan was offered the tuba chair in the internationally-acclaimed chamber ensemble "The King's Brass." This 9-piece sacred brass ensemble tours for around 20-23 weeks out of the year playing over 150 concerts at churches and performance venues around the world. Performing with this group has allowed Dan to play in 34 states and the Caribbean Islands.

Davis’ professional associations include NAfME, LMEA, Pi Kappa Lambda and ITEA. Dan is proud to represent Miraphone instruments as a Miraphone Artist. He currently plays on a 186 CC tuba and a "Petruschka" F tuba.