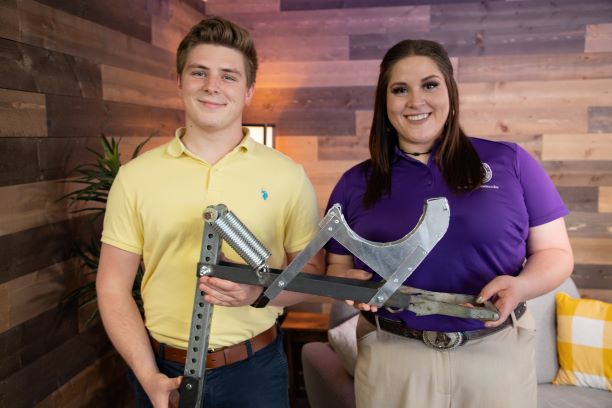 Congratulations to the team Ratchet Rats for winning Tennessee Tech University’s (TN Tech) 2021 Eagle Works Innovation & Entrepreneurship Competition on Saturday, April 10th. Like the television show ABC’s Shark Tank, Eagle Works allows TN Tech undergraduate and graduate students to pitch innovative, problem-solving business ideas to a panel of judges for a chance to win a portion of over $20,000 in scholarships. For the second year in a row, the 2021 competition was held virtually via Zoom, as opposed to the prior six-year streak of being hosted live on campus.

The first-place award of $10,000 went to Chelsay Burns, an Agriculture major, and Aaron Lawson, a Mechanical Engineering major, for their company Rachet Rats. Specifically, Burns and Lawson pitched their device the Quick Toss Pro, that launches a ratchet strap over semi-truck flatbed trailers as well as flatbed trailers for the agriculture industry. The Quick Toss Pro was designed to be easy to use and lightweight, making it easier for customers to carry it. Burns was inspired with the idea because of her experience growing up farming. After putting up hay all day, Burns realized that throwing ratchet straps to tie down a load was challenging and knew there had to be an easier way to do it. Lawson had been working with Burns behind the scenes to create this idea, and he officially joined the team in Fall 2020.

Regarding Eagle Works, Burns stated, “It’s a competition that helps find the entrepreneur inside of us all. It is a great experience to learn and grow as an individual and is worth the work that you will put into it.” Regarding the team’s idea, Burns said, “I just want to share the truth behind how all of this got started for the Ratchet Rats. One of my agriculture professors took my class to a hay field to talk to us about entering the Fall 2020 Agriculture Innovation Challenge. He told us we had nothing to lose by entering. I went home to work on the farm that weekend and thought about what my professor said. Next thing I knew, my friend and I had won the Eagle Works competition.” Lawson also is thankful to have participated in Eagle Works. He stated, “Before this competition I had little to no experience building or designing anything. Coming out of it, I now have real world experience using the things that I was being taught in class and hearing about. This competition gave me the opportunity to develop skills that I will use for the rest of my life and really test my knowledge as an engineer. I urge anyone who is even thinking about the competition to enter. It is an awesome experience no matter what field you’re in. Plus, you never know, your small idea that you think might be nothing could turn into a 1st place winner.”

Womack was inspired to create the idea due to her experiences in using planning systems to help her sister, who is on the spectrum, plan, organize, and keep track of their schoolwork. Similarly, Womack’s partner, who has ADHD, used the same system as NeuroBright to help him successfully keep track of schoolwork and reduce a lot of his anxiety about school. With the help of a planning system, Womack’s sister will complete their first year of college this May, and Womack’s partner is set to graduate with his bachelors next Fall. Womack encourages all students, specifically those in education, to compete in Eagle Works: “As an educator, I have never seen myself as an entrepreneur. However, educators are constantly innovating in the classroom by designing specific instructional material for students to engage with, and that’s what inspired me to create the NeuroBright Planner. I saw that neurodiverse college students did not have the appropriate resources to plan, organize, and keep track of their assignments, so I met that need by creating a planner with their needs in mind! Now, I can see myself as an educator and entrepreneur, and I hope it inspires other education students to do the same, because there are more amazing ideas out there that needs to be designed and distributed to help other students.”

Brandon Pierce, an interdisciplinary studies major with focuses in Business management and environmental sustainability, won both third place of $2,500 and the Rural Reimagined award of $1,500, for a total of $4,000 in scholarships. His multiple award-winning idea was Pure Legacy –Future Innovators, which presented the mission of engaging, educating, and advancing the skill sets of future innovators. Specifically, his pitched idea represented a branch of business under his Pure Legacy business, in which he wanted to focus on developing STEM events in rural Appalachian communities to bridge the gap between the university and local school STEM growth.  Pierce’s innovative idea that helps develop more STEM competitions, educators, and education within the Appalachian region, granted him the Rural Reimagined award, which goes to the idea that most benefits rural areas.

Regarding his idea, Pierce noted that he was inspired from a Ted talk in which the speaker had made a large company from one product that collected plastic in the ocean. He realized that he was meant to build a company that provided rural students with limited access to career advancement with a way to grow their skill sets and understanding, which would allow them to be more prepared for college with a resume of experience. Pure Legacy would act as that company, and Future Innovators would increase the amount of STEM education within rural schools and communities. Regarding Eagle Works, Pierce stated, “It’s a great way for you to take an idea, gain feedback, and learn ideas to advance it from other teams’ ideas or practices. From the competition I gained insight of some small things I needed to look at more in-depth and practice of pitching my elevator pitch. The competition is like no other one I have been in!  Eagle Works isn’t just about the competition, it is about growing a better foundation!”

The Robert Osbourne Clouse Innovation award of $500 went to Austin Marler for his Elastic Anatomy idea, who demonstrated the spirit of innovation in his project presentation. Marler brainstormed a model that would allow medical students to more intuitively study human anatomy in addition to providing artists with a way to pose a human figure that could flex and articulate like a live being. Marler is a junior in mechanical engineering with a focus in mechatronics and was inspired to develop the idea after observing his roommate struggle with anatomy and his own struggle in sketching the human form. For Marler, Eagle Works allowed him to learn and practice entrepreneurship with hopes of gaining needed funds to propel his idea and subsequently assist him in paying off tuition. Marler encourages more students to get involved with Eagle Works and states, “I personally gained an in-depth look at the evaluation and planning of a small business. I am overjoyed that I was able to follow along with Eagle Work’s program and develop a better understanding of entrepreneurship.”

The second Clouse-Elrod Foundation sponsored award was the Virgie Elrod Clouse Creativity award for a team who demonstrated exceptional creativity in their project presentation or prototype. Chemical Engineering majors Kishan Patel and Emmanuel Gumban won this award of $500 for their CICE Solutions idea, in which they prototyped an innovative product that can help fight pollution. Specifically, Patel and Gumban synthesized a chemical product that, through utilizing chemistry and analytical engineer, can purify even the most hard-to-recycle waste.

The Clouse-Elrod Foundation Social Entrepreneurship award of $500 for the project with the greatest social impact went to Linda Johnson for her Neal Creek Retreat idea. Johnson plans to establish a marriage retreat, re-creating the Garden of Eden at her 18-acre, secluded, country retreat in Belvidere, Tennessee. Johnson stated, “I would like to thank Mr. Wil Clouse and the Clouse-Elrod Foundation for supporting Tennessee Tech students in their endeavors. I am truly honored and grateful to have been chosen to receive the Social Entrepreneurship award. And, I would also like to thank Andrea and Michael with Eagle Works for their assistance and advice regarding the competition. I learned a lot and feel I was able to develop a workable business model as a result.”

Congratulations to all the 2021 Eagle Works winners and competitors. Not only did Eagle Works provide TN Tech students with an opportunity to brainstorm how they could make a difference in the world and participate in something meaningful through innovative thinking, but it also awarded thousands in scholarships. All TN Tech students are encouraged to compete in Eagle Works and learn how to be an innovative entrepreneur. Follow this link to watch the 2021 virtual competition: www.tntech.edu/eagleworks. Wings up!