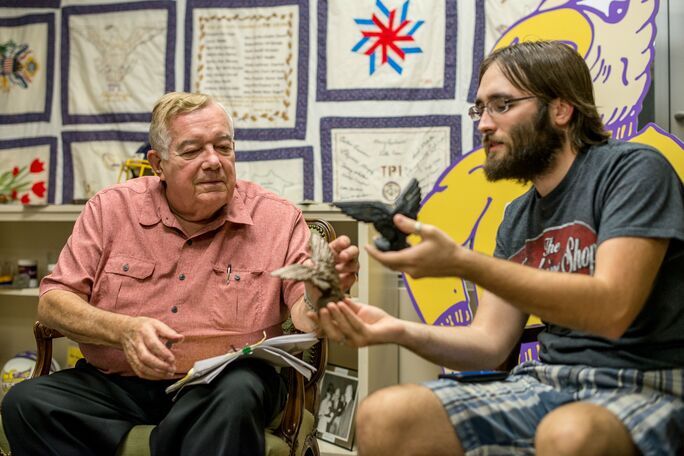 Tom Moran, `58 physics, will serve as grand marshal of Tennessee Tech’s homecoming parade. And while some Tech alumni may not immediately recognize his name, they will certainly recognize the impact he made on campus.

In 1965, President Everett Derryberry had an idea to create an office specifically focused on alumni relations and fundraising. Moran learned about the job from a friend and decided to apply.

“I still have the letter from President Derryberry offering me the alumni job,” said Moran. “I had grown up in Cookeville. I knew many of the alumni and faculty, and I was excited to come back and work with them.”

Moran served as Tech’s very first alumni director from 1965 to 1968 and says he was fortunate to receive unwavering support from Derryberry as he built Tech’s alumni program.

“I have nothing but praise for President Derryberry,” said Moran. “I have always felt fortunate to have known him personally. He was a lot of things to a lot of people.”

But perhaps what Moran is best known for is what he calls his five minutes of fame, or “the great eagle heist of 1952.” Those five minutes of fame have turned into a 70-year Tennessee Tech tradition: the true story of how the eagle came to sit atop Derryberry Hall.

In 1952, in the middle of the night, Moran and friends Roy Loudermilk and Lewis Brown drove to the Monteagle Hotel in Monteagle, Tennessee, removed the eagle from its post in front of the burned and abandoned hotel and brought it home to Tech. For decades, this eagle has watched over campus from the top of Derryberry Hall. Today, a full-scale replica of that eagle is perched atop the Derryberry clocktower, and the original eagle that Moran and his friends acquired is preserved in an undisclosed location on campus. While Moran is the only surviving member of the “eagle-acquiring trio” and the mastermind behind the heist, he credits Loudermilk and Brown for their help on that infamous night.

“I am proud that this story has become part of the Tech tradition,” said Moran. “Regardless of how you describe the means of acquisition – steal, liberate, acquire – I am very happy to have done it.”

Moran says he was shocked when Tech asked him to be the grand marshal of the homecoming parade.

“I was surprised and extremely honored that anybody would even think of asking me,” he said. “I look forward to reminiscing and interacting with everyone. And I hope I can tell my story to the students – the next generation of Tech alumni.”

Since 1952, the eagle on top of Derryberry Hall has become a symbol of Tech pride. With a theme of “Tech back in time: homecoming through the decades,” it is fitting that the first alumni director and the man behind one of Tech’s most enduring legends will lead the parade this year. The university has Moran to thank for so many of the events, traditions and stories that alumni and students enjoy today.