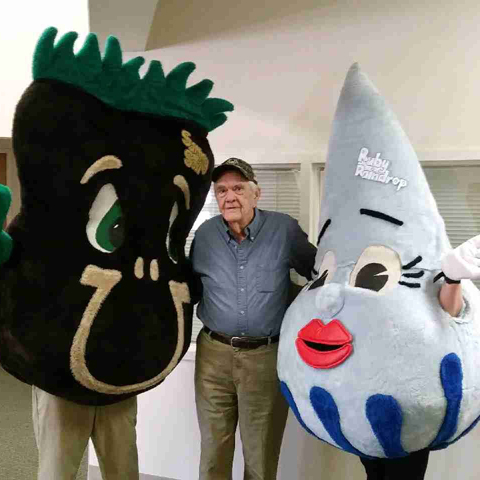 When Ernest “Howard” Whitaker dreamed up—literally—the conservation character Sammy Soil, he never could have imagined that 50 years later, Sammy would have educated tens of thousands of students across the country.

In 1968, Whitaker had a dream two nights in a row about a character named Sammy Soil who resembled a clump of earth.  He got up in the middle of the night and started sketching.  The next morning his wife, Nell, asked him what he was working on.

“This little character has been talking to me for two nights,” he said.

Whitaker says he was fortunate to have a teacher as a wife, and she helped develop Sammy Soil into a character who would resonate with children.  Before long, Sammy became a popular teaching tool in schools around the country.  Through school activity books, puppets, and costumes, Sammy helps school children learn about the many different aspects of soil conservation.  He has evolved from a dream into a national symbol for soil and water conservation.

Whitaker’s career path started out very differently when, after graduating from high school, he attempted to join the U.S. Navy.  Unfortunately, diphtheria as a child had left him with hearing loss which made him ineligible.  Instead, he moved to Memphis and began working in a warehouse.  But when the opportunity for a promotion came along, he realized that not having a college degree would always hold him back.

Whitaker enrolled at Tennessee Tech and, after graduating with a Bachelor of Science degree in agricultural science in 1956, joined the Natural Resources Conservation Service (NRCS) as a NRCS district conservationist where he worked mainly with farmers on conservation projects.  Whitaker grew up on a farm, spent time at his grandfather’s farms, and had always taken an interest in agriculture and conservation, so the NRCS was a natural fit for him.

Whitaker recalls his grandfather picking up a handful of soil and saying, “Boy, you take care of this here soil and it will take care of you!”  Whitaker uses the same lessons he learned from his grandfather to teach his five great-grandchildren about the importance of natural resource conservation.

While Sammy Soil may have seemed ahead of his time in 1968—prior to the conservation issues that are so prominent in the news today—Whitaker said one might be surprised at how often conservation was a topic of conversation in his profession.

“I worked with farmers for 40 years and never met a farmer who wasn’t interested in conservation,” he said.  “You learn in college, but you keep on learning when you get out.”

In 1992, while sharing Sammy with yet another school, a young girl asked Whitaker if Sammy had a sister, and Ruby Raindrop was born.  Her name was inspired by Ruby Falls in Chattanooga, where Whitaker was living at the time.  Whitaker says he felt it was important for young girls to have a female conservation character to relate to.  Bruce Plante, an award-winning, nationally syndicated cartoonist with the Chattanooga Times, volunteered to take Whitaker’s idea and design Ruby.

Today, Sammy Soil and Ruby Raindrop continue to make appearances in schools across the country with messages such as Ruby’s mantra, “Let’s get one thing clear:  me,” and Sammy’s mantra, “The soil you save today may keep you from hunger tomorrow.”

In 1989, Whitaker received the USDA Superior Service Award (the top award a USDA employee can receive); in 1991, he received the Tennessee Tech Agricultural Foundation’s Distinguished Alumnus Award; and in 1999, he received the Handicapped Employee of the Year Award by the Secretary of Agriculture.

Whitaker attributes much of his success to the Tennessee Tech education he received and influential professors like J. W. Huddleston and Clyde Hyder who recognized his severe hearing loss and encouraged him not to drop out of school because of it.

“If it wasn’t for Tech, I wouldn’t have met my wife and I would still be working in a warehouse somewhere,” said Whitaker.  “Even if you are an average student, you have a future ahead.”