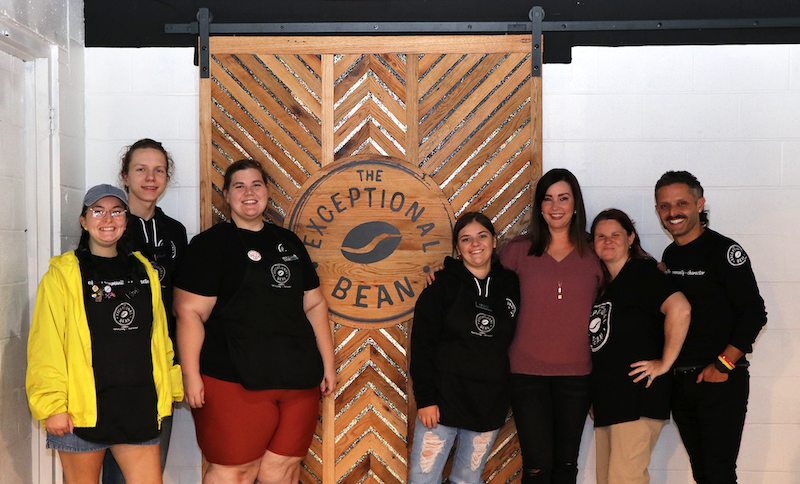 That’s the motto of Cookeville’s newest coffee shop, where two Tennessee Tech alumni are making Cookeville a more inclusive place for individuals with special needs. Last month, Michael and Cigi England opened The Exceptional Bean, a nonprofit that provides employment opportunities in a supportive environment for individuals with disabilities. The Englands say they hope to cultivate a community of inclusivity where all members have purpose and value.

Michael and Cigi say The Exceptional Bean might not exist if it weren’t for Tennessee Tech.

Cigi knew from an early age that she wanted to work in fashion. She chose Tech for its size and for a close-knit human ecology program where professors would know her name. She graduated from Tech in 2006 with a degree in human ecology and moved to Atlanta to work for AmericasMart, the largest home goods and apparel trade show in the country. But Cigi says something was missing – she didn’t have a sense of community. In 2014, she moved back to Cookeville and opened Cigi’s Boutique.

Michael admits his college journey was very different from his wife’s. He entered Tech as a history major but wasn’t committed to his education.

“I cannot stress this enough: I had no idea what I was doing,” Michael said. “I was going to school because that’s what everyone else was doing. It felt like my only option. If I’m being completely honest, I didn’t want to go to Tech. I wanted to go to UT with my friends. I thought Knoxville was cooler than Cookeville, and that’s where I wanted to be. But I came to Tennessee Tech and joined Kappa Sigma Fraternity. I made friends and connections but was floating around with no goal, no plan. My grades weren’t good. My attendance wasn’t good.”

“I remember one day Dr. Birdwell pulled me out into the hallway and said, ‘You’re one of the smartest students I have, but your attendance and performance are based on decisions you’re making,’” Michael said. “He was right, and that stuck with me. He didn’t have to do that – he had a lot of students – but he made me feel like I belonged at Tech.”

Michael ultimately decided to withdraw from Tech and move back home to Crossville. He worked in commission-only sales for a while and later at the same tire company as his dad. But, like his future wife, he knew something was missing. A few years later, Michael met Cigi and moved back to Cookeville.

“My perspective had changed, and my life had changed dramatically,” Michael said. “Leaving Tech and Cookeville the way I did – as a college dropout – always ate at me. It was something I wanted to correct, but I didn’t know how.”

Then Michael met Susan Wells, a lecturer in Tech’s Department of Decision Sciences and Management. She offered to help him re-enroll. Michael was concerned that his GPA would prevent him from being admitted and that it would take too many years to complete a degree, but Wells was undeterred.

“She said, ‘I’ve seen worse GPAs than yours – not many, but I’ve seen worse,’” Michael recalled. “’You can clean this up and do this in four years. You can be 39 years old with a degree or 39 years old without a degree. Who do you want to be?’ Susan Wells is an absolute asset to our university because she genuinely cares. And that ultimately is what Tech is all about.”

Michael was re-admitted to Tech’s College of Interdisciplinary Studies and says the faculty and staff created a schedule that accommodated his full-time job. In 2019, Michael graduated with his bachelor’s degree in interdisciplinary studies.

“Going back to get my degree, I realized how much I genuinely liked Tennessee Tech,” Michael said. “I was now looking at Tech through different eyes. I had this ‘aha’ moment. I was never a Volunteer. I was always a Golden Eagle. I just didn’t know it at the time.” 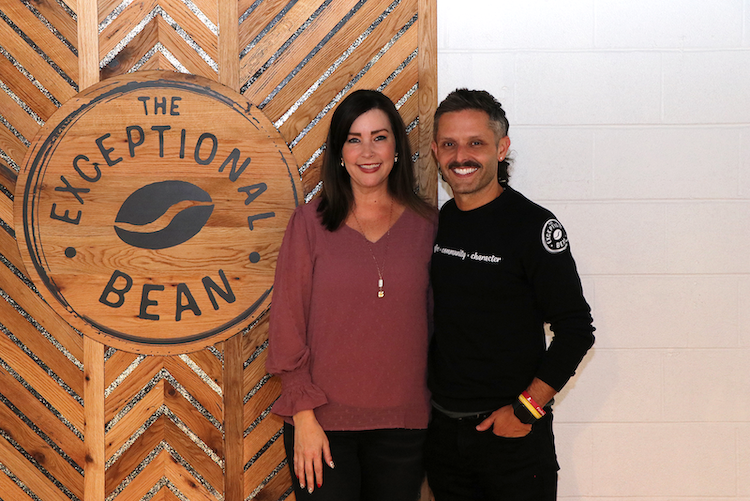 Michael and Cigi volunteer with several organizations that assist people with disabilities. Through Ainsley’s Angels, Michael met Bradley Styer. Bradley has multiple disabilities, including cerebral palsy, and has used a wheelchair for most of his life. Michael, a runner, pushes Bradley in races.

“When I started running with Bradley, and I would push him in the wheelchair, we’d get going down the hill and he’d say ‘Whoo!’ I realized he’s having more fun than any of us. I said to my trainer, ‘You know, we haven’t whoo’d a single time.’”

Michael and Cigi quickly discovered that their friends with disabilities couldn’t go everywhere they could go.

“Not everywhere has a ramp or accessible restroom,” Cigi said. “Bradley can’t go just anywhere he wants, because the world wasn’t built for Bradley.”

They also noticed that their friends with special needs had trouble finding jobs.

While watching television on a Sunday afternoon, the Englands saw a documentary on European coffee shops that serve as “the heartbeat of the community.” It’s where people get their news. It’s where they go to mourn or celebrate. It’s where everyone meets. They knew then what they wanted to create. While the Englands founded The Exceptional Bean, they are quick to correct people who say they are the owners.

“I am the founder, and Michael is the general manager,” Cigi said. “We answer to a board of directors. And one month in, we are killing it! Business is going great! I’m a doubter, but I never doubted this. There’s been no hesitation to come support it. And there’s no hesitation for me to brag about it because our community made this.”

Nearly every item inside The Exceptional Bean – whether it’s a table, espresso machine or piece of art –bears a plaque with the name of a sponsor. And several of Tech’s Greek organizations have volunteered to help out as well.

“People hear about this and want to be a part of it,” Michael said. “Everyone knows someone who has a disability.”

Michael and Cigi admit that opening The Exceptional Bean hasn’t been easy. Neither has a background in the restaurant business, coffee, nonprofits or special education. But Cigi says she uses her Tech education every day. She credits accounting classes with Richard Rand and economics classes for lessons in how to run a business.

“I also have to give credit to Melinda Swafford and my child and family studies classes,” Cigi said. “Dr. Swafford is a special needs mom, and she would always share real life-stories of the struggles and was very honest about it. She taught me how a special needs family interacts with the world.”

Michael says it’s been a long journey from an idea on a lazy Sunday to where they are today.

“There were so many times it would have been easy to give up,” Michael said. “But it goes back to my experience at Tech. I took everything for granted. I had a healthy body. I was at a wonderful university. But I had a chip on my shoulder. Being employed is something I’ve taken for granted my entire life. I can walk in almost anywhere and fill out an application and know that I have a shot. Bradley is more enthusiastic about working and life in general than anyone. People just need a chance. Once you get a chance, you can do anything.”

When Bradley received his first paycheck from The Exceptional Bean, he knew exactly how he wanted to spend part of it. He took Michael and Cigi to dinner.

“He thought it was the greatest thing because, for once, he could do something like that,” Cigi said.

Cigi says The Exceptional Bean has become more than just a place of employment. It’s a community.

“One day, I saw a few employees being dropped off outside, and I realized they weren’t on the schedule for that day,” Cigi said. “So, I ran outside and reminded them of the schedule. They said, ‘Oh, we know. We’re just here to hang out.’ We have employees who have their first apartments now because they have paying jobs. They are living independently for the first time. They are living their best lives.”

The Exceptional Bean is located at 55 N. Walnut Ave., the former home of One Hour Martinizing. Michael and Cigi say people come for the mission but stay for the coffee.

“I think originally, people came for the mission,” Michael said. “But I hope eventually people don’t even know what the mission is. They just come because we have really good coffee and amazing customer service.”

return to tech took us there main page