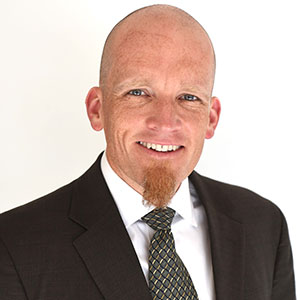 Tom Collins, `98 chemistry, says a person with his background is more likely to move to the moon than become a pediatric cardiologist at Stanford’s Lucile Packard Children’s Hospital. But that’s exactly what he did, and he credits Tennessee Tech for giving him the opportunity.

Collins grew up in Morgan County, one of the perennially lowest-income, least-educated counties in Tennessee. His father dropped out of high school, and his mother worked at a local prison.

“I don’t know that it ever occurred to me that guys like me, from where I’m from, aren’t supposed to do the things that I’ve done,” said Collins. “But here I am, a doctor on the faculty at Stanford.”

Now, Collins has chosen to give back to his alma mater. He and his wife Missy established the Future Leader in Healthcare Scholarship for students majoring in a healthcare field. Collins says he wants students considering Tech to know that they can do anything and go anywhere with a Tech education.

“My dad always said, ‘You’ve got to get an education,’” said Collins. “He didn’t want me doing manual labor like he did. He saw me doing something more.”

Collins knew his parents did not have the resources to pay for college, and he had no idea how he would afford it. But when Collins was named valedictorian of his class, he learned that Tech offered scholarships for high school valedictorians.

Collins enrolled at Tech as an engineering major; however, he struggled his first semester. He says he never really knew how to study and had the wrong idea about engineering.

Collins says he met with his faculty advisor who encouraged him to consider another major.

“My advisor said, ‘Maybe engineering isn’t for you,’” said Collins. “I got so mad because I took it as him saying, ‘You’re not very smart.’ I see now, that’s not what he was saying at all, and he was right about my major.”

Collins says several people suggested that he consider a career in medicine, so he changed his major to chemistry with a biochemistry concentration.

After graduating from Tech with a degree in chemistry, Collins attended the University of Tennessee College of Medicine and discovered a passion for cardiology.

“I realized in medical school that I could hear things in a heart that the other students couldn’t hear,” he explained. “I could hear a heart murmur. I had an aptitude for that, and the heart was simple to understand yet elegant to me. When I learned about congenital heart disease, I knew then and there that’s what I wanted to do.”

When the time came to learn which institution he would be matched with for his fellowship, advisors told Collins that he would match with a high-ranking institution; however, one of the faculty felt differently.

“He heard my accent – as much as I tried to cover it up – he heard it,” said Collins. “And he told me that I would never match with an Ivy League institution.”

But on match day, Collins learned that he had been matched with the Children’s Hospital of Philadelphia (CHOP) at the University of Pennsylvania (Penn). CHOP is the oldest children’s hospital in the country and one of the most highly-regarded programs in existence. Penn is also one of the eight private universities that make up the Ivy League.

After fellowship at CHOP, Collins moved to Arkansas Children’s Hospital and says he was building a great program there when the chief of congenital heart surgery at Stanford called and said, “I want you to come out here and build a center for these kids.”

Collins says he believes part of the reason his career path led him to the Stanford School of Medicine in Palo Alto, California, is so that he could learn to be proud of where he came from.

“I spent my whole life trying to hide my accent, trying to get away from where I was from,” he said. “And I will admit that there was a time when I was kind of embarrassed because everyone I was around was a product of a big-name place: Harvard, Yale, Columbia, Dartmouth, Princeton. And I had some juvenile feelings of inferiority when colleagues would ask me where I went to college. So, coming out here has been liberating in that sense. Now I say, ‘Yeah, that’s where I’m from. You’re darn right I went to Tennessee Tech.’ You want to talk about return on investment? Hands down, Tennessee Tech.”

Before Collins had the resources to make a major gift to establish a scholarship, he says it was important to give what he could to Tech. Collins is 17 years True To Tech. True To Tech recognizes donors who give to Tech every year, and the gift can be in any amount to any area on campus. Collins admits that some years, his gift wasn’t much.

“There was a time when being True To Tech was hard,” he said. “When I was in training in Philadelphia, we were living paycheck to paycheck. But it was important to give something.”

When the time was right to make a major gift to establish a scholarship endowment, Collins says he put a lot of thought into the scholarship’s name. Collins and his wife Missy – a dentist who graduated from Ole Miss – know the challenges of getting into medical school and dental school. They want the scholarship to show the selection committees at these schools that someone at Tech recognized the scholarship recipient as a future leader.

“It is specifically geared toward trying to give students a huge boost in reaching their goal of medical school or dental school or any health science training,” Collins explained. “And I want it to be geared toward someone with a disadvantaged background. Me – 28 years ago – that’s the student I’m trying to help.”

Collins says the main goal with his philanthropy is to give students an opportunity.

“There are a lot of kids out there who are hoping to do something great and don’t necessarily have the background for it,” he said. “But you can do anything if you attend Tech. My son wants to go to Tech. He’s in eighth grade, and that makes me so excited. I am so thankful to be part of that tradition, and I’d do it all over again every time. I’m here at Stanford, and that’s because of Tennessee Tech and the opportunity that the university has given me.”