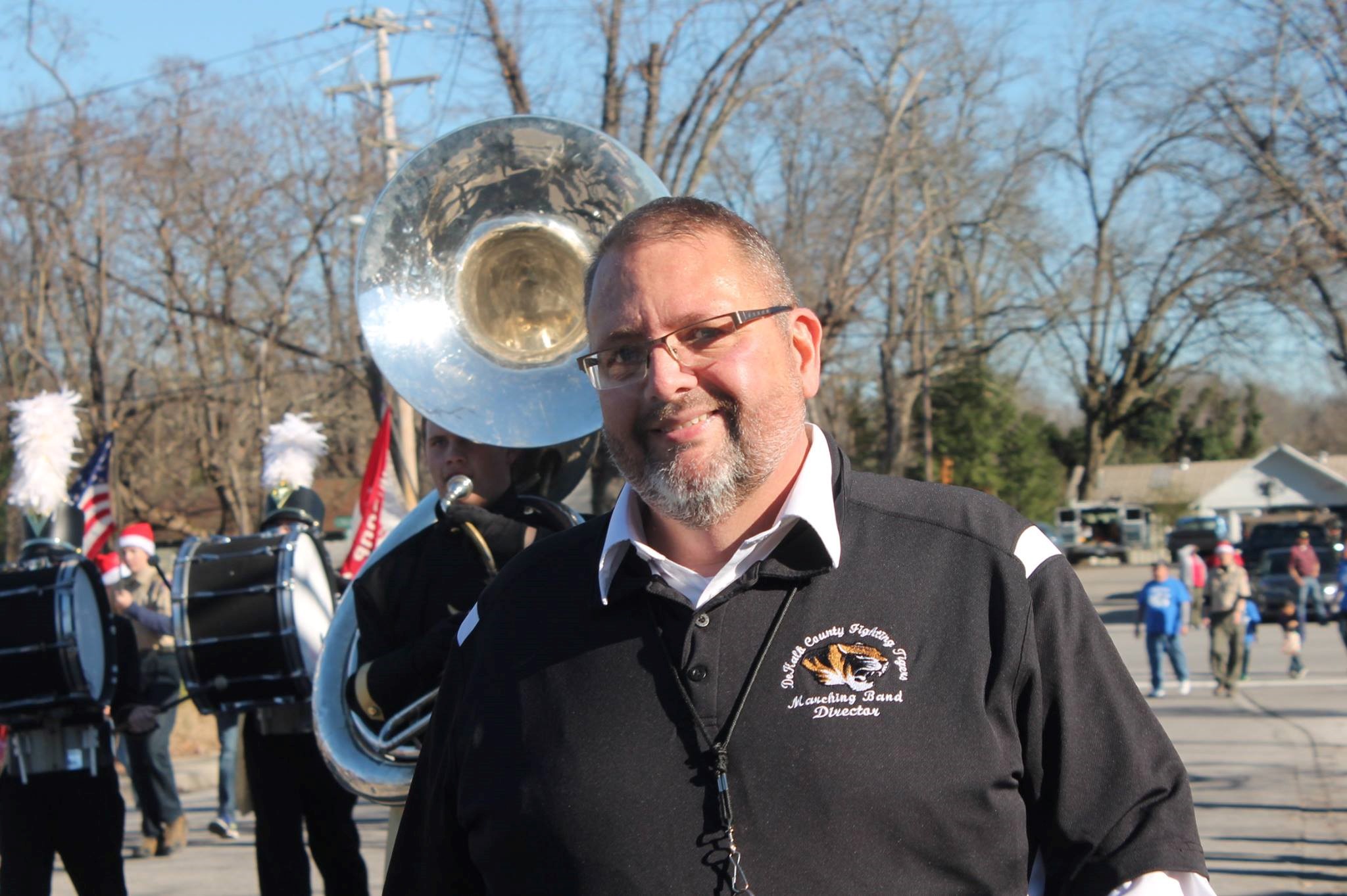 It took only one semester at Tennessee Tech to change Tracy M. Luna’s life.

Tracy enrolled at Tech in 1991, but he had to withdraw before completing his undergraduate degree. He would eventually earn a bachelor’s degree from a different institution and enjoy a successful career as a high school band director, but he never forgot about Tech. When Tracy passed away in December 2021, after a 17-month battle with pancreatic cancer, his wife Laura wanted to honor his life with a memorial scholarship. And she knew she wanted the scholarship to be for Tennessee Tech students.

“This is an opportunity to create a legacy at a place he loved and to allow his community to be a part of that,” said Laura.

Tracy grew up in Waynesboro, Tennessee. He started taking music classes as a freshman in high school and taught himself to play the tuba one summer. Tracy was the only member of his immediate family to attend college, and he was excited to join the world-famous Tennessee Tech Tuba Ensemble directed by R. Winston Morris.

Unfortunately, a medical condition forced Tracy to leave Tech prior to completing his degree, and he lost his hearing in one ear. Tracy feared he would never play the tuba again, but he was dedicated to finishing his degree. Tracy completed his bachelor’s degree in 1997 at the University of Tennessee at Martin, but he couldn’t stop thinking about Tennessee Tech.

After several years as a high school and middle school band director, Tracy wanted to finish what he started at Tech. He returned to Tech in 2008 to complete his master’s degree, and Winston Morris welcomed him back into the tuba ensemble.

“Winston was his biggest and most consistent encourager, even through the years when Tracy wasn’t at Tech,” said Laura. “Somehow, they kept in contact. Winston didn’t have to let him back into the ensemble, but he did.”

Laura says Tracy often wondered if he was good enough to earn an advanced degree in music, but Morris encouraged him to pursue it.

“Tracy trusted Winston to tell him the truth,” said Laura. “The confidence Winston gave him allowed Tracy to pursue his dream and come back to Tech. It brought full circle something that he had been searching for our entire marriage – and even prior to that. I didn’t realize how much it meant to him until we got to Cookeville.”

In 2010, Tracy graduated from Tech with a master’s in curriculum and instruction. He taught at Volunteer State Community College for a few years before accepting the position of band director for DeKalb County High School. He served as DCHS’s band director from 2015 until his passing in 2021.

Laura says Tracy’s favorite thing about being a band director was watching the growth and development of his students – both as people and as musicians. As a band director in rural areas of Tennessee, Tracy had a positive influence on hundreds of middle and high school students. He shared his passion for music – especially the tuba – with his family, friends, students and colleagues across the globe. Coming from a rural area himself, Tracy understood that students with limited opportunities could have their path dramatically altered by a single year or even a single semester of college, and that was the inspiration behind the scholarship Laura established in his name.

The Tracy M. Luna Memorial Music Scholarship will be awarded to incoming freshmen or transfer students majoring in music or music education.

Laura says her goal with the scholarship is to alleviate part of the first-year financial burden that might otherwise prevent promising music students from attending Tech, and the scholarship is related to a story she remembers well.

One of Tracy’s students had a rough home life, lived in poverty and struggled in school, but he could play any instrument Tracy put in front of him. The student found his place and purpose in band. Laura recalls that she and Tracy talked about ways they could help this young man.

“Tracy said, ‘You know, if I can get him a band scholarship to a university for just one semester, that will give him a chance,’” Laura recalled. “That will keep him out of jail for one more semester. It might give him a chance to be around different people – to see something different – and he might have a shot at getting out of his circumstances if he has just one opportunity.”

Tracy spoke to the director of a nearby university and helped the student enroll, receive a scholarship and join the university’s band.

“People always ask the Paul Harvey question,” said Laura. “What’s ‘the rest of the story’? Did he graduate from the university? And the answer is no, he did not. But it gave him a different opportunity. That student joined the military, plays in the military band and has a wife and children. That is what I call breaking family curses – breaking through all of that poverty and dysfunction. And maybe the scholarship didn’t do all of that, but it gave the student a chance at something different.”

Laura explains that Tech was a similar opportunity for Tracy. Tracy came from a small town with a lot of poverty, but Tech showed him a different vision of what was possible.

“That’s why our scholarship is not a four-year scholarship, and it’s not for a student with a perfect 36 on the ACT,” said Laura. “It’s for a student from a rural area who thinks music might be a pathway to explore.”

Colin Hill, director of Tech’s School of Music, says Tech is honored that the Luna family has chosen to establish a scholarship in Tracy’s memory.

“The Tracy M. Luna Scholarship will continue Mr. Luna’s tradition of helping students achieve their dreams, and it will create opportunities for students who might not otherwise have the necessary support,” said Hill.

The Tracy M. Luna Memorial Music Scholarship will be funded through gifts from friends, family and the community Tracy loved. While a portion of the funds has been received, additional funds are needed to permanently endow the scholarship. To make a gift to the scholarship, visit tntech.edu/giving or mail a check to Tennessee Tech, Box 1915, Cookeville, TN 38505, and indicate that you wish for your gift to support the Tracy M. Luna Memorial Music Scholarship.