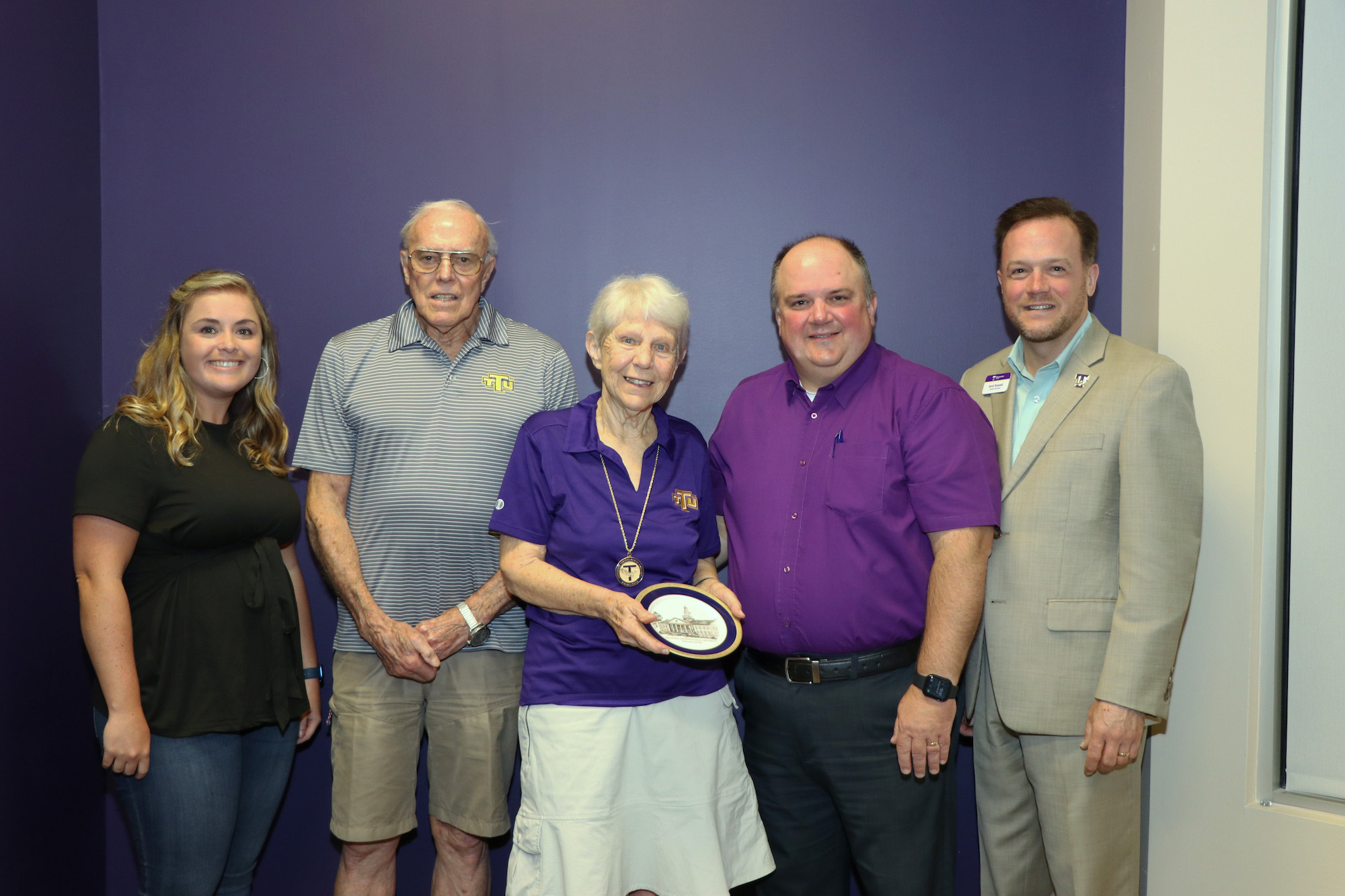 An interest in astronomy inspired Tennessee Tech alumni Gene and Jo Palmer to give back to a university that gave so much to them. They recently committed a significant planned gift for the College of Education, Athletics and Department of Physics, with the majority of the gift being designated for an astronomy program and observatory they believe will have long-lasting impact on the Upper Cumberland.

“I still recall the excitement I felt when, as a child, I first looked through a telescope at the night sky,” said Steve Robinson, chair of Tech’s physics department. “In retrospect, I now see that as an important factor in determining my future career path. On the few occasions when we are able to provide that experience for others, we see that same excitement and desire to know more about the universe. We are excited that the Palmers’ generous gift will allow us to establish a permanent astronomical observing facility in an accessible dark-sky location.”

The Palmers’ decision to include Tech in their estate plans actually started with a gift of a telescope. When their daughter and son-in-law, Pamela and Allan Norris of Perth, Australia, gave their parents a telescope a few years ago, Gene and Jo appreciated the gift but knew a place that would utilize it more: Tennessee Tech.

The physics department has long offered two introductory astronomy courses, and the department often assists with astronomy outreach events. In 2017, when the total solar eclipse passed directly over Tech’s campus, the department organized Tech’s eclipse celebration. An estimated 11,000 people were on campus for this historic event. The eclipse sparked an interest in delving deeper into observational astronomy, which resulted in a new course in astronomical techniques. The Department of Earth Sciences also set up a course in planetary geoscience. These two courses, along with the two introductory courses, now comprise a minor in astronomy.

Robinson says that in order for Tech to offer a robust astronomy program, the campus needs an observatory to offer regular, high-quality experiences for the Tech community, K-12 students across the Upper Cumberland and the general public. The observatory will be located at Oakley Farm.

“Once the facility is fully-developed, it will be capable of astronomical research, allowing us to expand the department’s course offerings and providing a new avenue for training students in research techniques,” Robinson said. “In short, this facility will allow us to fulfill our vision of introducing more people to astronomy and encouraging more students to consider STEM-based careers.”

The Palmers say Robinson’s appreciation for the gift of their telescope and his vision for an astronomy program combined with their love for Tech are what inspired the estate gift.

Gene came to Tech in the 1950s to run track for Coach Bill Dupes. As a student-athlete, Gene was the most dominant middle-distance runner in the Ohio Valley Conference during his four seasons on the Golden Eagle cross country and track teams, setting Tech and conference records. He was a four-time OVC individual champion and twice captured conference titles as a member of a Golden Eagle relay team. In 2010, he was inducted into the Tennessee Tech Sports Hall of Fame.

Gene and Jo met as sophomores while working on the queen’s float for homecoming, and Gene later proposed to Jo in Tech’s library. Gene graduated in 1960 with a bachelor’s degree in pre-medicine biology and a minor in chemistry, and Jo graduated in 1960 with a bachelor’s degree in secondary education and a minor in biology. After becoming engaged during the spring quarter of their senior year, they were married that September in Quantico, Virginia, where Gene was serving as an officer in the Marine Corps.

Following military service, Gene went on to earn his Ph.D. at Vanderbilt and enjoyed a successful career in neuropharmacology. He says working in Tech’s pathology lab under biology professor William Downs was one of the most memorable experiences of his undergraduate education.

“Dr. Downs was a big influence on me,” Gene said. “He prepared me to go to medical graduate school, work in neuroscience and pharmacology and study how drugs affect the brain.”

While at Tech, Jo discovered that, like her husband, she too developed an interest in science. She found a career passion working as a lab technician in the biochemical field.

The Palmers say they appreciated the knowledgeable professors, beautiful quad, friendly campus and experience of living in the dorms.

“It was a wonderful, friendly, fantastic atmosphere,” Jo said. “I loved all of it.”

The Palmers credit living a simple life with having the means to enjoy adventure travel and give back to Tech in a significant way. And their appreciation for astronomy plays a big part in their travels. They say wherever they are in the world, if there’s a nighttime astronomy event, they make a point to attend. They hope that, through their planned gift, residents of the Upper Cumberland will have the opportunity to participate in astronomy events as well.

“Gene and I wish for the entire Upper Cumberland to enjoy the observatory,” Jo said. “Oakley Farm is a wonderful landscape for everyone to experience the stars.”