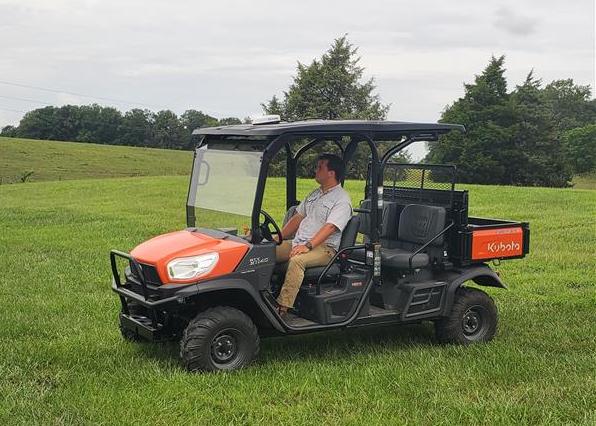 Joyce Glasscock Reece says her family’s history with the Upper Cumberland area dates back several hundred years. When she and her son, Edward, decided to sell their Cookeville home and use the proceeds to help others, Tennessee Tech was the first place that came to mind.

“We hope this gift supports the community and Tech’s School of Agriculture because we think this is a place that can grow to accommodate the excellence that has already been established here,” said Edward. “Tech can continue to produce agriculture leaders of the future.”

Joyce enjoyed a successful career as a real estate broker and spent the majority of her later years in Ohio. Edward is professor and chief of the division of adult plastic surgery at Baylor College of Medicine in Houston, Texas. Neither Joyce nor Edward attended Tech, but they still consider this area home and wanted to give back to a university that gives so much to the people of the Upper Cumberland. Because of their family’s background and strong belief in farming, they chose to designate their gift to Tech’s College of Agriculture and Human Ecology.

Joyce and Edward say they believe strongly in the value of an education and know scholarships can make a difference for students who otherwise might not be able to afford a college degree.

“In life, we’re all going to hit roadblocks, but you have to have the drive to keep going,” said Joyce. “We hope the scholarships we established can do that.”

The John Martin Reece Endowed Scholarship is named for Joyce’s father and is awarded to students majoring in agriculture at Tech.

“Dad was a very self-sacrificing man who believed in education,” she said. “His heart was in farming, and he loved growing things. So, we thought it was appropriate for him to be the namesake of this award. He would be very proud.”

The Nova Glasscock Endowed Scholarship is named for Joyce’s grandmother and is also awarded to agriculture majors.

“Nova was the cornerstone of our family,” said Joyce. “She had eight children and kept everyone together. She had such a magnetic personality and was focused on caring for our family and the people of this area. She was a dynamic woman, too – multitalented. She was all things to all of us. She was a generous person with her time and with her material blessings. We couldn’t think of anything more fitting than naming this scholarship for her.”

Edward added, “Because we are from here and we have a stake in the land here, we want the recipients of these scholarships to not only understand the history of this area but also to know how important farming was to the people who settled here.”

The Reeces also established the College of Agriculture and Human Ecology Endowment which is to be used at the discretion of the dean.

“We are surrounded by distressed counties, and many of our students struggle to pay for school,” said Darron Smith, dean of the College of Agriculture and Human Ecology. “These endowments will be life-changing for our students. The beauty of an endowment is that it will support students every year for the foreseeable future.”

Smith says the CAHE Endowment established by the Reeces will allow the college to purchase equipment and support student and faculty research.

“This gift will provide seed money that the faculty of the college can request to start a research project in hopes of pursuing external funding,” he explained. “This is a significant benefit to researchers attempting to procure outside funding.”

The CAHE has already used a portion of the funds to purchase a side-by-side four-person off-road work vehicle equipped with GPS technology for geomapping and grid soil sampling. The vehicle is crucial to the agriculture engineering and technology degree program where students learn about surveying and utilizing drones for crop management. Smith says that because the side-by-side is outfitted with geotracking and autosteer, it allows students to use satellites to lay out field grids and set boundaries of crop land. The side-by-side can be programmed to drive and stop wherever a satellite tells it to go.  Smith says small farmers are adopting this technology that, at one time, was only seen in large operations.

Edward says that in a world that is so fast-paced, it is important to look back to the past and focus on the land.

“We hope to be a part of training future farmers and agriculture majors who will stay in this area and bring modern techniques into an ancient craft to support our region here in Middle Tennessee,” said Edward. “Taking care of our communities and ourselves and each other is something that has to be recaptured. We chose to give to Tech because this institution is so important to this area. We love it, and the people here love it as well.”