Meet our current students and read about their research below. 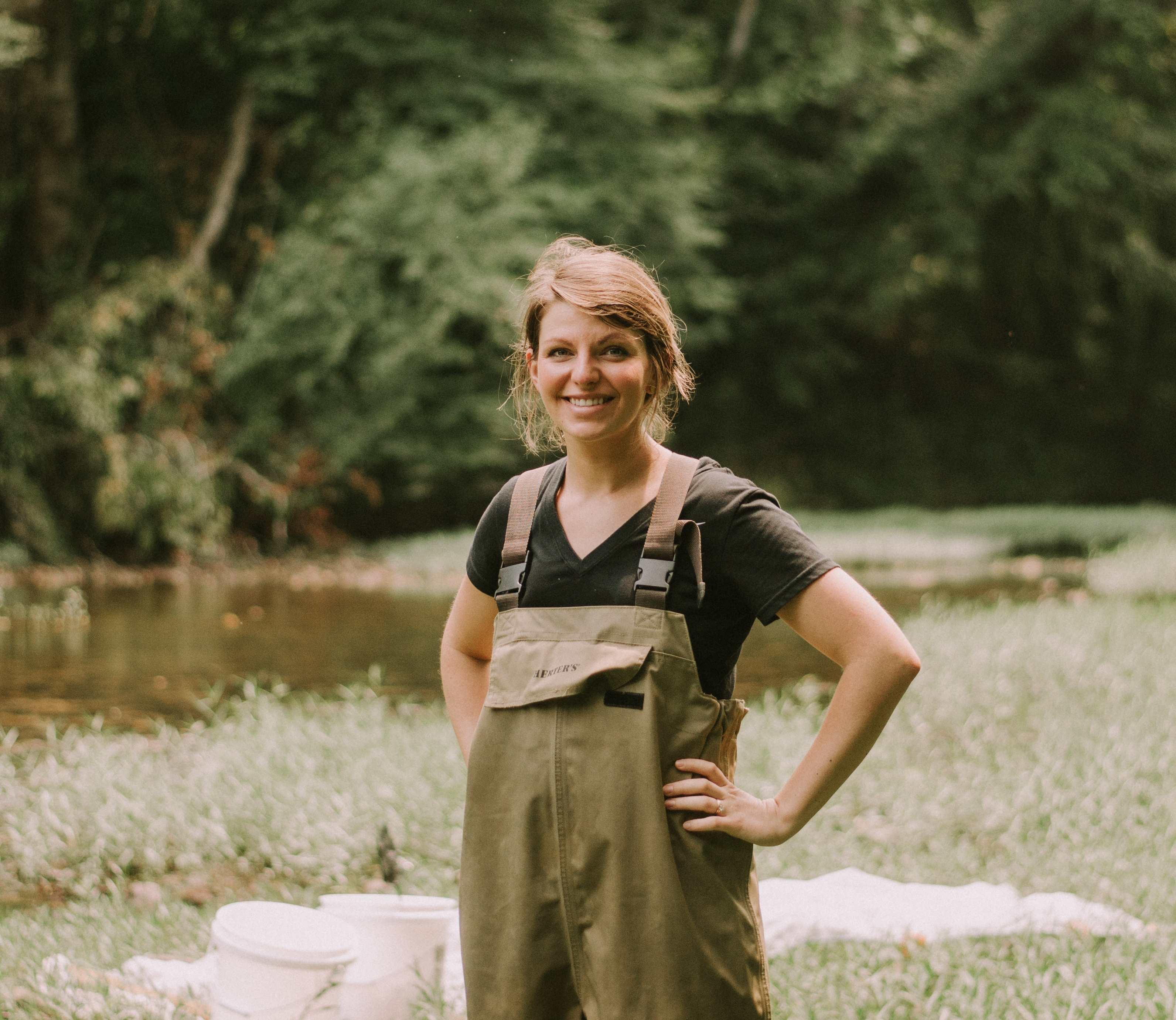 Sam's research proposal is titled “Integrated Analysis of Hydrology, Anthropogenic Threats and Species Distributions within Stream Ecosystems of a Major Military Base” . It focuses on using GIS and statistical modeling to analyze the aquatic resources at Arnold Air Force Base. She hopes to explore the potential to use GIS techniques in innovative ways to study Karst ecosystems as well as stream habitats and species. 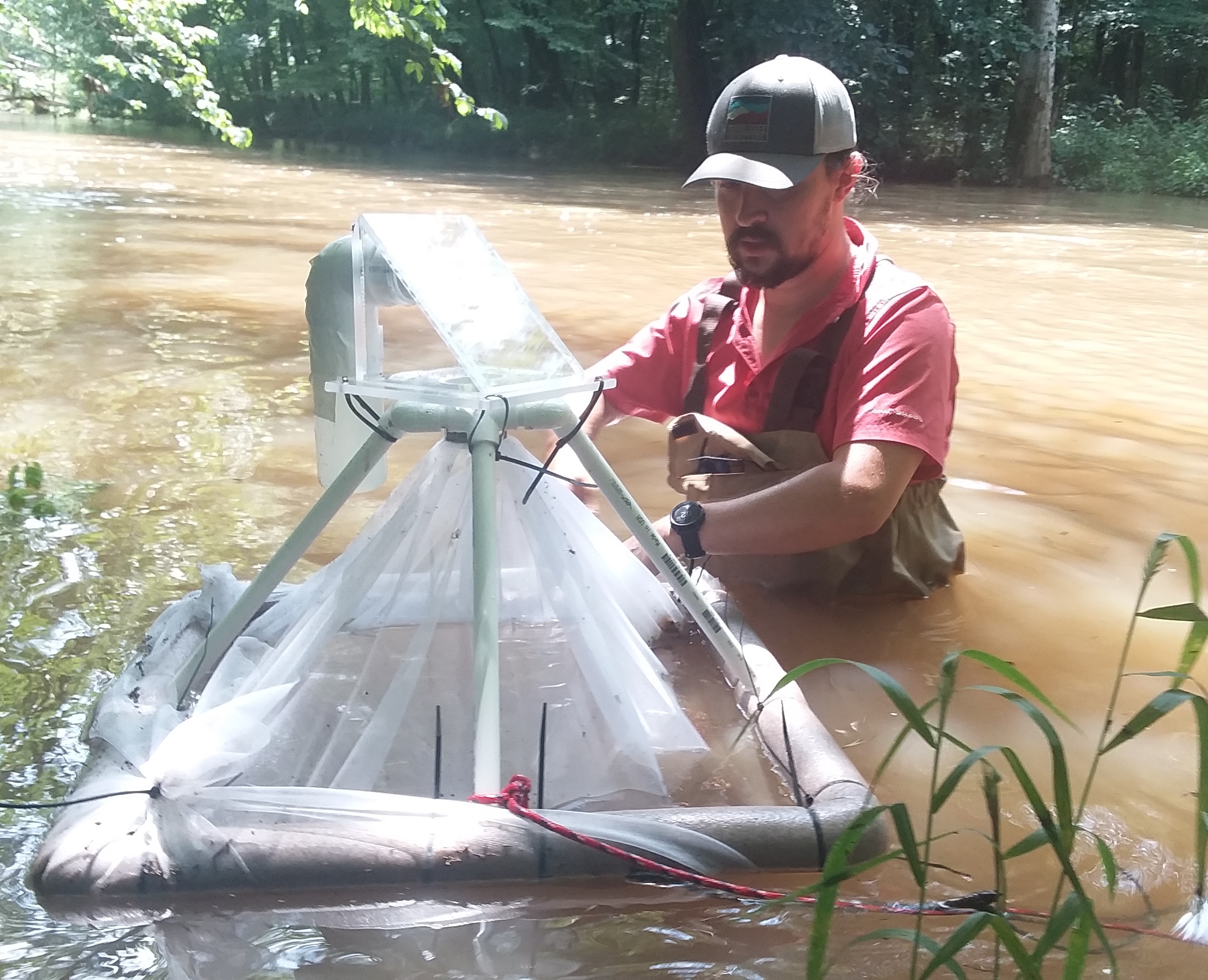 Peter's research is titled: "Transfer of PCBs from Emergent Insects to Terrestrial Consumers in Historically Contaminated Streams and Reservoir". His dissertation focuses on how stream insects that develop in polychlorinated biphenyls (PCBs) contaminated sediments can transfer PCBs to terrestrial consumers when they emerge as winged adults. Gray bats (Myotis grisescens) utilize emergent aquatic insects in their diet, which provides a route for PCB exposure and a potential concern for their conservation. Because PCBs are resistant to decomposition, historical contamination of PCBs at Wood’s Reservoir and several streams near Arnold Air Force Base may be sources of PCB exposure to local gray bat colonies. His research investigates how much insect biomass is emerging from these streams and reservoirs sites as a potential food source for bats, the PCB flux from these emergent aquatic insects, and how nutrient stoichiometry (the ratios of major nutrients in insects) affects PCB biomagnification. 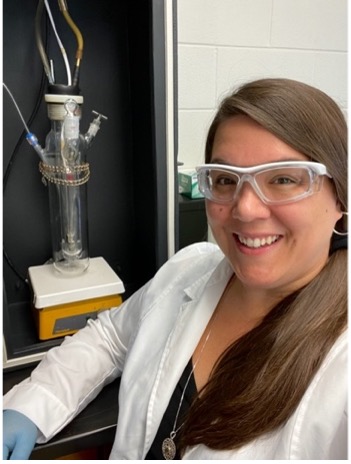 Sabrina's research is titled, "Experimental and Modeling Approaches for Using Platinum-Doped Thin Film Photocatalysis for Simultaneous Contaminant Degradation and Hydrogen Production in Wastewater Treatment Systems." As the amount of human and industrial waste in the environment increases, the need for more effective and efficient water treatment methods is higher than ever.  Current wastewater treatment processes have been found to be ineffective against a growing number of contaminants, including pharmaceutical compounds.  Sabrina’s work focuses on the need for a safe and environmentally-friendly method of removing pharmaceutical compounds from surface and drinking water sources, and will address this issue from two perspectives: 1) The photocatalytic degradation of acetaminophen via UV-C radiation and a titanium dioxide photocatalyst, and 2) The development of a mathematical model to provide essential information regarding reactor volume, the amount of photocatalyst (titanium dioxide) needed for degradation, and the time it would take to achieve complete contaminant degradation. 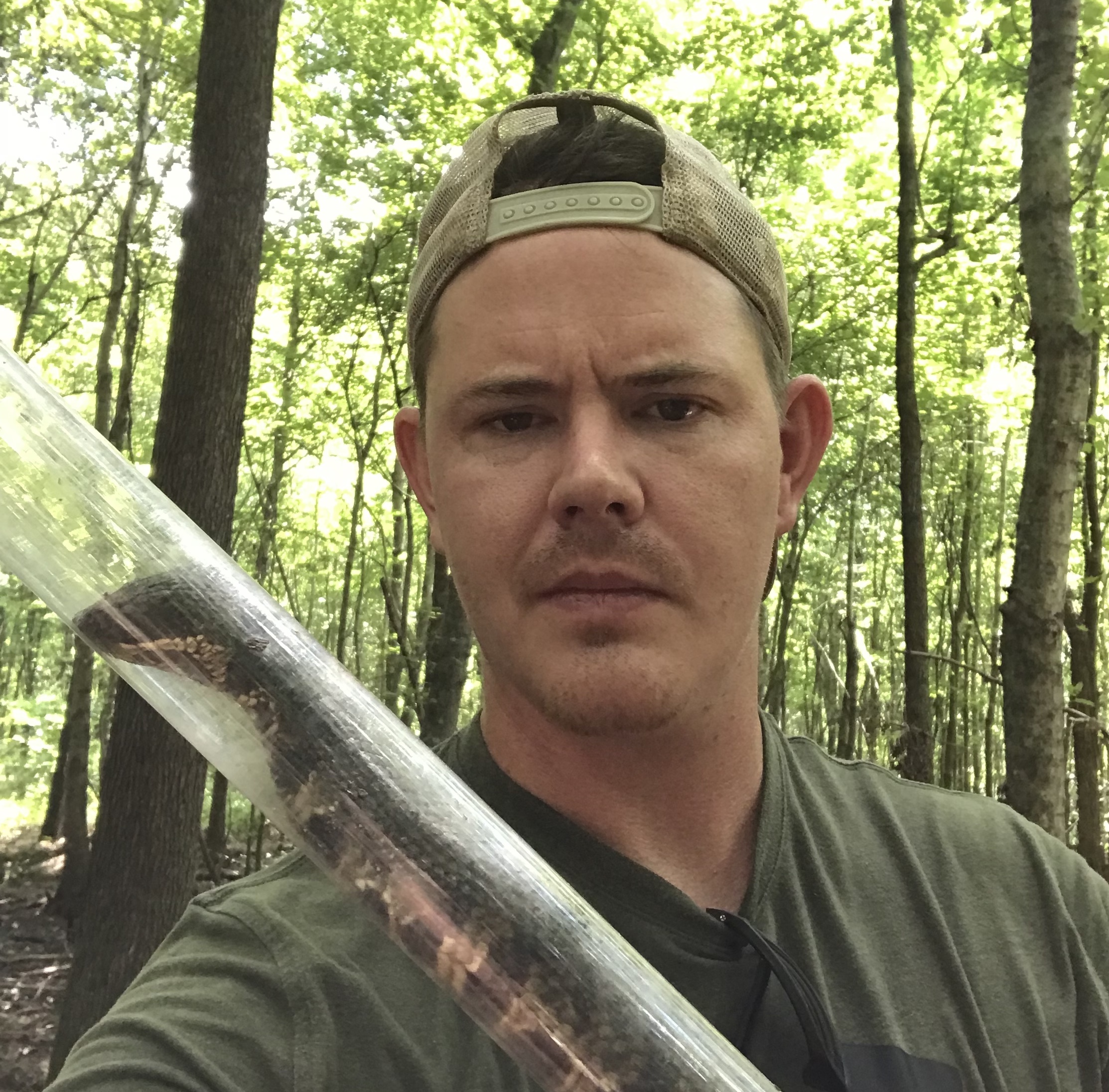 Cody's research is called, "Impacts of Snake Fungal Disease in Tennessee, Variation in Snake Immunology, Physiology and Demographic Structure." . Cody studies Snake Fungal Disease (SFD), a mycosis effecting numerous North American snakes, including snakes in Tennessee. His dissertation focuses on the immunological, physiological, and population effects the novel fungal pathogen, Ophidiomyces ophiodiicola, has on snakes in Tennessee. In addition to studying SFD, he also collaborates with a team of researchers in the outback of Australia studying the nesting and spatial ecology of the perentie (Varanus giganteus). His primary interests are herpetology, natural history, reptile and amphibian pathogens and immunology, physiology, reproductive ecology, and conservation. 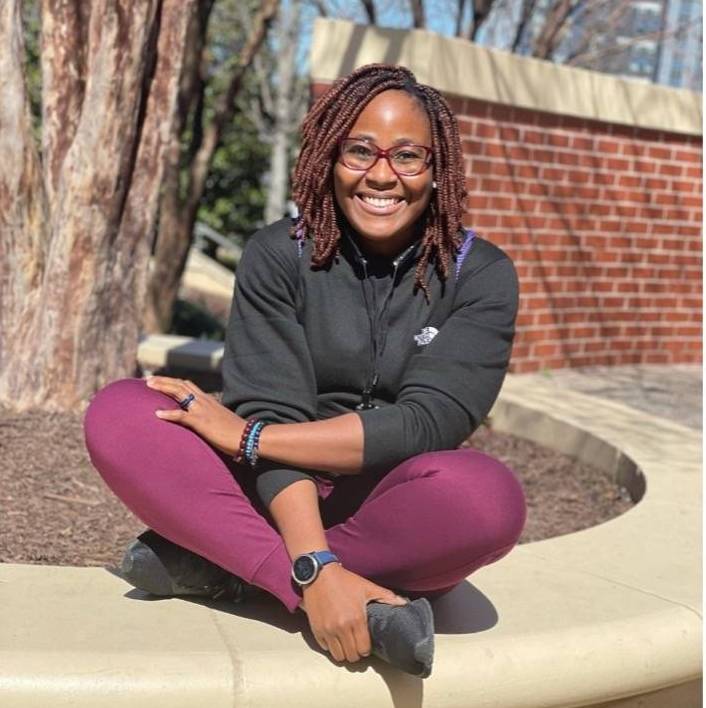 Chioma is from Imo State (South -East Nigeria) and she has lived most of her life in Lagos, South-Western Nigeria. Her doctoral research aims to better understand how and/or if the wastewater treatment plant contributes to the occurrence of microplastics in the environment, and the role of microplastics as possible vectors for pollution (focus on psychostimulants) in the environment. This portion of the research entails investigating the adsorption of selected psychostimulants onto microplastic pellets and determining the concentration via LC-MS. 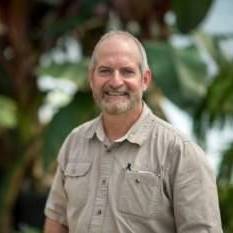 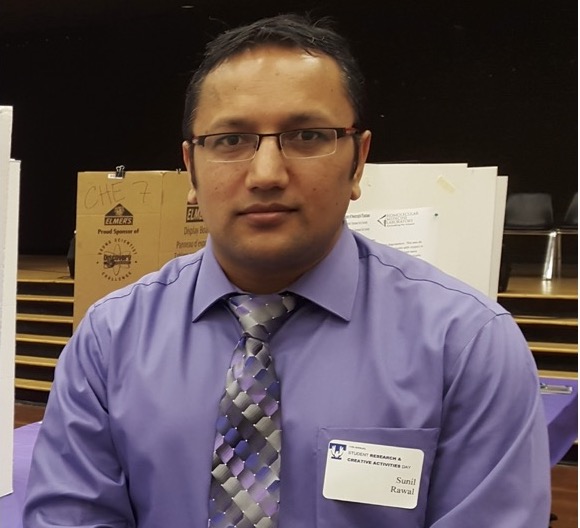 Sunil's dissertation is titled, "Advanced Oxidation of Acetaminophen for Wastewater Treatment: Testing A New Approach for Degradation by Photocatalytic Methods via TiO2 Films." Abstract: Traditional Waste Water Treatment Plants (WWTP) have not been designed to handle pharmaceutical-based contaminants and, therefore, cannot completely eliminate drugs residues. As a result, pharmaceutical metabolites can be found in ground water, surface water and even in drinking water in low concentrations. The application of titanium dioxide (TiO2) photocatalysis, for water purification, is a widespread technique due to it is chemically inert, cost-effective, non-toxic, and environmentally friendly. In this contribution, transparent, anatase-form TiO2 thin films were prepared via the sol-gel method and deposited onto glass microscope slides, using a novel spraying technique, with coatings ranging from one to ten. Furthermore, characterization of the coated TiO2 thin film slides was performed by using scanning electron microscopy (SEM) and x-ray diffraction (XRD). The slides were used to determine the photocatalytic degradation rate of acetaminophen with different pH ranges (acidic, basic and neutral), different contaminant concentrations, and different slides conditions. The most favorable photocatalytic degradation outcome Acetaminophen of ~ 44% was accomplished by using six glass slides with ten coating layers of TiO2 in a neutral medium. It was observed that over a period of 90- minute intervals the increase in number of thin film slides displayed a considerable increase in the degradation rate due to the increase in surface area, that helps to form more active sites. The global reaction rate constants for both four and six thin film glass slides increase with the increases in the coating layers. Further, a successful comparison was conducted to test the degradation of acetaminophen with different advanced oxidation processes to degrade acetaminophen, including the following: UV, UV/H2O2, and UV/H2O2/TiO2. 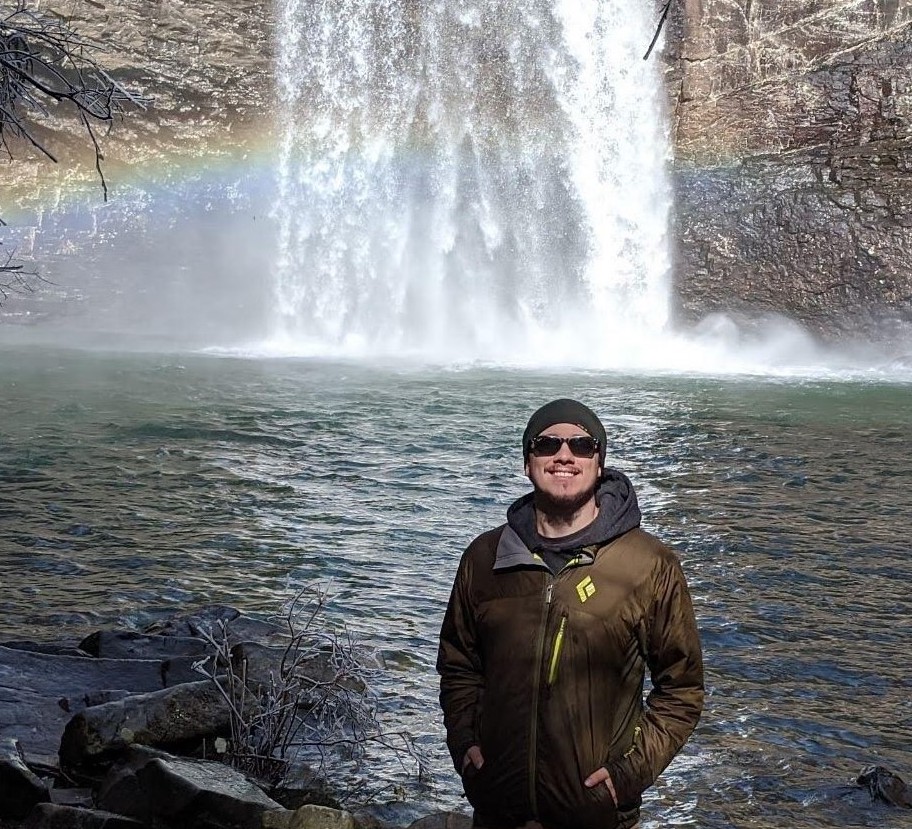 Chris's research is titled, "Metabarcoding environmental DNA to examine pollinator communities across the range of Physaria globosa (Brassicaceae).” and is part of the recovery and conservation efforts for a federally endangered mustard species called Short’s bladderpod (Physaria globosa(Desv.) O'Kane and Al-Shehbaz). The primary goal of Chirs's research is to investigate and monitor pollinator communities across the range of Short’s bladderpod via metabarcoding environmental DNA (eDNA) on flowers. As insects visit flowers they can leave behind small fragments of DNA in saliva or shed hairs that can be extracted from the flowers and identified to species or taxonomic group. This method allows us to identify and monitor the pollinator community composition across the range of Short’s bladderpod more efficiently compared to traditional sampling techniques.