“A History of Desegregation at Tennessee Tech University”

This exhibit interprets the context and early decades of Black students and employees at Tech, and connects their efforts with the activism of Black students today. It is located on the main floor of Volpe Library. The exhibit includes a display of library books that cover themes in the exhibit. These books are available to be checked out or read in the library. Accessible PDFs of the exhibit panels are available online. 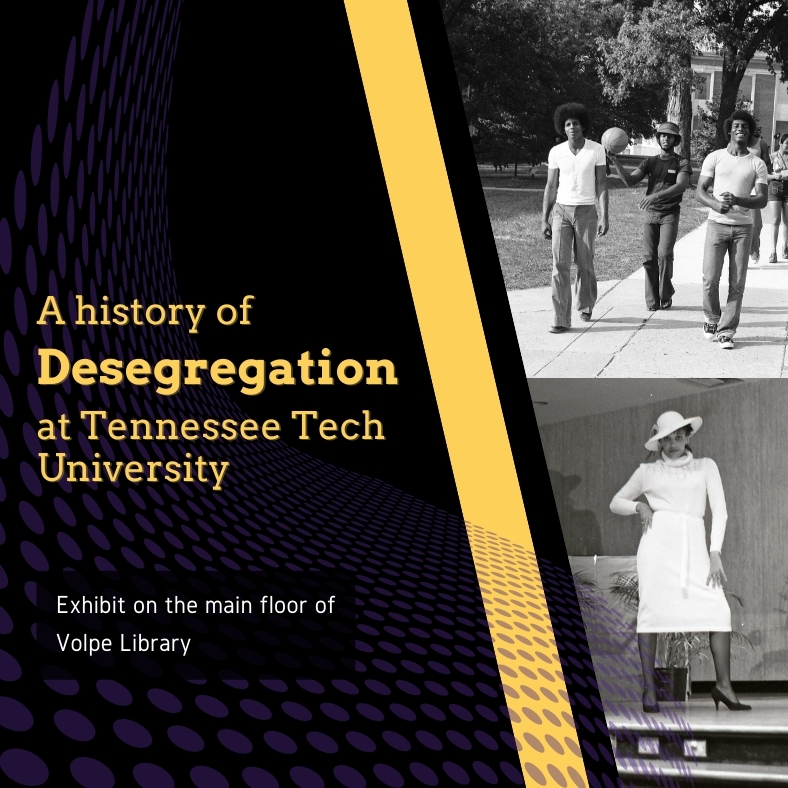 "Around the World in 40 Stamps" 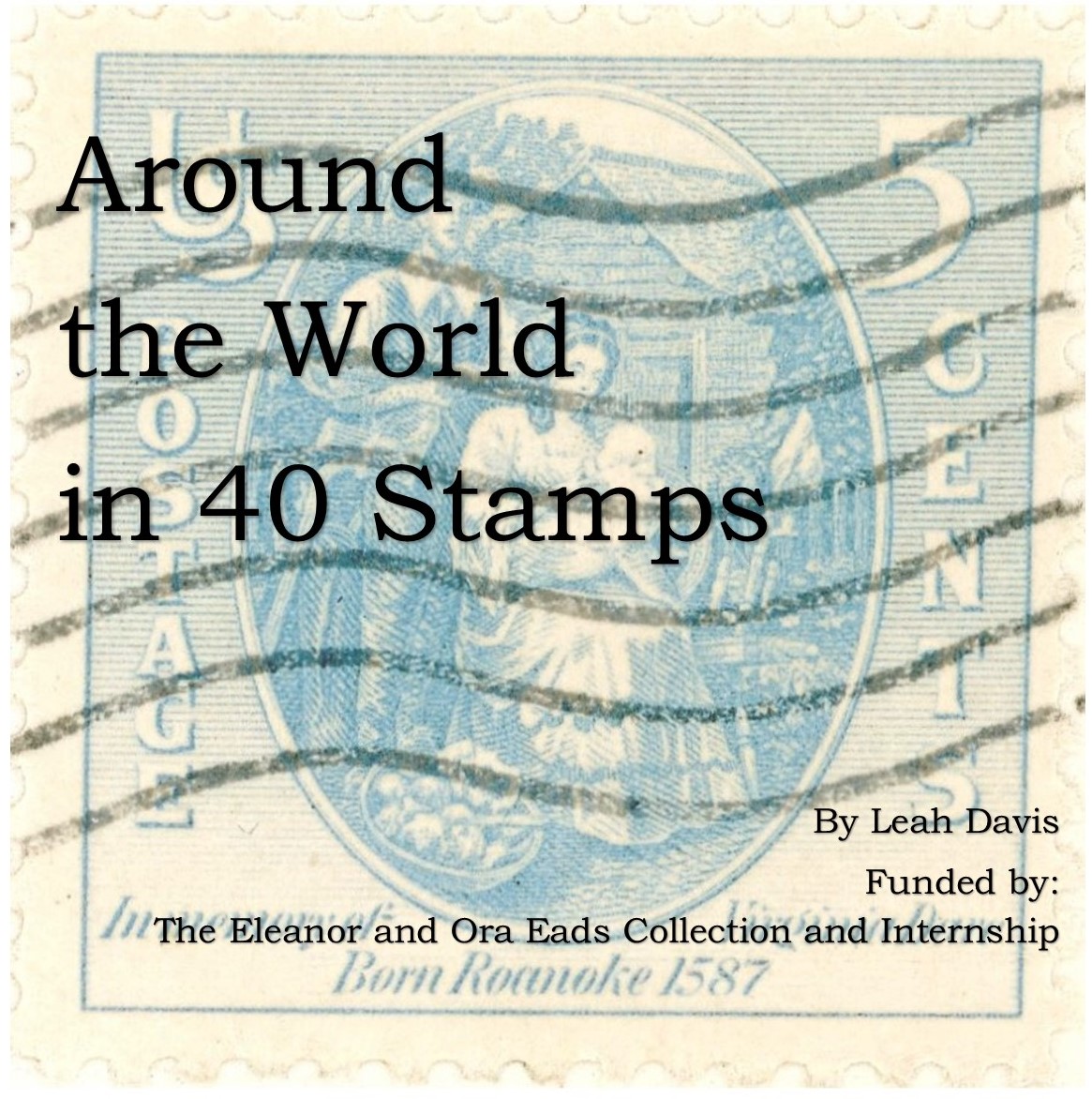 “Imagine Going Half A Day and Not Seeing Anybody that Looks Like You”: A History of Black Students and Employees at Tennessee Tech

The exhibit surveys Black students and employees at Tennessee Tech University from its founding through the present day. Tennessee Tech University was founded as a racially segregated, public institution in 1915. By the 1920s, African Americans worked at the college, but the administration relegated them to low-paying employment in the cafeteria. The college was the last higher education institution in the Tennessee Board of Regents system to desegregate. Leona Lusk Officer’s enrollment in 1964 opened the door for Black students at Tennessee Tech. The exhibit provides snapshots of some of the earliest Black employees and students at the university. It traces the founding and activism of historically Black student organizations on campus. The exhibit contextualizes changes in the campus climate in statewide and national events. It features over 175 photographs, oral histories, clippings, flyers, and other documents. The exhibit can be viewed at: https://tntecharchives.omeka.net/exhibits/show/blackhistory 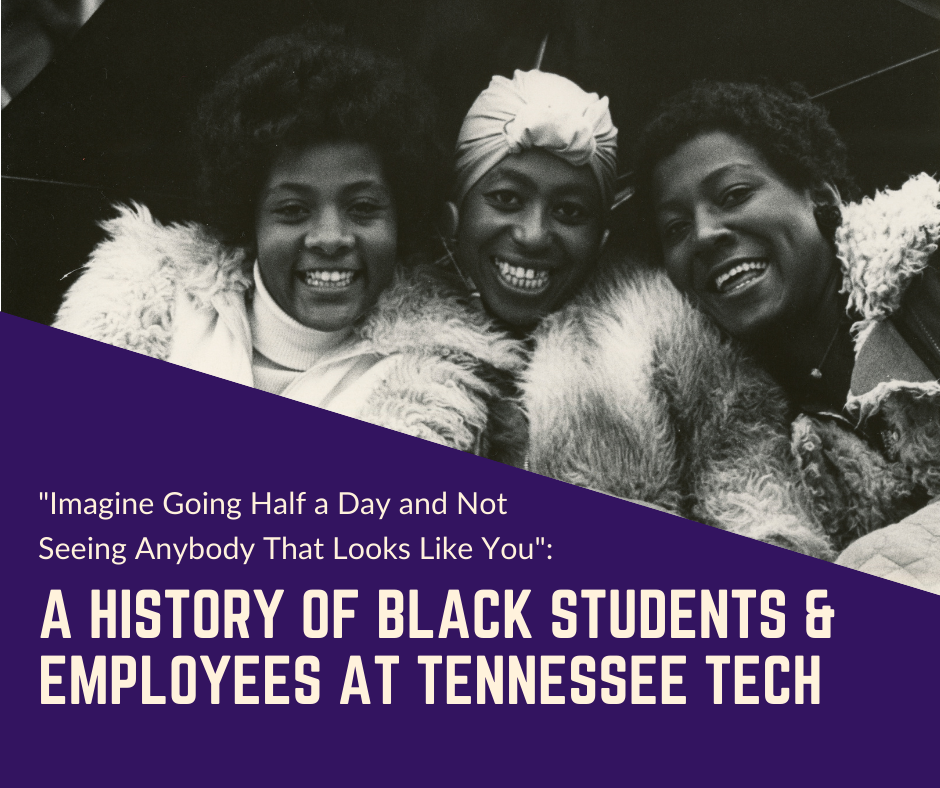 "What Affects One Group Affects All of Us":  Black Student Activism at Tennessee Tech

This exhibit highlights the range of Black student activism from 1968 to 2020. Students have pushed for the university and the broader community to respect the humanity, needs, and culture of Black students and people. The exhibit displays photographs of events and clippings from publications written by Black students. The exhibit is located in the Office of Multicultural Affairs display case on the top floor of the Roaden University Center. For those who cannot attend in person or who have low-vision, the posters for the exhibit and a hyperlinked list of the items on display are available online. 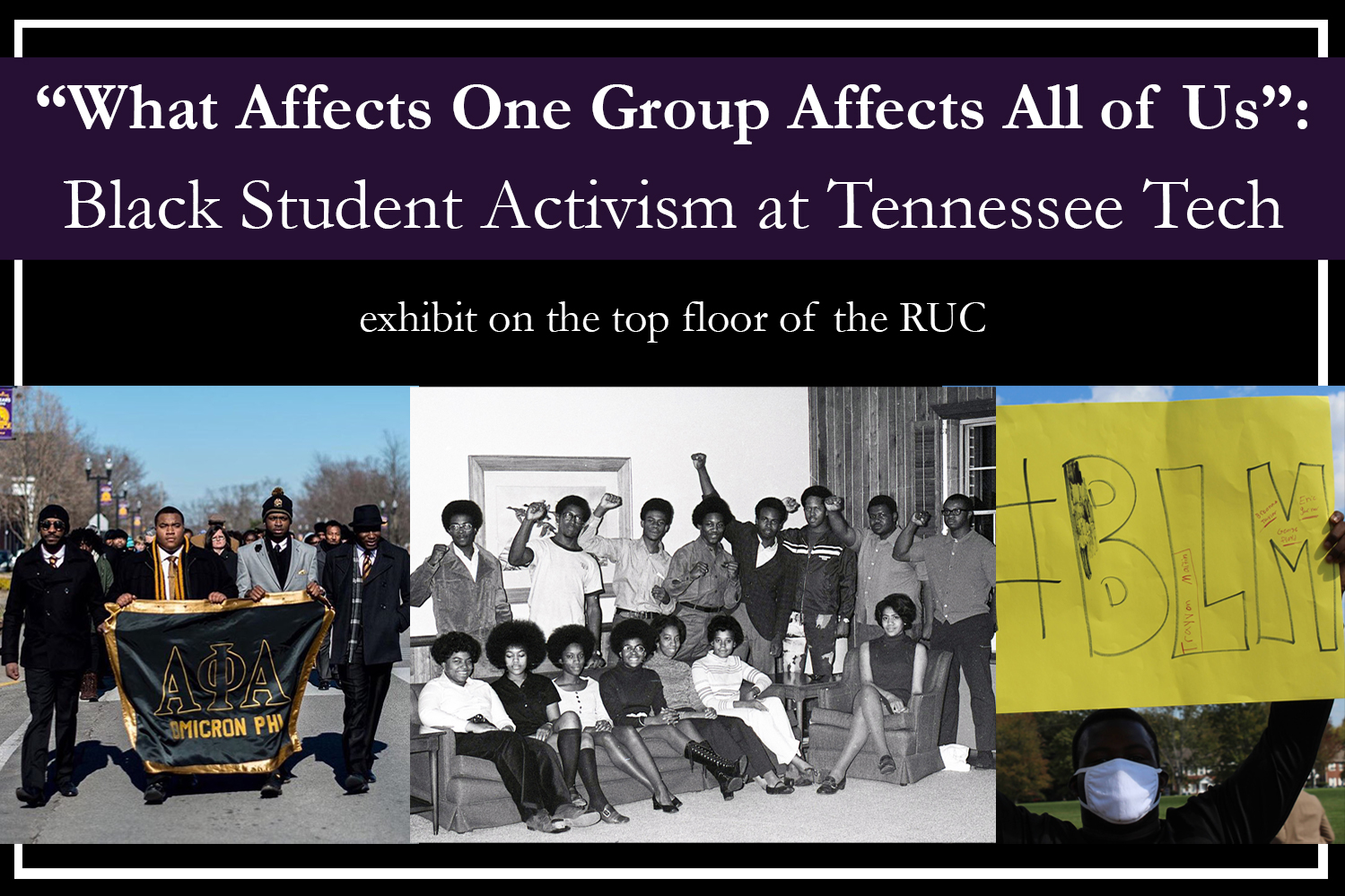 This exhibit traces the philosophy of Black cultural centers to the Black student movement of the 1960s and 1970s in the United States. It outlines the climate in which Tech Black students decided to push for the founding of their own center in the late 1980s. Exhibit pages describe the continuity and changes in the Center overtime, spotlight the staff and leaders of the Center, and provide a detailed biography of the Center’s namesake, Leona Lusk Officer, the first African American student and graduate of Tennessee Tech University. The exhibit includes over 60 items, ranging from photographs, webpages, scrapbook pages, news releases, flyers, and other documents. The exhibit can be viewed here: https://tntecharchives.omeka.net/exhibits/show/bcch 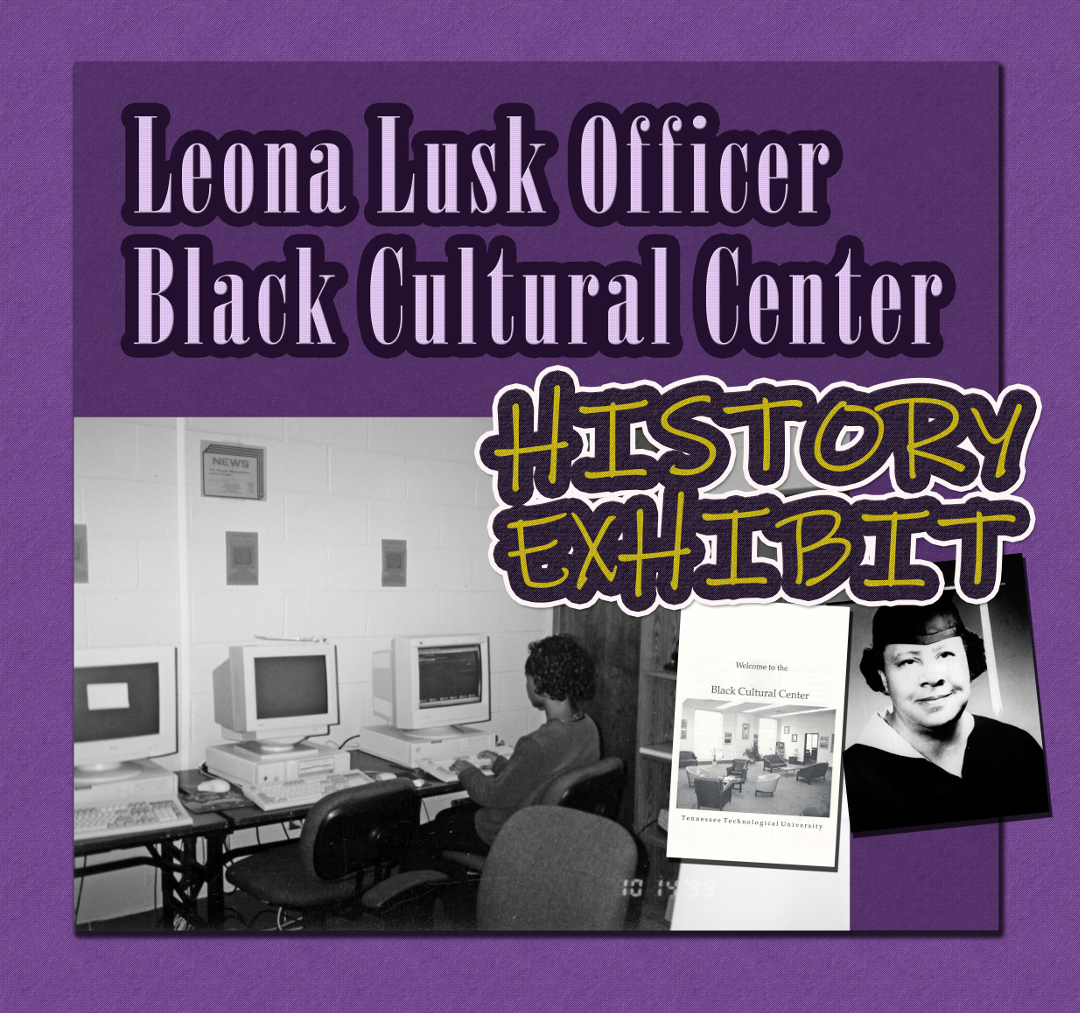 The Leona Lusk Officer Black Cultural Center is celebrating its 30th anniversary in 2020! Tennessee Tech University students, faculty, and staff founded the Black Cultural Center in 1989 to provide black students a space to socialize, be supported, and learn about African-American and African culture. The center formally opened in August 1990. The Archives has curated a digital exhibit on events held by the Center from 1990 to 2019. It features over 55 photographs, flyers, programs, invitations, clippings, and other documents that show the range of the center’s programs. Topics include programs that supported Tennessee Tech students, educational events on the culture and history of people of color, prominent African-Americans who spoke on campus, and alumni events. The exhibit is best viewed on devices with large screens, such as laptops and desktop computers. The exhibit can be viewed here: https://tntecharchives.omeka.net/exhibits/show/bcce/intro 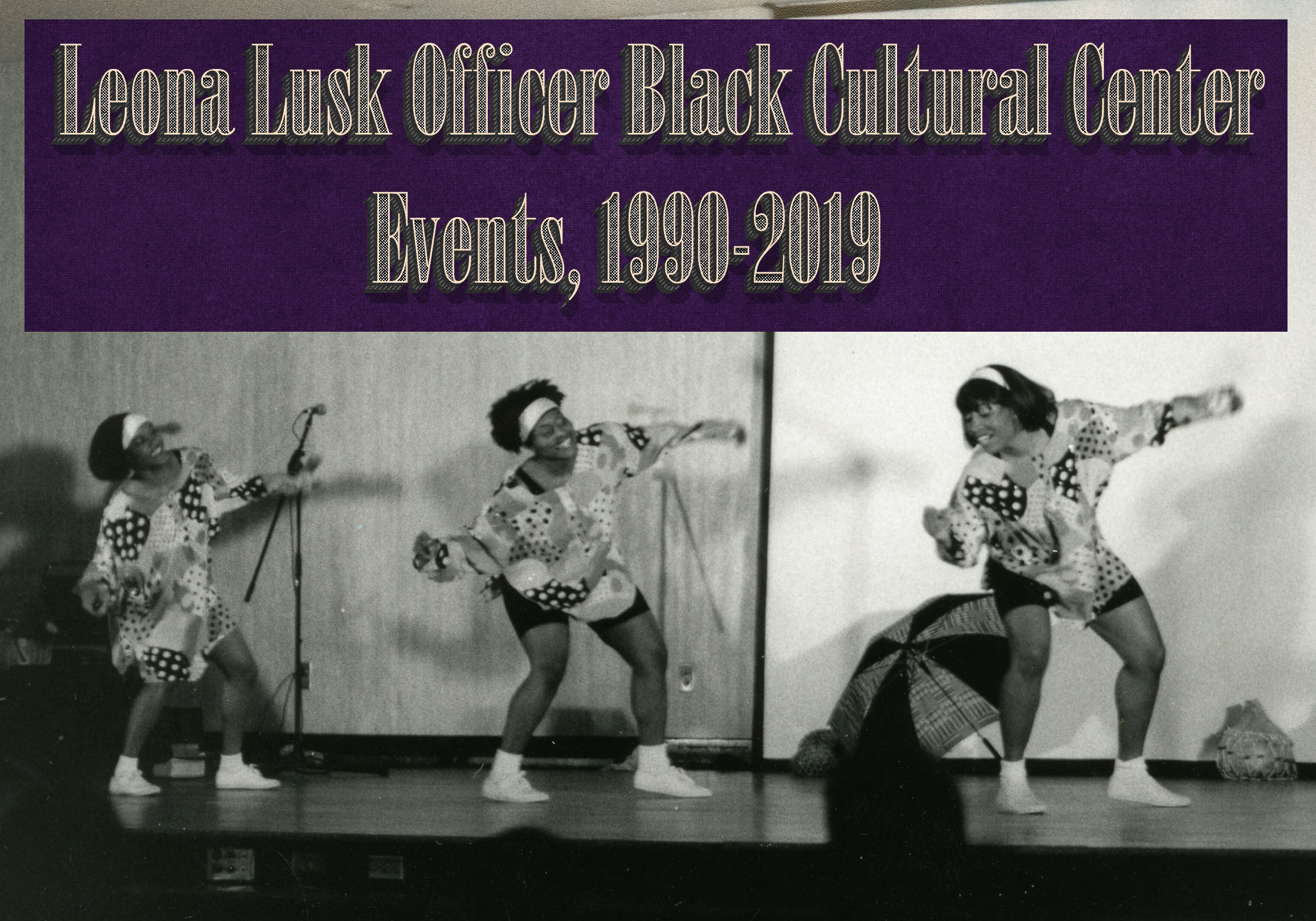 This exhibit features photographs of famous people on stages, however, it also includes some great stories and historical documents that add depth to the pictures. For instance, did you know Elvis’s last scheduled concert was at Tech? Or that a major record label signed Garth Brooks after playing Tech? More importantly, how did Tennessee Tech book these big-name acts? Acts like Creedence Clearwater Revival, Johnny Cash, Jefferson Starship, and The Temptations to name a few. The exhibit answers these questions and more.  You can see it at the Varsity Theatre (social distancing and masks required) or online at: https://tntecharchives.omeka.net/exhibits/show/bignameentertainment.

You can listen to the performers as you explore the online exhibit using this Spotify playlist: https://open.spotify.com/playlist/2ftNbzz22pNZ2t4eQYx2VK?si=UbYaZkclRdeNs0qISVO3TA.

Did you know there used to be a cemetery on Tennessee Tech’s campus? See the Lost Spaces exhibit at Putnam County Courthouse to learn more about places that used to be on campus but are no longer here. This exhibit is brought to you by University Archives and the Crawford Alumni Center. 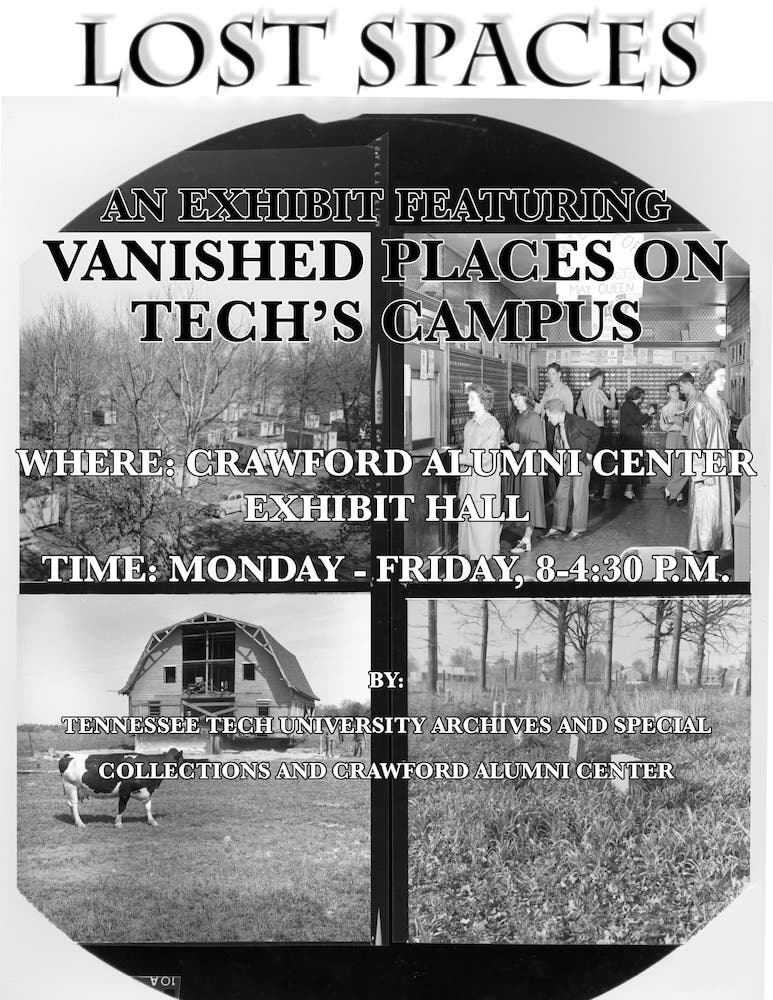 Did you know Angelo and Jennette Volpe Library turned 30 in 2019? This was not Tech's first library, though. Learn more by seeing the exhibit on the main floor of Volpe Library and check out the Archives blog. 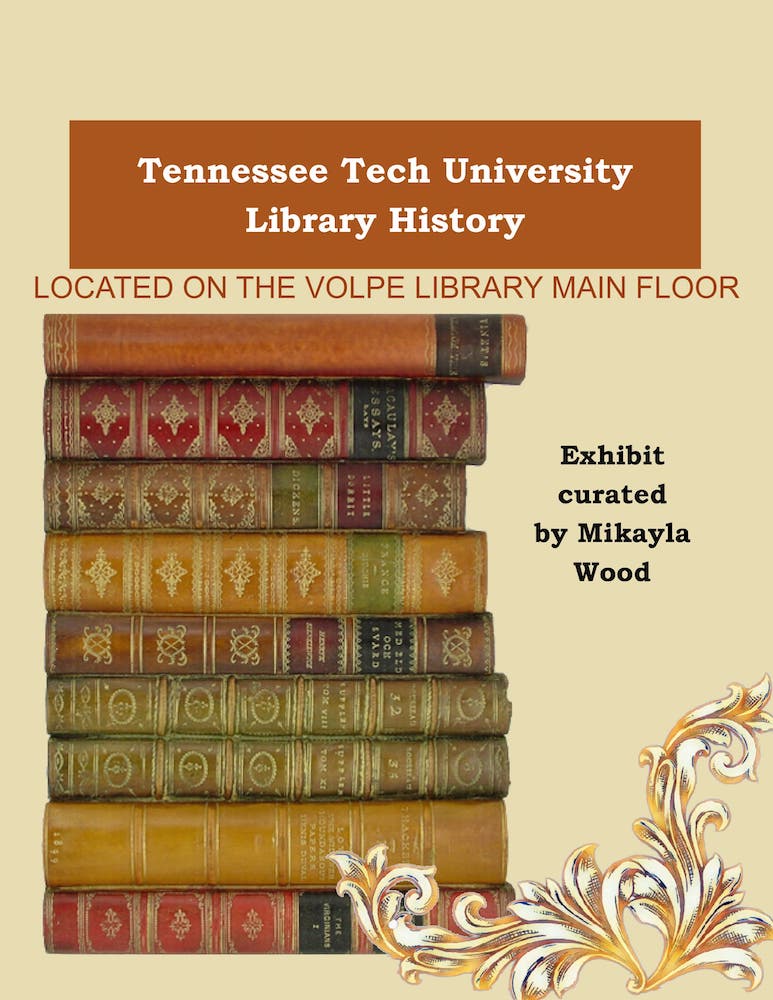 Come and check out some of the medical objects and archives held in Special Collections. This is exhibit is brought to you by collections donated to the University by Gary Dyer, donor of the Dyer Family Business papers; Dr. Sam Barnes, the donor of numerous artifacts in the exhibit; and Jeff Roberts, the donor the C. B. Roberts and E. L. Mooneyham Medical Collection. 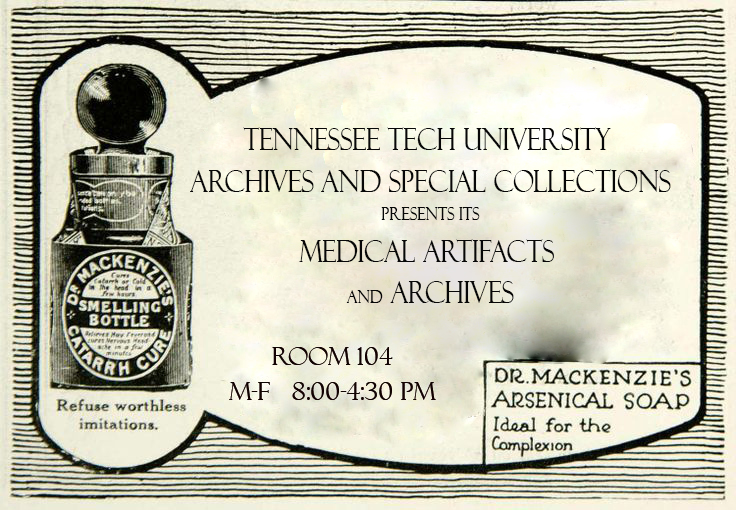 From Portraiture to Selfies

In Fall 2016 the Volpe Library presented an exhibit titled "From Portraiture to Selfie: A Brief History of the Social Significance of Photographs and the Techniques to Preserve them for the Future" in room 104 of the library. 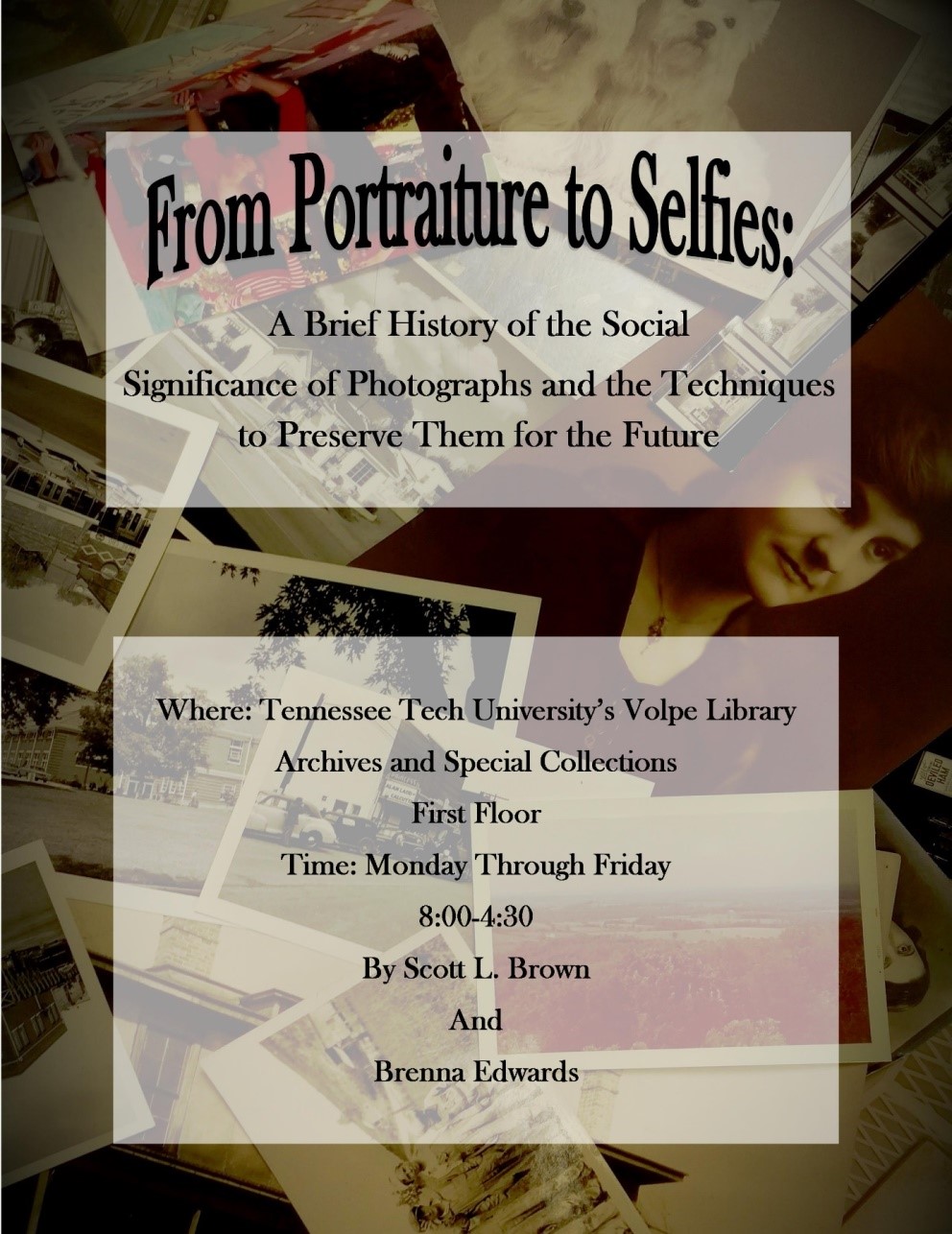 The Joe L. Evins Desk Conceptual Exhibit was in the iCube in the Volpe Library! This experimental exhibit incorporates the virtual reality and 3D printed objects into traditional museum collections. This was a collaborative effort of the iCube, MakerSpace, and the Archives and Special Collections departments.

World War I and Tennessee Tech University: The Wartime Experience at Tech 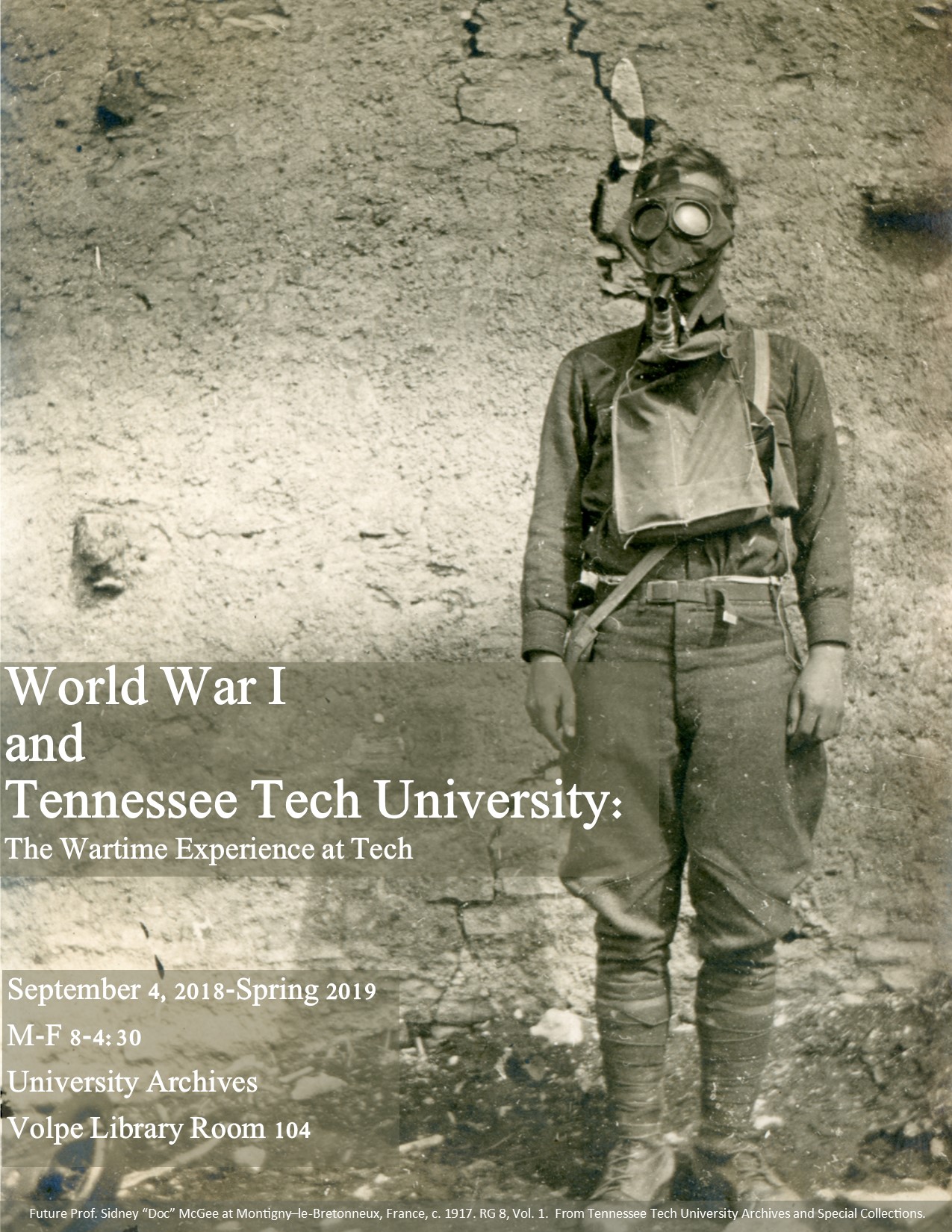 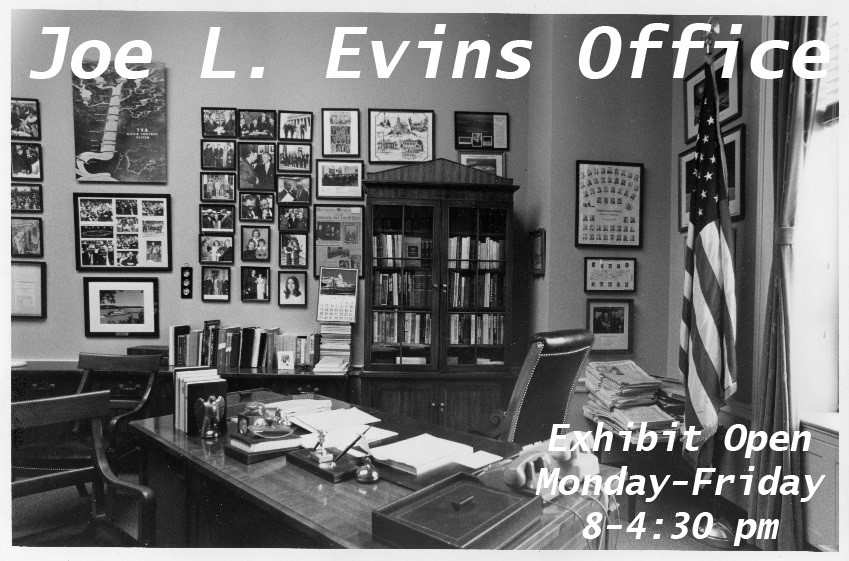 The Tennessee Tech Archives & Special Collections History Tour was created by Chasely Goodman and Kellie Price and allowed viewers to tour Tennessee Tech's beautiful campus and learn the history behind the buildings on the Quad.  The Quad is the original location of Tech's campus and the location of the land deed establishing the school in 1915.  Special thanks for this project goes to the Provost Micro-Grant for Digital Humanities in the Archives. 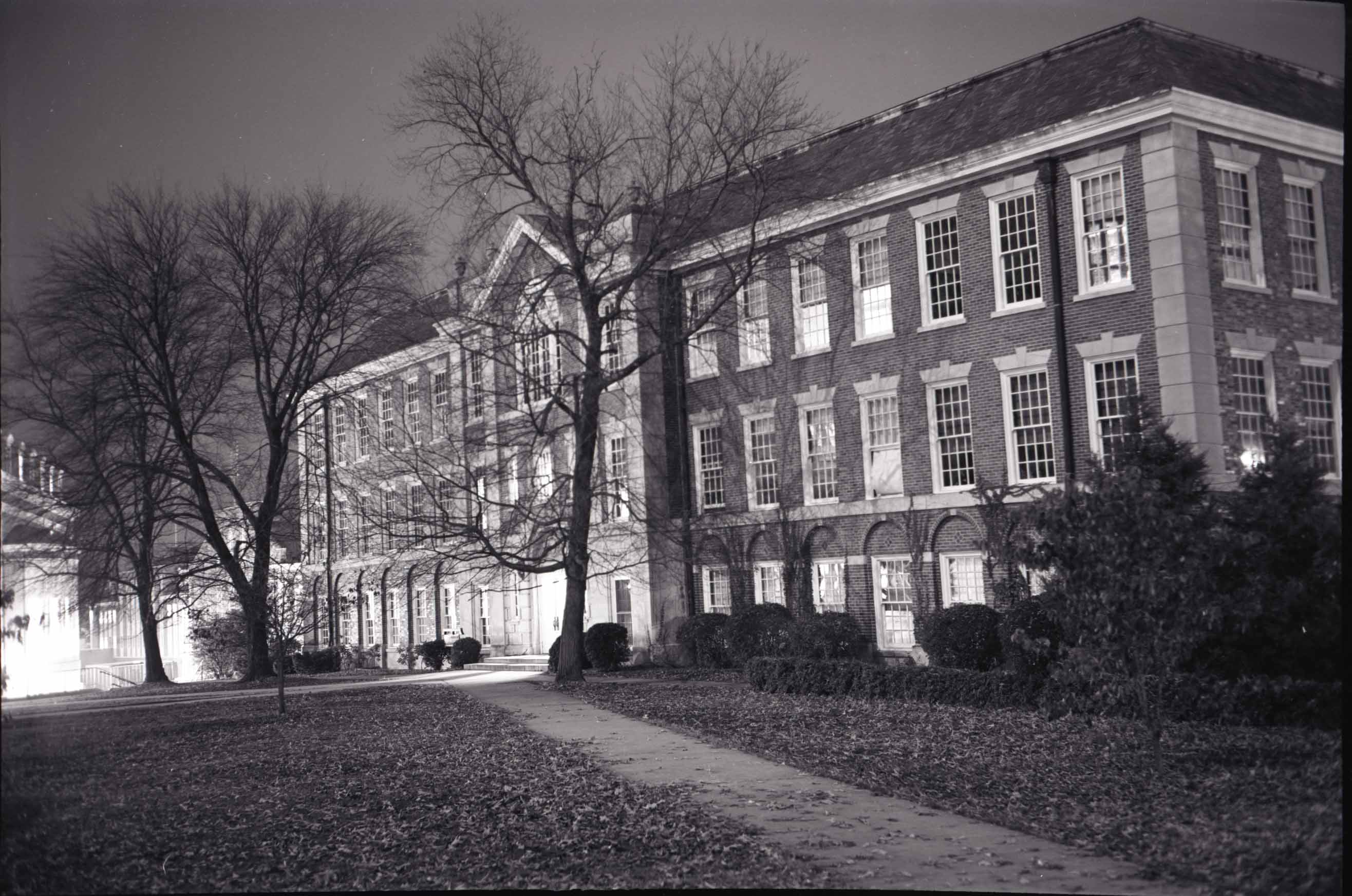 The Volpe Library welcomes your comments, questions, and suggestions.This form is submitted directly to the Library Dean.

Give us your feedback!
Contact Archives
Donate Apply Visit