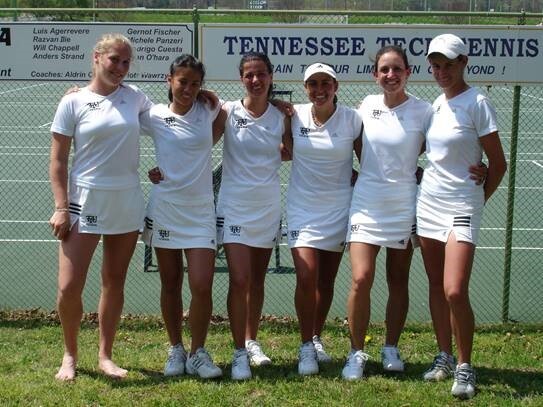 Eight former members of the Tennessee Tech women’s tennis team have remained friends since their time at Tech 20 years ago, despite living in four states and four countries. The secret to staying in touch, they said, is simple.

“It all comes down to a bit of effort.”

They came to Tech from all over the world, and their Tech degrees and experiences as student-athletes have led to impressive careers all around the world as well.

Melissa Cansado, `05 world cultures and business and `08 MBA, came to Tech from Argentina. After graduation, she returned to Argentina and worked for Citi Bank, then moved to Australia and managed a hotel, bar and restaurant. Today, she runs a safari company and plans safaris in Botswana and South Africa.

“I don’t know where I live,” she joked. “I live between the states, Argentina and Africa.”

Her teammates affectionately call Cansado “a citizen of the world.”

After graduation, Strand moved to Sweden where she coached for seven years. Today, she lives in Stockholm, works in security operations and is married to a former Tech men’s tennis player.

Ballard married Jason Ballard, `04 business management, a former Tech football player. They live in Nashville and both work for Nissan.

After two years at Tech, Mascall transferred to Grambling State University and graduated with her bachelor’s degree in business administration and management. After coaching for several years, she now works as a service operations manager for David Lloyd Leisure in Glasgow, Scotland.

Kay (Ngiam) Paradiso, `08 finance, came to Tech from Malaysia. After graduation, she joined the financial industry. Today, she lives in Virginia, just outside Washington, D.C., and works for a wealth management firm.

Alet (Boonzaaier) Filmalter, ’06 finance, came to Tech from Namibia. After graduating from Tech, Filmalter played professional tennis for the Women’s Tennis Association and was ranked internally with the Association of Tennis Professionals. She was even invited to participate in the 2008 Beijing Olympics. Today she lives in Florida and works as a financial planner at ForeThought Private Wealth.

Margot Carter, `06 biology and `11 M.S., came to Tech from England. After graduating from Tech with her bachelor’s degree, she competed on the professional tour and was ranked 451 in the world. Carter has coached all over the world, including a period of time where she returned to her alma mater and served as an assistant coach for Tech. Today, she owns a tennis club in Nashville called Spherical Yellow.

These former Golden Eagles credit their Tech degrees and experiences on the tennis team for much of their career success.

Paradiso added, “Tennis is such an individual sport. I remember these girls sat me down and said, ‘You’re part of a team. You need to figure out how to work with us. We are all supporting you.’ I think that’s really held true to any environment I’ve been in since then, whether it’s being a part of a family, being in a workplace or working with others.”

Thanks to video conferencing, messaging apps, cross-country road trips and the occasional international flight, these eight alumni have managed to keep in touch for two decades, despite living thousands of miles from one another. They are planning reunions in New York City, Las Vegas and Paris -- to attend the French Open, of course. And five of them reunited in Cookeville for homecoming this month!

“Being an athlete and being with all of these girls has been the best experience of my life,” said Strand. “We learn from each other and we learn about our cultures.”

Paradiso added, “We are still a team.”