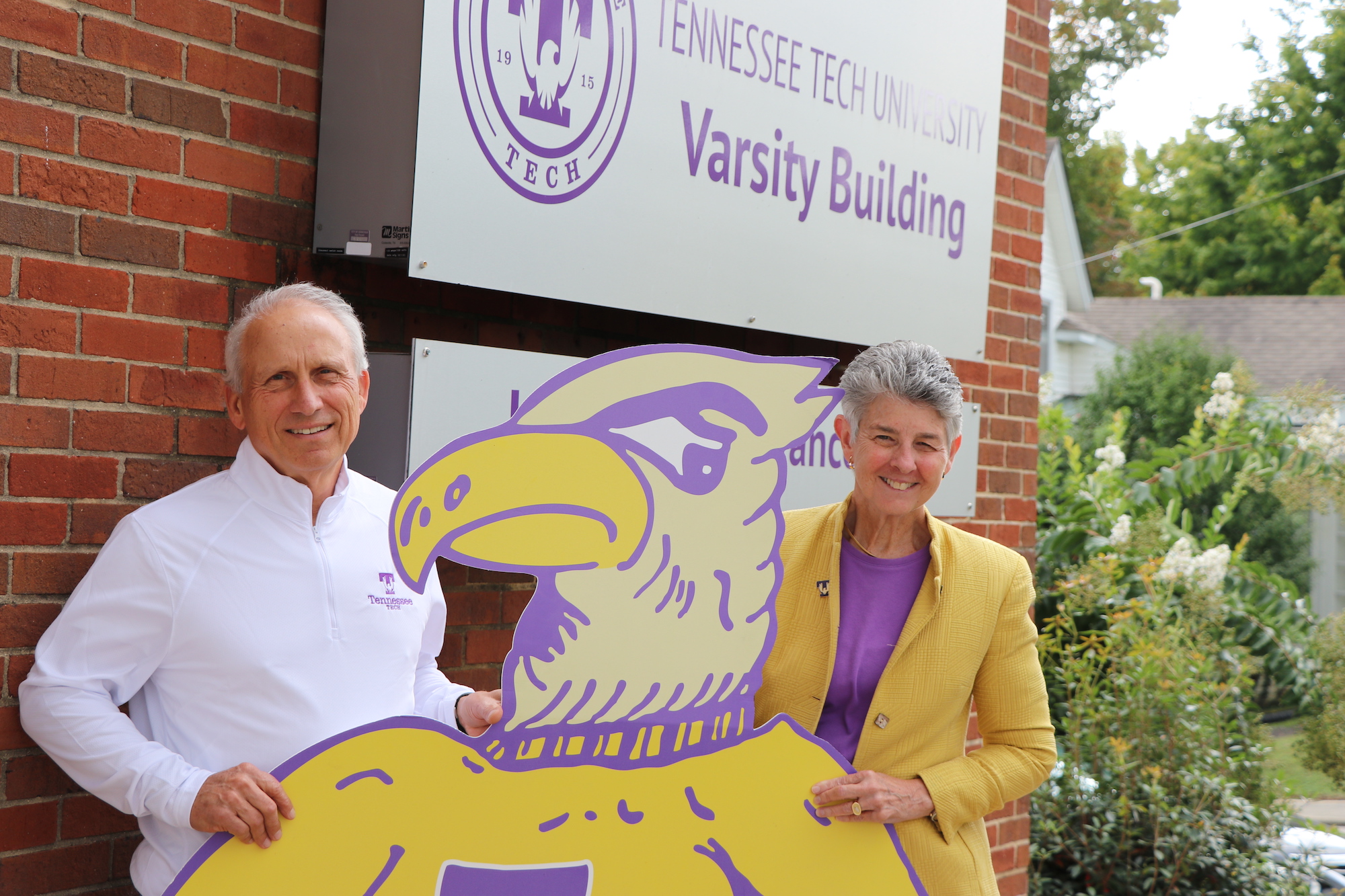 Decades of friendship and a love for Golden Eagle Athletics have inspired two Tennessee Tech alumni to partner in leading fundraising efforts for a Football Operations Center on campus.

Ottis Phillips and M. Dianne Murphy grew up in Cookeville, attended the same church and were in the same high school class. They also experienced firsthand what it’s like to play for the Golden Eagles:  Phillips was a member of Tech’s football team and Murphy played basketball, volleyball and tennis. Now, they are focused on helping the next generation of student-athletes, using the knowledge and experience they gained at Tech and in their careers to establish a new facility for Tech football.

“I wasn’t a great athlete,” Phillips recalled. “But by sheer determination, I’d hang in there. Dianne was the same way, not necessarily a gifted athlete but athletic and worked really hard to play college basketball. That’s a tremendous credit to her and her willingness to get out there and play – not just one sport but three sports. I always say if it were easy, anyone would do it. Playing on an athletic team in college is not easy. It teaches you determination, how to work with teammates and how to build relationships.”

Murphy received her bachelor’s and master’s degrees in health and physical education from Tech. After earning a Ph.D. from Florida State University, she went on to serve as athletics director for the University of Denver and Columbia University. Under her leadership at Denver, eight sports programs made NCAA tournament appearances, and Denver teams won four national titles. Murphy then presided over one of the most successful periods in Columbia University Athletics history. During her 11-year tenure, Columbia won 30 Ivy League titles and a national title, and in 2013-14 saw its most successful year with five Ancient Eight titles. In 2016, Murphy joined The PICTOR Group. Today, she serves as vice president, assisting intercollegiate athletics programs with increasing their effectiveness.

Phillips graduated from Tech with a bachelor’s degree in mechanical engineering and an MBA and was a member of the Golden Eagle football team from 1969 to 1972. He achieved career success through serving as the general manager then owner of SEC Enterprises, president of Mid-South Distributing and most recently, president and chief executive officer of Progressive Savings Bank.

Phillips and Murphy credit their Tech education for successful careers. Both are members of Tech’s Foundation Board, and Murphy says when the topic of Tech’s football facilities came up at a meeting, she knew she wanted to partner with her friend on the project.

“I said to Ottis, ‘Let’s you and I work together on this,’” said Murphy. “’You’re a football alum. You know these guys. You should take the lead, and I’ll serve as an advisor. I know how to raise money. I’ll be by your side, and we’ll be teammates.’”

“Dr. Oldham was enthusiastic and excited about this project,” said Phillips. “Then we met with Mark who shared ideas and started to get the ball rolling. And Coach A is our biggest cheerleader.”

“Everyone just came together,” said Murphy. “Everyone said, ‘This will be great. Let’s go for it.’”

Phillips and Murphy have devoted hundreds of hours to the Football Operations Center steering committee, and both made significant financial commitments as well. When the facility is complete, Phillips and Murphy will each have the opportunity to name a space inside the building. Generations of future student-athletes will know their names and their commitment to Tech football.

Decades of friendship and a mutual respect for one another have only strengthened their commitment to the project.

“I have tremendous respect for Ottis, both as a professional and as a friend,” said Murphy.

“I have always had a tremendous amount of respect for Dianne,” he said. “She had an incredible career in coaching and administration and did an outstanding job at Columbia. She’s a very, very hard worker. I have to give her so much credit for getting this going and getting everyone excited.”

Murphy says Tech’s presidents have done so much throughout the years to improve and expand the campus, and the time is right for Tech to have its own Football Operations Center.

“I encourage people to support this effort,” she said. “I love football. I know what a successful football team and a great facility can do for the university. A winning athletic program helps with campus and community pride. Outstanding facilities recruit students to campus, and a Football Operations Center will recruit talented student-athletes.”

Phillips added, “This is a game-changer in making Tech football more competitive. This facility will attract young men who are going to make a difference in this program. It’s a win for athletics, a win for our university and a win for our community.”