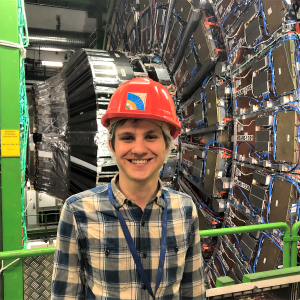 After graduating from Tennessee Tech in 2013, Kenneth pursued his Ph.D. in experimental particle physics at the University of Wisconsin-Madison, graduating in 2019. His Ph.D. work focused on the study of proton-proton collisions at the Large Hadron Collider (LHC) at CERN (The European Organization for Nuclear Research) in Geneva, Switzerland, as part of the Compact Muon Solenoid (CMS) Collaboration. During his Ph.D., Kenneth spent 3 years working from CERN in Geneva where he contributed to the operation and study of the muon detectors. The focus of his thesis was the first direct measurement of a rare type of proton collisions that produce both a W and Z boson, which directly interact.

Following his Ph.D., Kenneth spent two years at CERN as a Research Fellow, and is currently a Senior Postdoctoral Researcher at MIT. His work focuses on performing extremely precise measurements of known phenomena to detect small deviations from the predictions of the standard model, the current best theory describing all known forces and interactions. In addition, he works on developing novel techniques to convert the electrical signals of physics detectors into signs of particles from collisions using modern machine learning techniques.