Ecologist and Associate Professor of Biology at Tennessee Tech Justin Murdock and graduate students Jason Payne and Jordan Evans are studying streams and lakes in the Mississippi Delta region in northwest Mississippi to determine the impacts of agricultural runoff on aquatic ecosystems.

Specifically they are studying how these aquatic agroecosystems can be managed to improve habitat quality and reduce pollutant transport downstream. The work is being funded by the U.S. Department of Agriculture in an effort to enhance the quality of water resources within the region.

“The goal of this work is to look at how nutrients from fertilizers and eroded soil in runoff from fields impact the health of streams and lakes in this heavily agricultural region. This will help farmers and land managers minimize impacts on local waterways and downstream aquatic ecosystems, as they aim to maximize and continue to increase crop production to feed a growing population,” Murdock said.

The research occurs in the Mississippi River’s Alluvial floodplain region in northwestern Mississippi, also known as the “Mississippi Delta,” and focuses on slowly flowing bayou systems that include shallow lakes, streams, and wetlands. This work incorporates a combination of field surveys, laboratory experiments and computer modeling. 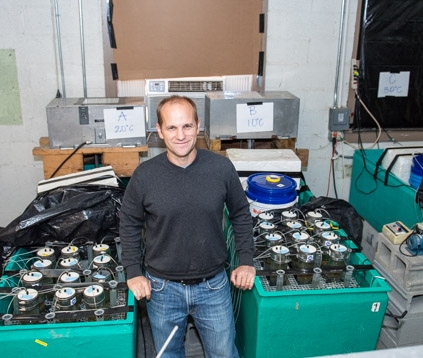 One aspect researchers are looking at is how the amount of water in the lakes and streams effects the system’s ability to process pollutants and provide adequate habitat for the organisms that live in there.

“Irrigation water withdrawal from both surface and groundwater is substantial in this region, with the timing and amount of irrigation often dictating stream flow and lake depths. Thus, water management provides a potential avenue to lessen the impacts of runoff pollutants,” Murdock said. “Particularly because the depth and movement of the water can change the environment for the microbes that do much of the chemical processing.”

Payne’s work involves studying how lake depth affects oxygen levels, as these lakes often go hypoxic (have very low oxygen levels) which leads to frequent fish kills. Oxygen in these lakes is mainly produced during the day through algal photosynthesis and continuously consumed by bacteria and algae as they grow. Nutrients like nitrogen and phosphorus can cause excessive growth of algae and bacteria, and suspended sediment can reduce light for photosynthesis. Thus there is a balancing act of oxygen creation and use that can be tipped by different combinations of pollutants. When more oxygen is used than produced, aquatic organisms can get stressed or die.

Murdock and Payne measure the oxygen balance in the water column and lake sediments under varying depth, light and temperature conditions and create lake maps that predict how oxygen levels will change in different parts of the lake under varying water depth scenarios.

Evans’ research focuses mainly on understanding how water depth changes a lake’s ability to remove nitrogen through the process of denitrification. This process, which changes dissolved nitrate to nitrogen gas, is done by microbes and is the only pathway that permanently removes nitrogen from the water by passing it to the atmosphere.

“Nitrogen is an important nutrient for crop growth in the region, but also can fuel algal blooms in aquatic ecosystems when it enters lakes and streams through runoff. Agriculturally introduced nitrogen is one of the major causes of the hypoxia in the Delta, but also is a major cause of hypoxia in the Gulf of Mexico as streams feed nitrogen into the Mississippi River, and then into the Gulf. One of our lab’s goals if to find ways to maximize nitrogen retention and removal in the Delta aquatic ecosystems to reduce the region’s nitrogen loading footprint into the Mississippi River,” Murdock said.

A key interaction of Payne’s and Evans’ research is that denitrification is greatest when oxygen is low. Evan’s work aims to understand how different combinations of water depth, nutrient and sediment inflow, and water temperature effect denitrification.

“Ultimately we hope to determine water quality conditions that produce the best balance of ecosystem oxygen concentrations to maximize both nitrogen removal and habitat quality for organisms like fishes,” Murdock said. “A lot of time and money are spent installing management practices in fields or along stream edges to reduce agricultural pollution in runoff. We are trying to help focus the use of limited pollution mitigation resources to enhance Delta aquatic ecosystem health and increase the beneficial services these systems provide.”