Birds of a Feather Stories 2021

In honor of National Best Friend Day on June 8, we asked Tennessee Tech alumni to share the stories of how they met their best friend on campus. We randomly selected one of the stories submitted, and Elisa Tanksley Mask’s story of how she met not one but TWO best friends at Tech was the winner. She will receive some Tech SWAG to share with her besties! 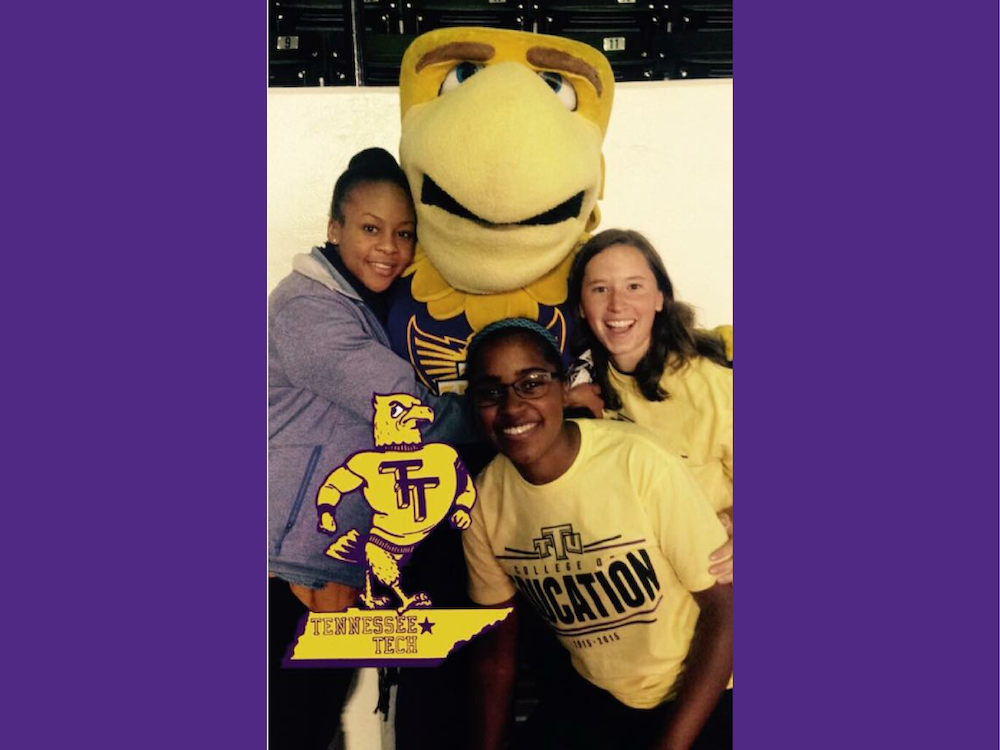 Year They Met: 2010
Elisa: I'm lucky enough to not have just one, but two best friends from my time at TTU. Brittany Wiggins and I met in New Hall South and were neighbors in the same hall. Melissa lived in Crawford but quickly became a good friend as well. I could fill a novel with all the crazy adventure we had in our four years at Tech, from swimming at Cummins Falls, to exploring the now closed treehouse in Crossville to sledding down snow covered hills on campus in the middle of the night on cardboard boxes we found. Our friendship has stayed strong even after graduation. Melissa is an officer in the United States Army and Brittany is a travel nurse, but that has yet to stop us from going on "girls trips" to the Caribbean, Canada and the Blue Ridge Mountains. We still talk at least once a month and have a group chat we use almost daily. These girls have been there for me through thick and thin; they were even the ones who talked me into joining a dating app where I ended up meeting my husband! I don't know how different my life would be without them, but I do know my life would be worse off without them in it. I owe them so much more than I could ever tell them. 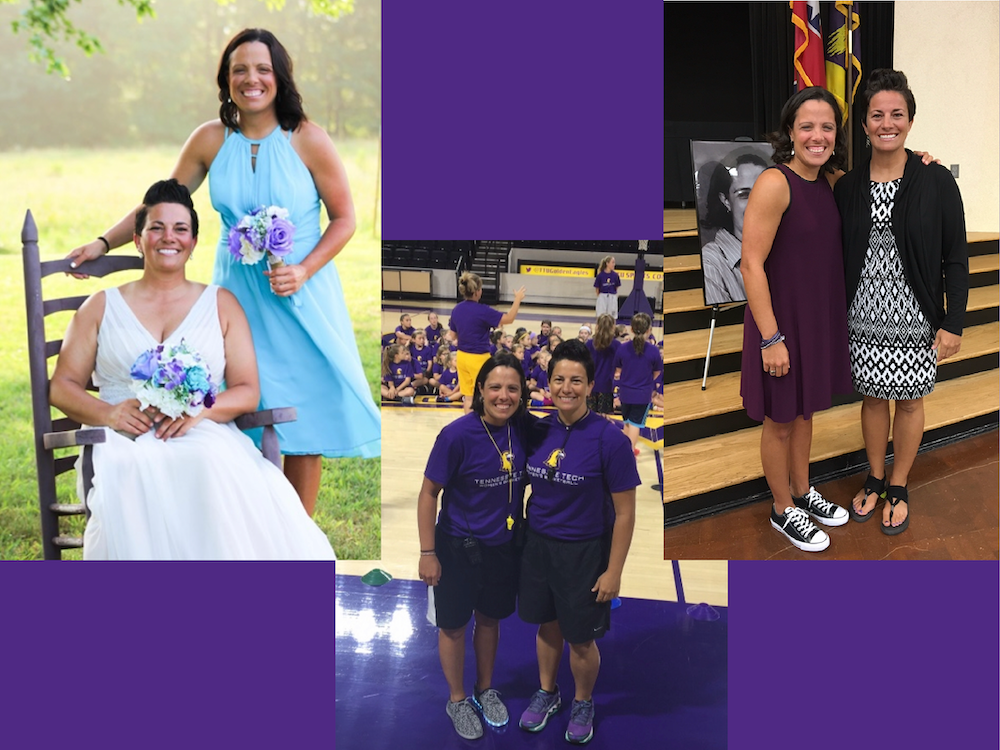 Year They Met: 1998
Allison: I arrived at Tennessee Tech in the fall of 1998. I transferred to Tech from the University of North Texas. When I was being recruited for basketball, I thought I wanted to go far away from home. Needless to say, God had other plans. My grandfather was diagnosed with pancreatic cancer so I felt like I needed to come back home. Tech had recruited me out of high school so I was very familiar with the coaching staff and the school. Coach Bill Worrell was gracious enough to allow me to come back home to Tech where I have spent almost half of my life now.

When I arrived on campus, I met Misty Garrett. She was from down the road in Livingston, TN. She would be my roommate for the upcoming season. We instantly became best friends. She would become not only my roommate and teammate, but she became family. I had such a great experience at Tennessee Tech. Misty and I won 4 OVC Regular Championships together, 2 NCAA Tournament Births and a lifetime full of memories. When I graduated from Tech and began my coaching career, I knew I always wanted to find my back "home" one day. On June 1st I start year #10 coaching at my alma mater and where I met my best friend.

Misty and I have been best friends for over 20+ years. We've celebrated victories and defeats, births and deaths, good times and hard times. We've been a constant support system throughout our lives. I've been beside her when she got married. She's been beside me when I was inducted into the TTU Sports Hall of Fame. I will forever be grateful that God allowed our wings to fly to Cookeville.

As the song, Wind Beneath My Wings says, "Did you ever know that you're my hero? You're everything I would like to be. I can fly higher than an eagle. You are the wind beneath my wings."

If there were ever two birds that flocked together, it was Misty Garrett and Allison Clark.

We were inseparable. Tennessee Tech is a special place where you meet people that become family. Misty Garrett is not only my best friend, but she is my hero. She's the best person I know. Her kindness, her love for people and her forgiving spirit are beyond anything I've ever witnessed.

I’ll forever be thankful for the opportunities and friendships I made and continue to make at Tennessee Tech.  This is the story of how Two Birds Flocked Together and have been "Soaring" ever since. 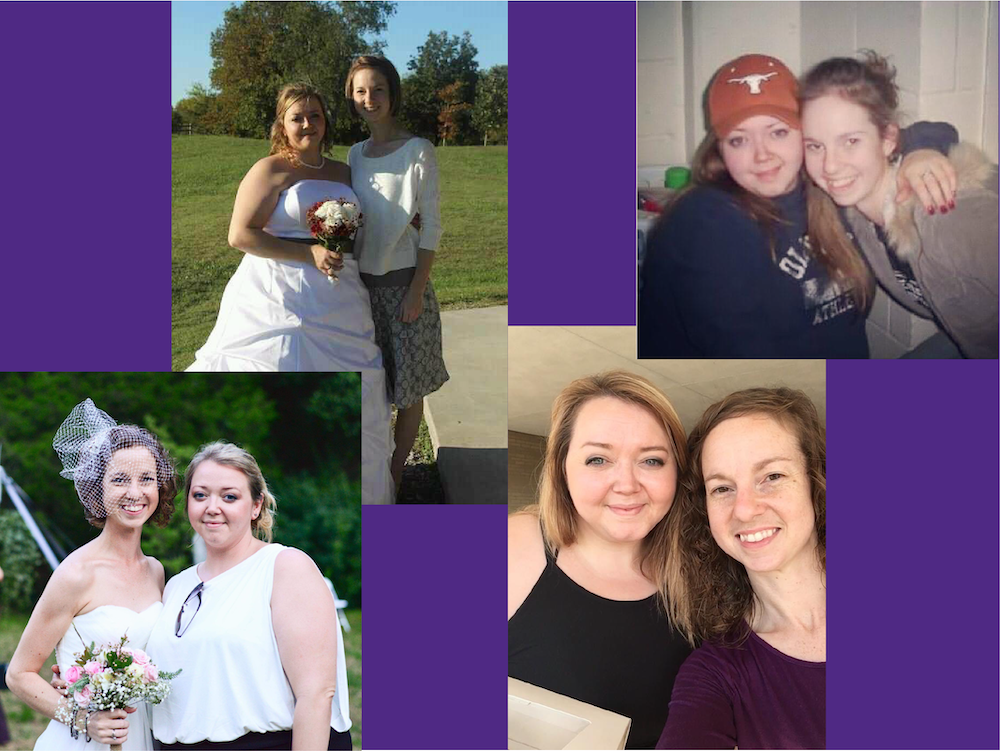 Year They Met:  2004
Brittany: I had just started my sophomore year at Tech and moved into Ellington with a new roommate. I barely knew anyone. My roommate introduced me to Emily and her group of friends that she knew from her hometown. Freshman year was rough on me because I was homesick, introverted and knew only a couple people from my high school, but they took me in and the rest is history. Emily and I eventually became roommates in the dorms and neighbors when we moved off campus. We shared so many fun times in the dorms and began one of our favorite traditions. When we were feeling down or life was hectic, we’d sit in the car for hours and sing to the top of our lungs. Somehow it made everything better. Since then, we’ve been there for each other through the good times and bad, in spite of living in different parts of the state. Love, heartache, marriage, children, celebration and loss. I’ll forever be grateful for the times we shared and our memories from Tech will never be forgotten. 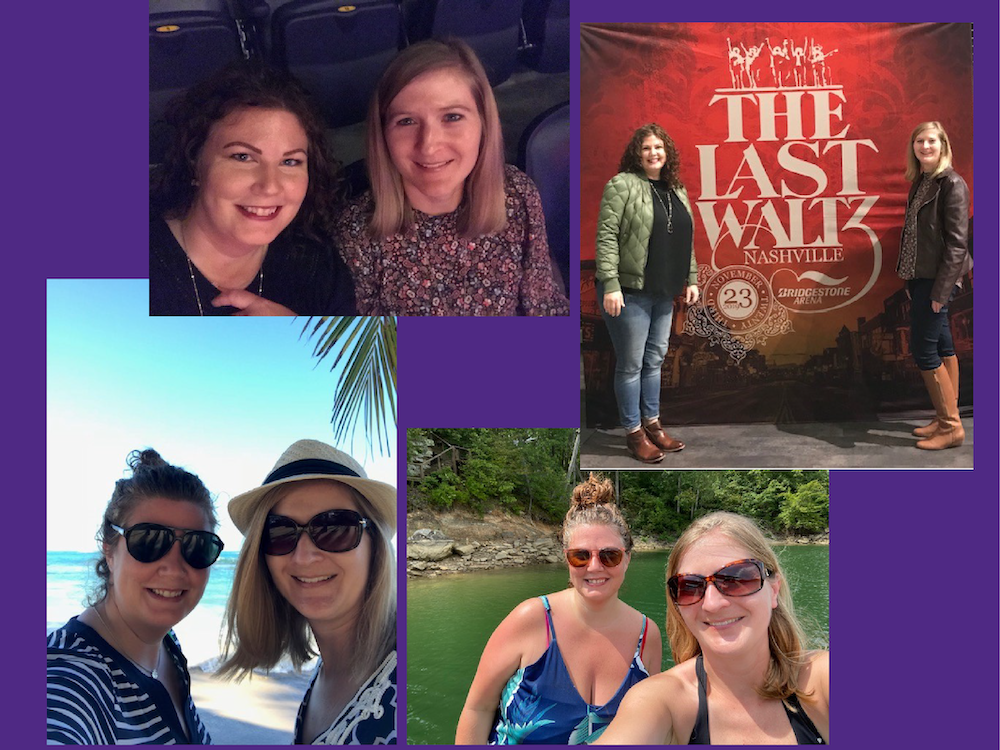 Year They Met:  2001
Kelly: I met Emily through our sorority, Phi Mu. We were both looking for a roommate, and we rented a house on Mississippi Ave. We quickly bonded over our love of Friends (and the need to quote it as often as possible), ghost hunting shows, sandwiches, travel, music, and more. We spent many nights and weekends going to concerts all over the southeast, binge watching Friends, Felicity, and The Office on DVD (this was before Netflix), building snowmen in our yard on snow days, sitting on our front porch on summer evenings, and driving to the T-Mart at midnight for snacks. Twenty years later, we still text almost every day, talk on the phone every week, and try to go on a trip together every year. I don’t know what my college experience (or the years since) would have been like without Emily, but I know it would have been a lot less fun and included a lot fewer laughs. 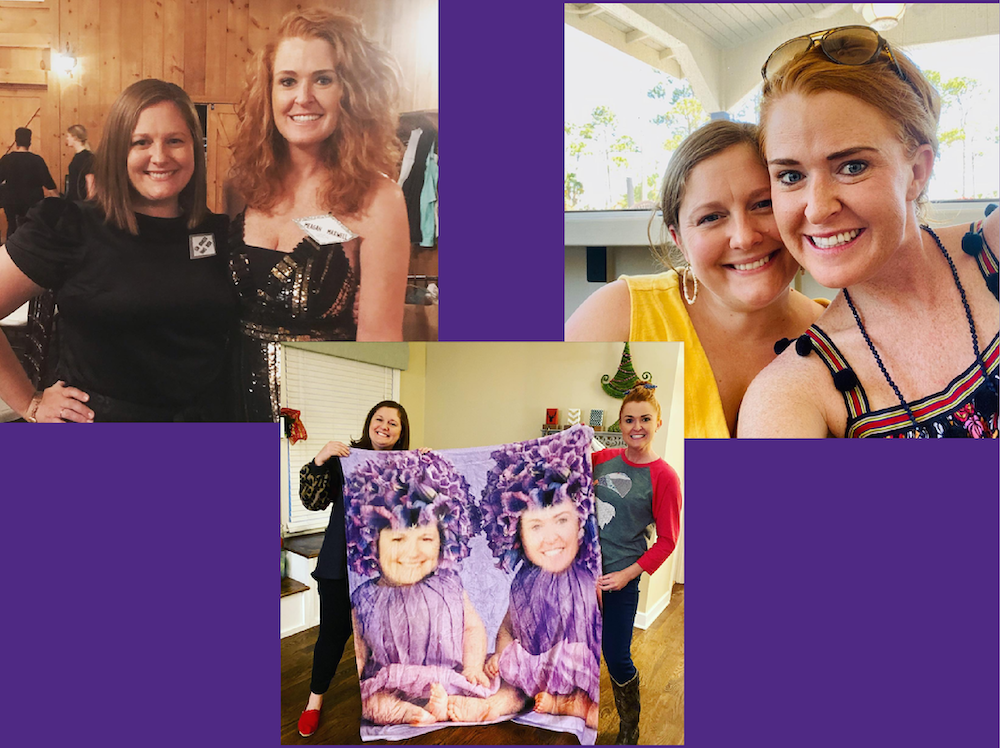 Year They Met:  2002
Elsah:  Meagan and I became sorority sisters in September of 2002.  We were both freshmen at the time and became Alpha (pledge) members of Alpha Delta Pi.  We ran home to our sorority on a hot September day and from the moment I saw Meagan with her flaming red hair and confident air, I did not like her.  I wasn't from Cookeville and she was.  She seemed to know everyone and had no trouble with the beginnings of college life.  I had no real reasons to dislike her! I guess you could call it jealousy but I just never thought we would be friends.  Slowly though, throughout the semester things changed.  We attended sorority meetings, Tech events, etc. with our sisters, and Meagan and I began to hang out. I started to realize how funny she was and how we seemed to mesh so well!

Let's just say Meagan is the yin to my yang and the Lucy to my Ethel.  She was the more outgoing, risk-taker while I was the sensible, understated one.  She brought me out of my shell while I attempted to keep her in hers for the sake of keeping her out of trouble!  By the second semester of our freshman year, we were thick as thieves.  We were able to finish out our time at Tech as fellow business majors, sorority sisters, and best friends.

We continue to be best friends to this day.  We were in each other's weddings, have been pregnant at the same time (having boys two months apart from one another), and now vacation together with our husbands who are also friends!  I ended up having two redheaded children myself which was quite a surprise.  No one in my husband's family has red hair, and I am adopted.  Since Meagan has red hair, we always joke that Meagan is the father of my children!  We also joke that we will be old biddies together at the nursing home one day cracking jokes and causing trouble.  I couldn't imagine my life without Meagan, and I have Tennessee Tech to thank for that! 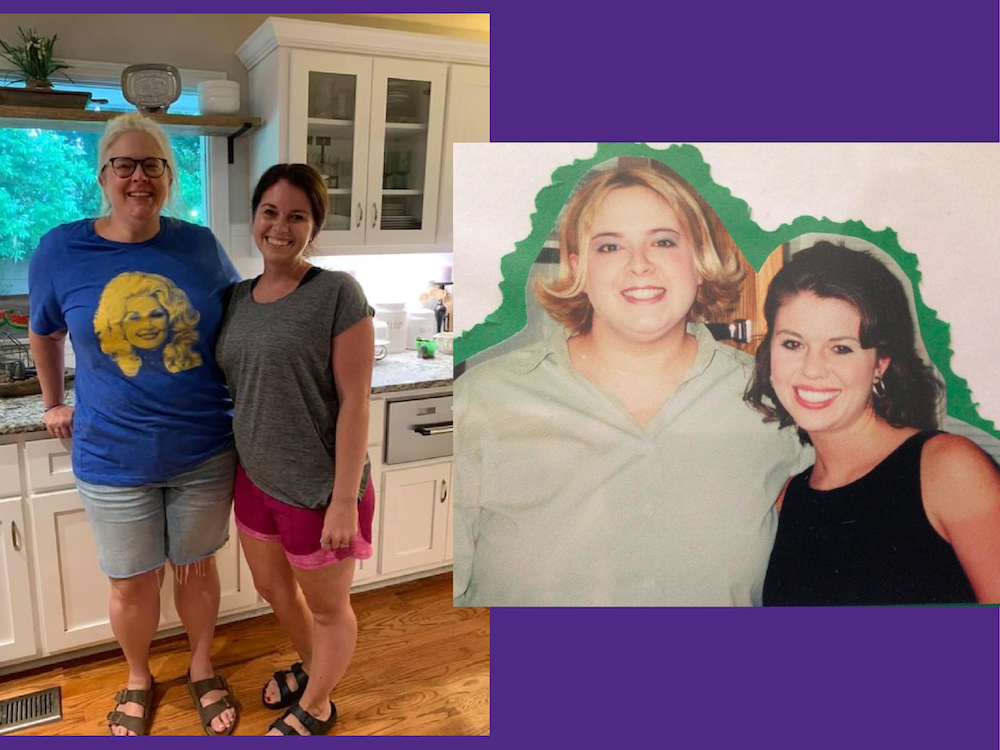 Year They Met:  2000
Melissa: We were roommates in the fall of 2000 in Jobe Hall. We have stayed in touch and been there for one another over the years. I was a bridesmaid in her wedding, and she was there for me on my wedding day. We live in different states now but visit one another when we can. Our last visit was the summer of 2020 when my family visited her and her family. 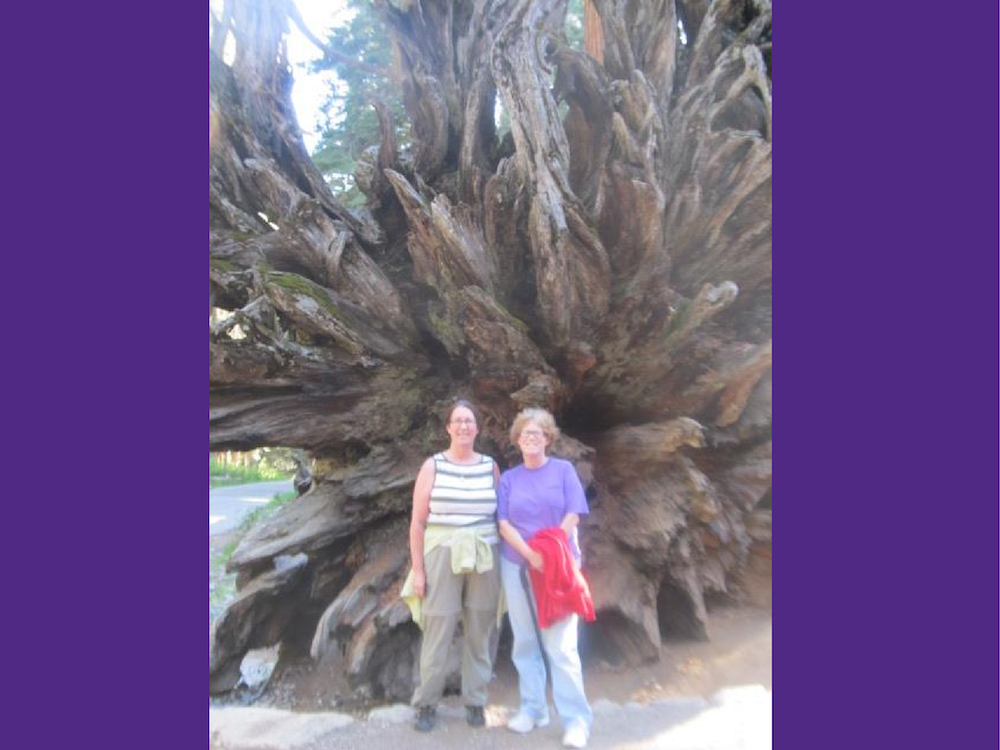 Year They Met:  1972
Connie: It was my first year at Tech and I was trying to meet people. I had worked on plays in high school and enjoyed it, so I thought I'd try going to the Tech theatre and see what was up. At the time, the group was rehearsing for the 1776 production. I walked over and asked the first person I saw how could I help.  They said to go upstairs and talk to the costuming person; she always needs help. I went upstairs and asked the woman sewing how could I help.  She looks at me and says, “Can you sew?” I said yes, and she promptly told me to sit down at the empty sewing machine next to her and start sewing together this pile of shirts sitting on top the sewing machine.  I sewed a great deal that quarter, and Kathy and I have been friends ever since. We both still sew and now travel some together.