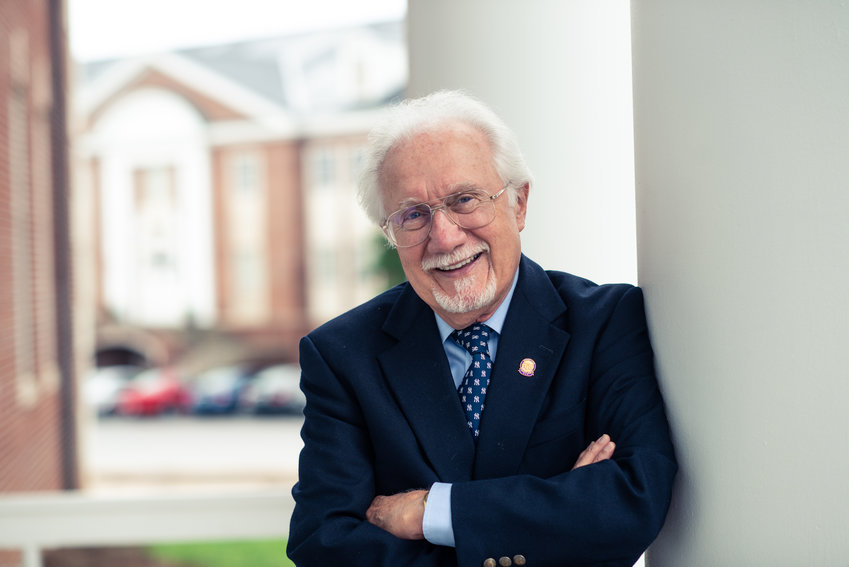 Dr. Volpe led Tennessee Tech University as its seventh president, serving from 1987 to 2000. Under Dr. Volpe, Tech saw its endowment grow from $1 million to $27 million, drew acclaim for its academic and athletic programs and developed a sense of community. During his tenure, the campus Fitness Center, Hyder-Burks Agricultural Pavilion and library, named for Dr. Volpe and his wife Jennette, were built. Dr. Volpe also fought to keep the Appalachian Center for Craft open for education, created two chairs of excellence and established the Women's Center and Leona Lusk Officer Black Cultural Center.

Dr. Volpe died on May 8 at his home. On May 12, the Tech campus and Cookeville communities attended his visitation in Volpe Library, and campus flags were flown at half staff on May 12 and 13 in his honor. 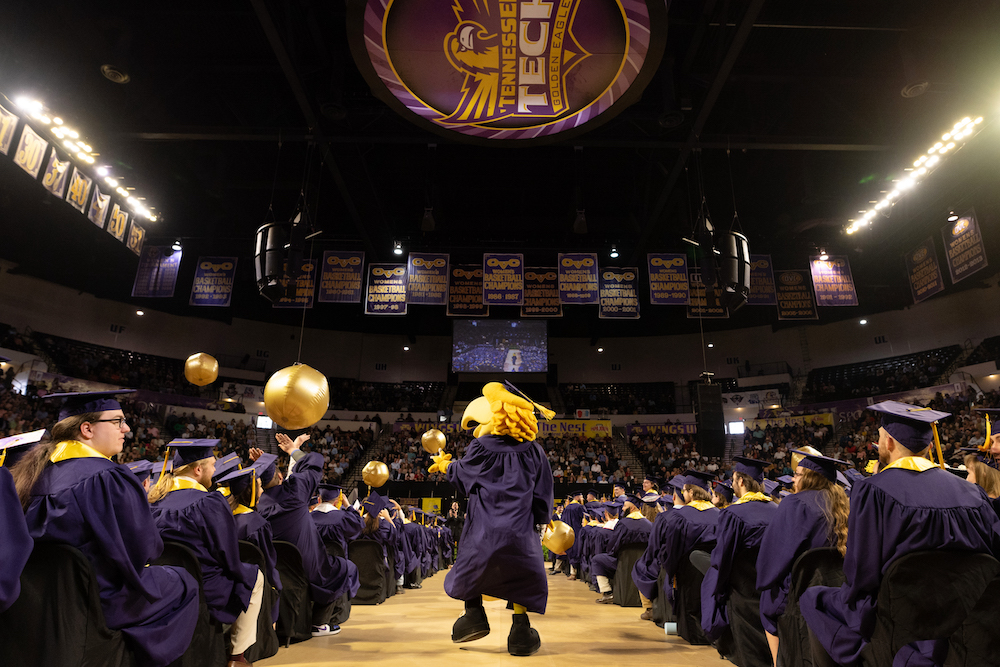 More than 1,500 graduates received degrees on May 6 at Tennessee Tech's Spring Commencement ceremonies, plus heard encouragement and congratulations from a major league baseball player, a cancer survivor and a student leader.

Former Tech baseball player Ethan Roberts of Sparta, who made his major league pitching debut for the Chicago Cubs just a few weeks ago, sent a video message. Cesar Espinoza, a nursing graduate, talked about having overcome a serious health issue. Braden Hammer, a graduating biochemistry and molecular biology major, represented the Trailblazers, student ambassadors who give personal tours and make perspective students feel welcome. And Governor Bill Lee spoke to graduates at the afternoon ceremony, as his family also celebrated a student earning a degree. 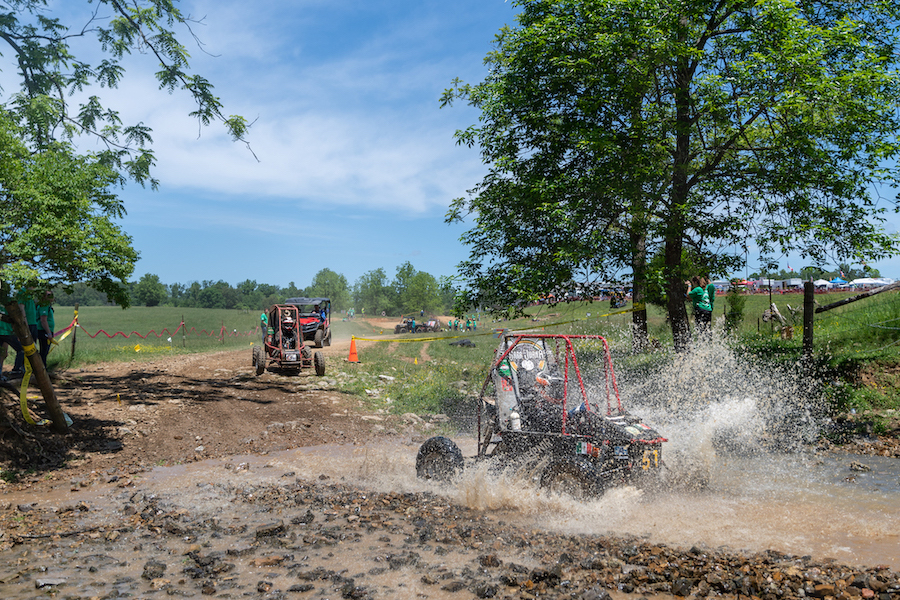 Baja teams from around the world gathered at Tennessee Tech's Hyder-Burks Agricultural Pavilion to compete in the Society of Automotive Engineers (SAE) Collegiate Design Series competition held May 12-13.

The Baja SAE competition consists of students designing and building small off-road vehicles to be a prototype for a reliable, maintainable, ergonomic and economic production vehicle. 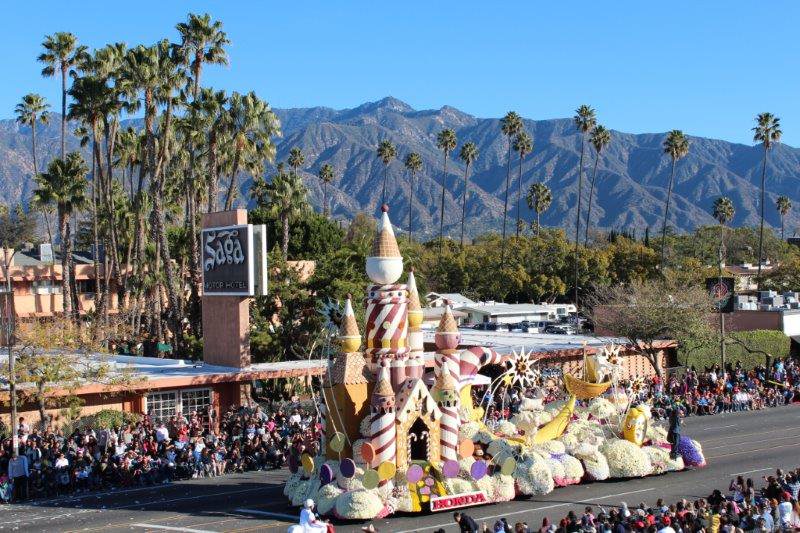 If seeing the Tournament of Roses Parade in person is on your bucket list, you'll want to check out the trip we have planned for Tennessee Tech alumni and friends Dec. 30, 2022-Jan. 4, 2023. The itinerary includes San Diego, Hollywood, Beverly Hills, the Richard Nixon Presidential Library and Museum, a New Year's Eve dinner party and more. It also includes grandstand seating for the Tournament of Roses Parade!

Visit the Golden Eagle Travel website to view the full itinerary, and use web code 157556 to register.

Wing Up Across America!

Did you meet your best friend at Tennessee Tech? How and where did you meet? Do you still keep in touch? The Crawford Alumni Center wants to hear your stories!

In honor of National Best Friend Day on June 8, we are hosting our second annual "Birds of a Feather" contest. The winner will be featured in our "Birds of a Feather" showcase and win some Tech SWAG! Click the link below to submit your story and enter this year's contest.

Birds of a feather flock together, and Tennessee Tech Golden Eagles form friendships that last a lifetime!

Submit birds of a feather story 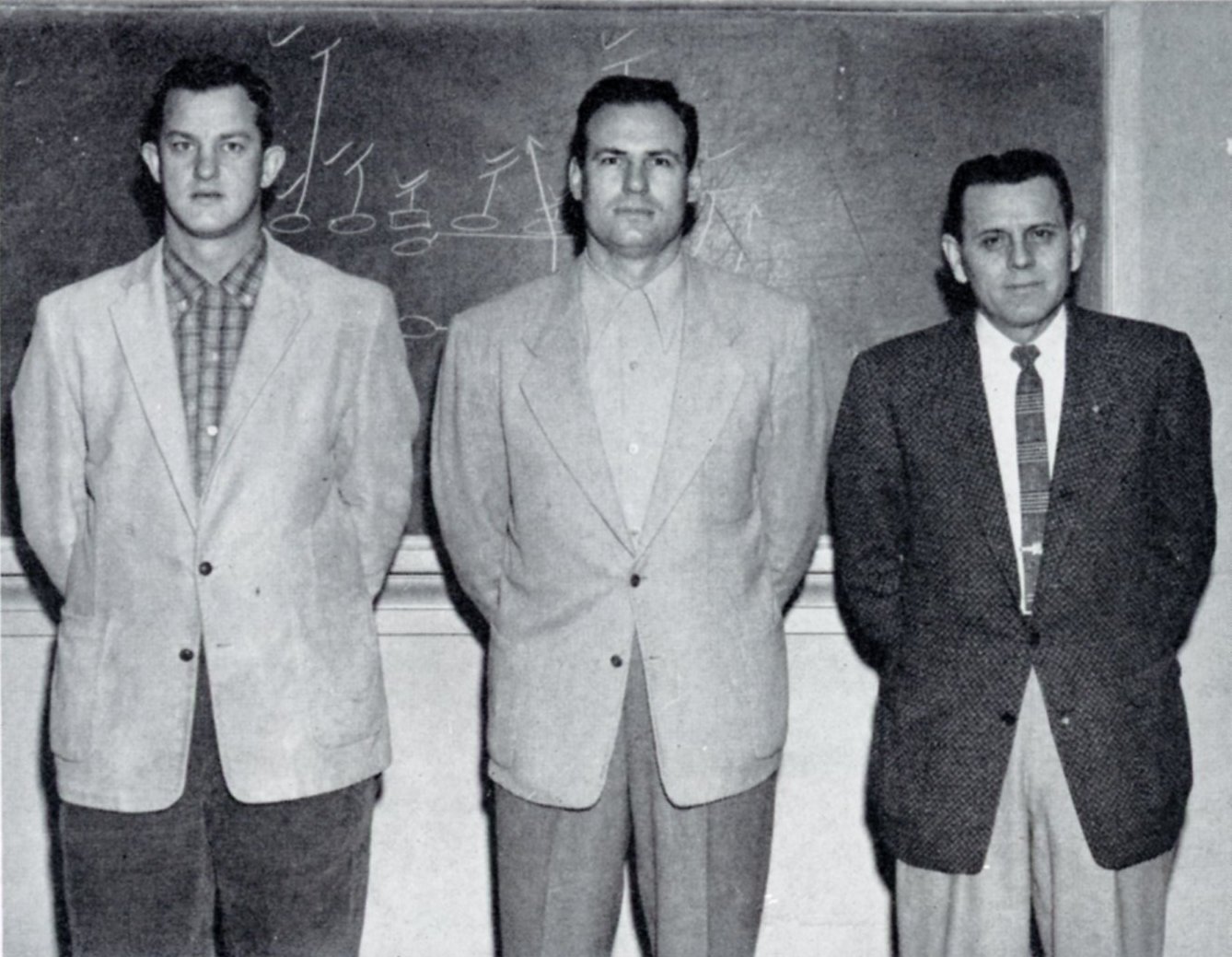 Who was the first individual to take a Tennessee Tech team to an NCAA tournament in the 1950s? Hint: Raised in Columbia, Tennessee, this 1954 business management graduate became a beloved dean and considered Coach Putty Overall his second dad.

The correct answer was Malcolm "Mutt" Quillen. Quillen, for whom the Tech baseball field is named, was a baseball coach at Tennessee Polytechnic Institute (now Tennessee Tech) from 1954-1958, winning two Ohio Valley Conference championships in four years. He was also an assistant in the TPI physical education department and an assistant football coach, serving under Head Football Coach Wilburn Tucker. In 1958, Quillen was appointed Dean of Men at Tech and served in that capacity until his retirement in 1975. During his tenure, he also served as director of men's housing, director of campus police and traffic, director of student insurance and director of student activities, organizations, concerts, lectures and public programs.

Congratulations to Daniel Hines, `21 biology, who won this month!

Which professor, who taught at Tech from 1929 until his death in 1961, was a founding member of the Tennessee Folklore Society in 1934. Hint: This same professor has a campus building named for him. This building was the first on campus to be solely dedicated to academics.

Monthly trivia questions in The Alumnus are designed to test your knowledge of all things Tech! If you know the answer, email alumni@tntech.edu. We'll randomly select one of the correct answers to win some Tech SWAG! 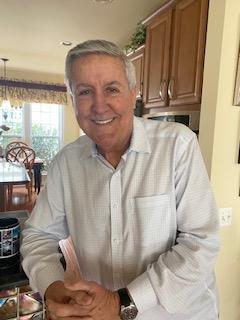 From majoring in pre-law at Tennessee Tech to protecting the president of the United States, Bob Babilino, `68 history/pre-law, says a Tech education showed him that he could be anything he wanted to be.

"Tech gave me, a young man with a mediocre academic background, a chance to achieve a goal that no other young man in my family had ever achieved: a college degree," said Babilino. "Without the opportunity to attend Tech, I am not sure I would have had the vision and direction to achieve what many call a successful career. I am very thankful to Tech for taking a chance on me."

After graduating from Tech, Babilino applied for a position with the Secret Service, but he didn't expect to be hired. The application process is extremely competitive; only one in 500 is selected.

"They may have made a mistake with me," Babilino joked. "But I was very fortunate to get in."

Babilino started out as a criminal investigator in the forgery unit, investigating counterfeit checks, bonds and U.S. currency. He was then promoted to White House detail where he was assigned to protect Secretary of State Henry Kissinger and President Gerald Ford.

Tech Took Us There features outstanding Tech alumni who credit their successes in their careers to the education they received at Tennessee Tech.

more tech took us there stories 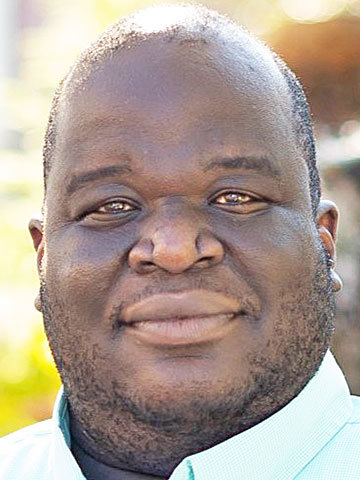 Ronald worked at Tennessee Tech for 16 years and was the assistant director of Residential Life and co-advisor for the Residence Hall Association.

He was loved by Tech staff and students, and his Residential Life colleagues say there will forever be a hole in the heart of Res Life. They described him as a beautiful soul, an amazing colleague and a wonderful mentor with an amazing smile and kind demeanor.

Ronald was the youth pastor for Gordonsville Church of the Nazarene and the assistant soccer coach for White County High School. He also loved Florida State Football. 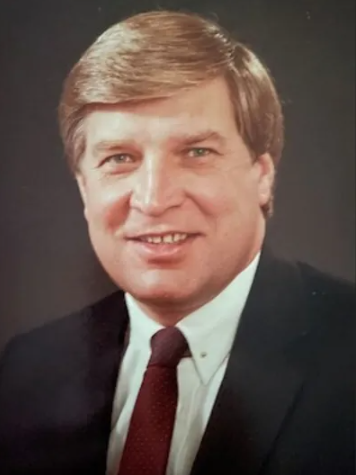 Richard graduated from Tennessee Tech in 1963 with a degree in mechanical engineering. It was there that he met and married his wife of 58 years, Marion Ann Papes. The two had four children and four grandchildren. Richard retired from General Electric Aviation in Evendale, Ohio.

"I was walking across the quad when I saw Richard walking toward me. I knew who he was because he played basketball, so I batted my baby blues and used my very best southern drawl to say 'Hi, Richard,' We both continued on our way. Later that day, I was on the tennis courts playing with a friend who lived in my dorm. She was one of the freshman class beauties so when I saw Rich outside the fence watching us, I assumed he was there to see her. At the end of the match, he called me over and asked for a date. Our first date was at the drive-in movie. We were married in April 1964." 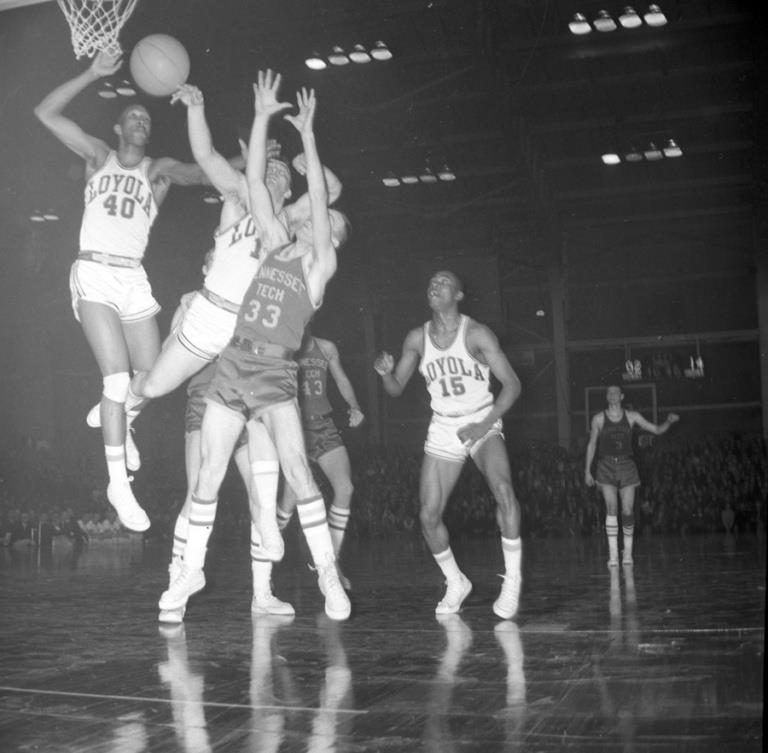 On April 13, 2022, Tech Archives participated in a film screening series with 63 other institutions airing and discussing the documentary "The Loyola Project." The film documents the 1963 NCAA championship win of the Loyola Ramblers of Chicago. The film was offered to Tech Archives due to our providing archival resources for the documentary and because of our participation in the 1963 NCAA championship. Tennessee Tech won against Morehead under Coach Oldham in the OVC playoffs on March 8, 1963, putting them in the NCAA playoffs against one of the tournament's top teams in the nation, Loyola. The Loyola win against Tennessee Tech remains the largest victory in the tournament's history.

Judy Flatt Delk, `78 physical education, `81 M.A. and `88 Ed.S., was named Title IX Trailblazer of the Week. Judy played basketball for the Golden Eagles and was on Tech's first volleyball team. After graduating from Tech, she taught and coached softball at Monterey High School for 20 years and Upperman High School for 15 years. In 2018, Monterey High School named their new softball facility Delk Field in her honor. Read more.

Rick Duffer, `07 Ed.S. instructional leadership, was selected to be the next Director of Schools for Macon County. Read more.

Stuart McGregor, `87 M.S. biology, co-authored a scientific book titled Crayfishes of Alabama. McGregor met one of the co-authors, Guenter Schuster, in 1986 when Schuster came to Tech Aqua (a biology station that Tech ran on Center Hill Lake) from Eastern Kentucky University. McGregor took one of Schuster's classes, and the two have kept in touch ever since!

David Murrell, `02 Ed.S. instructional leadership, was selected to be the next director of schools in Blount County, Tennessee. Read more.

Stephen Robbins, `93 M.A. health and physical education and `97 Ed.S., will be the next principal of Upperman High School in Baxter, Tennessee. Read more. 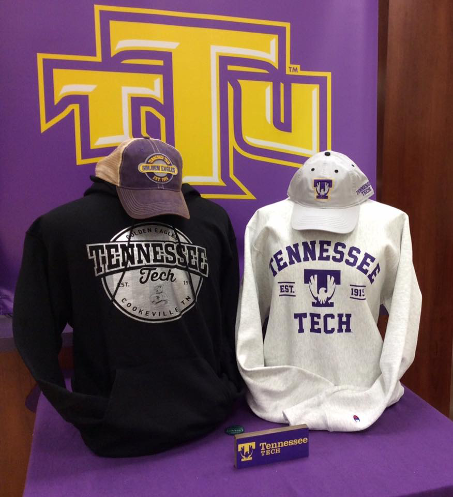