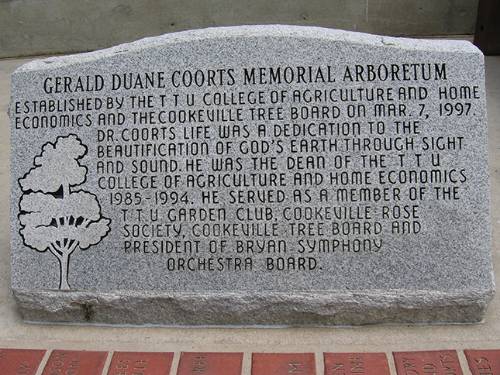 The Gerald D. Coorts Memorial Arboretum on the Tennessee Tech campus was officially dedicated on March 7, 1997 (Arbor Day). It encompasses all of the grounds from Oakley Hall to Derryberry Hall bordering on Dixie Avenue. The Cookeville Tree Board, of which Coorts was a member, proposed the memorial, and Tennessee Tech and the Board followed up with the plan to establish the arboretum.

After the dedication ceremony in Oakley Hall, a white beech memorial tree was planted on the Quadrangle in his honor. Also, a stone memorial (now located in front of Oakley Hall) was erected, and the plaque on the stone reads:

"Dr. Coorts' life was a dedication to the beautification of God's earth through sight and sound …"

When the memorial stone was relocated from the Quadrangle to its current location, it was placed upright on a concrete pad. Before the concrete was dry, leaf impressions were made in a concrete "lip" of the pad. One leaf from every tree located in the Arboretum at the time was pressed into the wet concrete. The border area of the pad was reserved for imprinted bricks, which were sold at $50 per brick to raise funds to support maintenance and expansion of the arboretum. The project is complete with some 60 bricks having been sold and installed.

The Tennessee Urban Forestry Council and the Tennessee Federation of Garden Clubs, Inc., certified the Gerald D. Coorts Memorial Arboretum as a Level 2 arboretum in August 2003. It maintains that certification to the current date.

The Cookeville Tree Board makes an annual donation to support maintenance of the Arboretum, but its proper operation depends upon additional donations from the public. Dr. Douglas Airhart, professor of horticulture and the arboretum manager, and the dean of the colleges, receives donations and oversees the expenditures and the arboretum account. 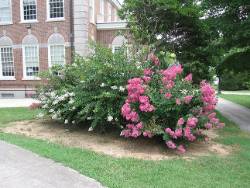