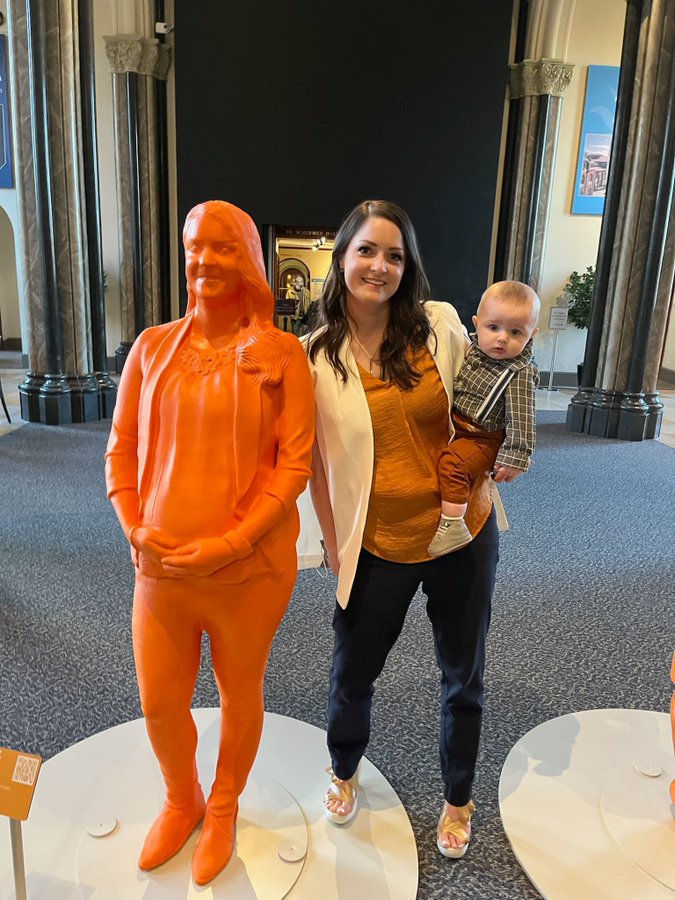 Amy Elliott, ‘09 B.S. in mechanical engineering, has joined an initiative designed to empower current innovators and inspire the next generation of pioneers.

Elliott is a 3D-printing specialist and manufacturing scientist for the Oak Ridge National Laboratory (ORNL), but her impressive career as a woman in STEM has found her on TV, as an ambassador for the American Association for the Advancement of Science and even as a 3D-printed statue at the Smithsonian’s Women’s History Month exhibit.

“Everything that I have gotten to experience and accomplish has been amazing, and very unique, and has changed my life,” she said.

Elliot went on to receive her Ph.D. from Virginia Tech, which lead her to be a contestant on the Discovery Channel’s Big Brain Theory, a reality show competition for engineers, where she placed second out of 10 contestants. Since 2016, she has served as an on-camera science personality for the Science Channel’s Outrageous Acts of Science, explaining the engineering and science behind viral video clips.

In 2021, she was named ORNL’s most accomplished innovator for her work in transforming advanced manufacturing in automotive, aerospace and other industries.

Currently, Elliott is an ambassador for the American Association for the Advancement of Science (AAAS). The association created the IF/THEN initiative, which is a part of Lyda Hill’s, an American philanthropist, commitment to funding game-changing advancements in science and nature. The ambassadorship was created to help this philanthropy build the workforce in STEM and allowed them to showcase women in the field.

“At first, I wasn’t really sure what would be involved, but I thought being an ambassador for AAAS would be a great opportunity to become a role model on a larger scale, and it turned out to be just a really amazing experience,” she said. “We go to meet, and the other ambassadors and I just thought we would get some social media coaching and a few other things, but then we get there, and they tell us we can apply for a grant of $10,000 grant to do a project towards outreach. They also told us they were going to be scanned in 3D and making a statue of us in life-size.”

The 3D-printed statue is on display in Washington D.C. as part of a Smithsonian exhibit of groundbreaking ‘female power players in STEM,’ celebrating Women’s History Month. Elliott’s statue in the IF/THEN initiative, “if she can see it then she can believe it,” is among 120 other statues depicting real women in STEM and is the largest collection of statues depicting women ever assembled.

“With this grant, I chose a project that has allowed me to be in the process of launching a children’s book called Where Does Electricity Come From: Superheroes in STEM and Trades. I wrote and illustrated the book which includes characters that are role models for women in STEM. In the back of the book, I have included real-life role models that were the inspiration for each of the characters,” she said.

When Elliott was a young girl, she didn’t have an idea of what she wanted to do until her brother joined a robotics team in high school that allowed him to travel to Florida for a competition. That piqued her interest because she wanted the opportunity to also go to Florida, even if that meant joining a team she knew nothing about.

“Luckily, I had some really great mentors along the way, one in particular that just sat me down on the design team and let me go. He ended up putting one of my designs on the robot, and that was like my lightbulb moment when I realized this is what I want to do. This is so cool,” she said. “I just feel in love with all the bits and pieces along the way of being a mechanical engineer, and it is cool to have the opportunity to be a role model for young girls and women through this initiative.”