Gina Pruitt, accounting ‘85, is drawn to young people, especially those who have a similar background to her own. It’s part of what has made her role in accounting and IT consulting leadership impactful.

“I was the first person in my immediate family to go to college,” Pruitt said. “My mom had a two-year degree as a nurse and my dad didn’t have any college experience. He was a great salesperson. He was a real estate agent, insurance agent, etc. So, he kind of taught me the personality of sales. I knew I wanted to do something that would allow me to use that and be around people.”

Pruitt applied and was 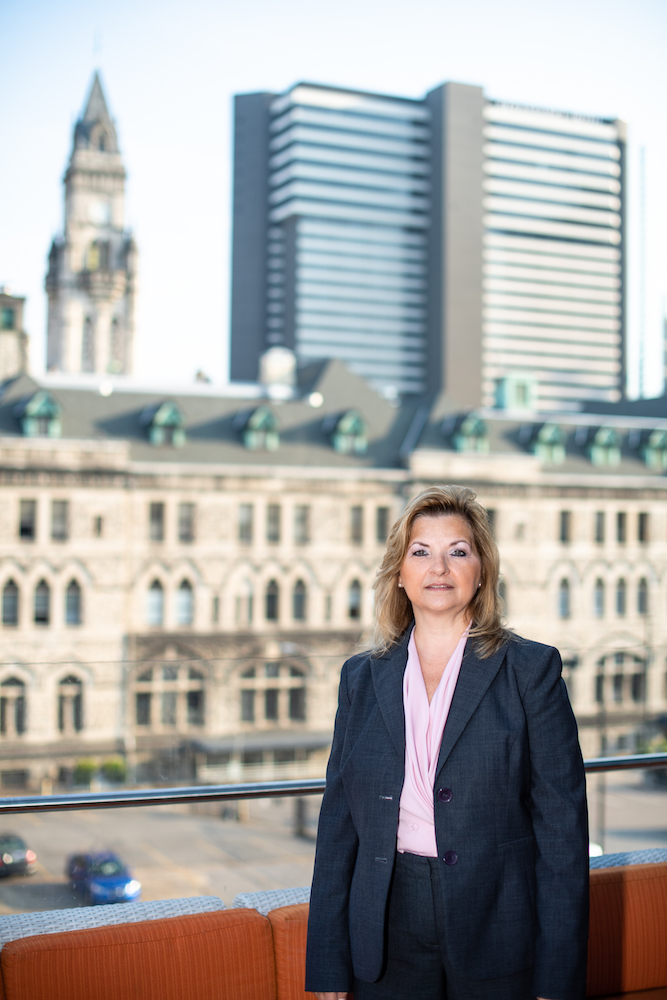 accepted to multiple colleges after graduating high school in Crossville, Tennessee, but choose to come to Tennessee Tech in order to remain close to home.

“I originally thought I wanted to be a lawyer,” Pruitt said. “I spoke to an attorney that my dad knew, and he told me that the best degree to get to be an attorney was an accounting degree.”

So, Pruitt jumped into the full college experience as an accounting major in Tech’s College of Business, but she never limited her studies to business courses. She lived in campus residence halls, joined a sorority and quickly found her place on campus.

“What was good for me was that I had a senior roommate, and she was a senior in accounting so, it gave me a lot of information about what it was going to be like to be an accounting student,” Pruitt said. “I really didn’t pay attention to the number of courses you had to have to graduate. There were classes I just wanted to take.”

That senior roommate had mentioned that Pruitt would likely do lots of report writing as an accounting major, and since she enjoyed English classes anyway, Pruitt took enough additional English courses to earn a minor in English.

Then she faced a fear and took classes in programming languages and information systems, which also gave her a minor in computer science.

“I knew that computers were becoming important and that was scary to me,” Pruitt said. “I just decided I wasn’t going to let that scare me.”

Still inspired by her father’s ability to interact so well with people, Pruitt added several social sciences courses to her schedule, enough to earn a minor in social science as well.

She ultimately chose to stick with accounting rather than pursuing a law career. She became Partner in Charge of Enterprise Risk Services with the accounting firm Deloitte and now works as partner and member-in-charge for Risk Assurance and Advisory Services with KraftCPAs, an internal IT audit and consulting practice.

The combination of an accounting degree with computer science, English and social science minors has propelled Pruitt through a successful career where she not only has a professional impact, but also serves as a mentor to young recruits to the firms where she has worked.

“All of those have really helped me because I have written a lot of reports, and now I review a lot of reports that go to my clients, and I want to make sure they look nice and read well. We are writing to people who are board members and members of audit committees who don’t necessarily understand the technology and terminology so we have to write it in a sense that they can understand it, but the technology people still know what they have to do to fix the problem,” Pruitt said.

“The social science piece, being the leader of a practice, being responsible for a team, has helped me a ton in being able to deal with a person,” she said. “People always tell me that I have a keen sense. When I interview somebody, I immediately know whether that person is going to fit well into the culture, as well as whether they are going to be good at doing what we do. It’s kind of an innate thing, and I would point it right back to the classes that I took at Tech.”

As a first-generation college student, Pruitt often finds herself connecting with young business recruits who have a similar background to her own, with no real family experience in business or college life, and she wants to help them. That’s part of what has motivated her to stay connected to Tech’s College of Business, serving on the accounting advisory board during the development of several programs.

“I really like young people. I am a recruiter at heart,” Pruitt said. “I recruit at a lot of campuses. I was on the accounting advisory committee (at Tech) for three years, and because I recruit at other schools, that was helpful, I think, for Tennessee Tech because I could bring perspective from other programs. For instance, when the College of Business was developing the online Master of Accountancy program, I was telling them about others schools where I recruit and how those programs work, giving the college a lot to take into consideration when developing that program.”

And while she uses the lessons she learned as a Tech student every day in her professional roles, her connection with the people she met at Tech and with the students and young graduates she continues to recruit into the business world are what she feels the strongest about and what continues to motivate her.

“I have been very blessed,” Pruitt said. “I feel like all of this fell into place. It wasn’t that I could foresee the future or anything. I believe that God led me down the right path and it has all fallen into place. It has happened the way it was meant to happen.”