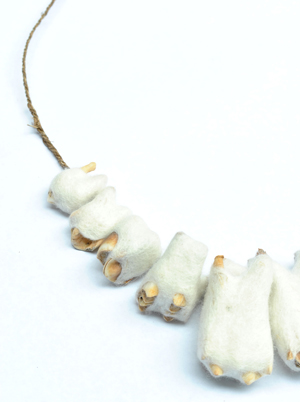 April Hale creates large-scale adornment based on our relationships with the landscape. The materials she uses – felted wool, found natural and human-made objects – serve as a metaphor for the interaction between human and wild.  Additionally, April makes and sells a line of landscape-inspired sustainable sterling silver, steel, and enameled jewelry at craft shows and stores around the country. She holds an MFA from Montana State University and a Craft Certificate from the Appalachian Center for Craft. When she is not working in the studio, April can usually be found wandering in the woods, either on foot or cross-country skis, studying birds and finding wonder in her surroundings.

"The education that I received at the Appalachian Center for Craft changed the direction of my life and career…The amazing professors, curriculum, residents, and studios opened my eyes, hands, and mind to the world of fine craft and instilled in me a devotion to combining craftsmanship, concept, and creativity…The exposure that I received at the Craft Center to working artists who support themselves with their craft inspired in me the knowledge that I, too, can make a living at what I love to do." - April Hale 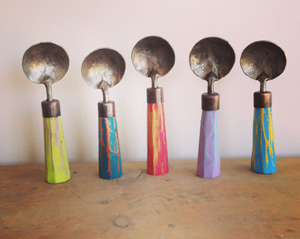 Eric Eugene Smith is the owner and operator of EE Ironworks, an artisan blacksmithing studio that provides handcrafted custom ironwork. Smith's first taste of blacksmithing came while he was working at a Boy Scout ranch in New Mexico. It was then he decided he needed to pursue blacksmithing as a profession. He attended the Appalachian Center for Craft and received a BFA in metals in 2006, concentrating in blacksmithing. He has taught and assisted many workshops and worked at several high-end custom blacksmith shops across the United States. EE Ironworks is located in Chattanooga, Tennessee, and produces commissioned works as well as a line of hand crafted iron goods. 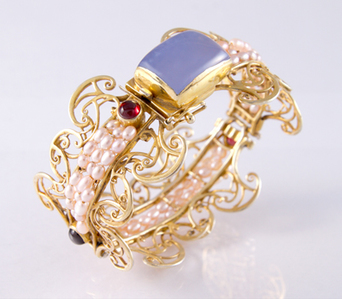 Anna Quarles was born and promptly started making stuff. By the sixth grade she made jewelry out of a broken television, and then never stopped making jewelry.  After graduating college she worked for various jewelers in California, New York City and Virginia in addition to cycling across the USA in 2008. She has lots of fun.

"The Appalachian Center for Craft, with its amazing facilities and community of artists, enriched me…Having the time and space to create a portfolio enabled me to pursue a career as a jeweler…Being a student at the Craft Center was one of the highlights of my life." - Anna Quarles