Karen Short is a graduate from the Bachelor of Fine Arts painting program at Tennessee Tech University. She works using a combination of mediums; in particular acrylic paint, charcoal and ink. In addition to her studio practice, Karen works as a Preparator for the Appalachian Center for Craft's exhibition galleries and as Director of the 2015 ART Prowl, an annual two-day gallery / studio walking tour and community event. Short also serves as a blog contributor and copy editor to the Create & Inspire website. Her artwork has been shown nationally, and she regularly exhibits with Corvidae Collective Gallery, in Nashville Tennessee.

"My education from the Tennessee Tech Art Dept. has been critical to my career and artistic success…Beyond the foundational skills my art education gave me, it also provided me with amazing opportunities to participate in the development of my local art community." - Karen Short

Jason Sacran was born in 1980 and raised in the middle Tennessee area. He graduated with his Bachelors of Fine Arts degree from Tennessee Tech University in 2006, and moved to Fort Smith, Arkansas in 2007. There, Sacran became the curator of the now Fort Smith Regional Museum, and an adjunct instructor at the University of Arkansas - Fort Smith. He entered into a Masters of Fine Arts degree program at the Academy of Arts University in San Francisco, California, but, needing to provide for his young family, he put his graduate school endeavors on hold. In 2010, he went full-time as an artist/painter, and has since been invited to many exhibitions and awarded many times with such organizations as the Portrait Society of America and Oil Painters of America among others. Sacran has also had featured articles with publications such as Southwest Art, International Artist, Artist Magazine and PleinAir Magazine.

"Tennessee Tech gave me a chance to explore art as a career… more than fundamentals… how to survive the harshness of the art world… how to handle the rejection, disappointment, how to be a small fish in a large pond...how to find opportunities, to be courageous in the midst of bad odds, and how to begin a career in a tough and very competitive world….the BFA Degree has helped me to obtain job positions leading up to being able to work full-time as an artist." - Jason Sacran 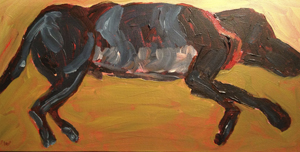 Williams was born in Indianapolis, Indiana in 1955. Her family lived near the art museum, of which she took full advantage. She left in the 70’s for college in Virginia; hearing a lecture by a prominent printmaker caused her to transfer to Indiana University. Life went on and she followed her family to Cincinnati, Lexington, Kentucky, and ultimately Cookeville, Tennessee. Tennessee Tech University afforded her the ability to earn a coveted BFA in Painting. She began to actively sell and exhibit her work; the In-Town Gallery in Chattanooga was a highlight. A co-op gallery, it afforded her fellowship with artists and great gallery exposure. Her children grew up and she left for Birmingham and, ultimately, the Panhandle of Florida. She created an art car named Nippy Thelma; taking her to mecca, a.k.a. Houston,Texas. The parade experience often includes working with school children. She continues to paint and express herself through art. Williams lives with two dogs and often has visits from her four children.

"The education I received was rich in basics and broad in exploring exhibition possibilities. I was encouraged to push limits beyond basic applications… The lessons I learned at Tennessee Tech have stayed with me." - Nancy Nichols Williams