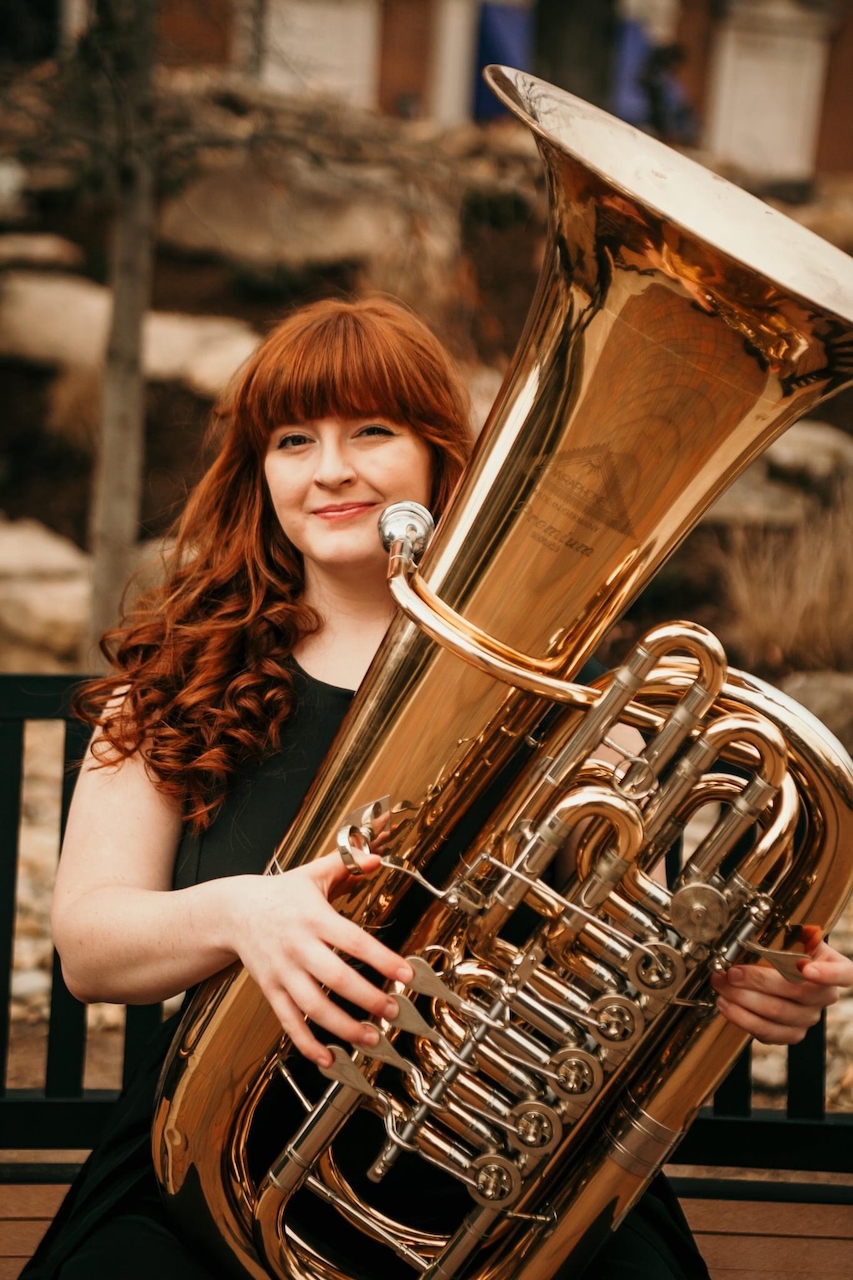 When Tennessee Tech senior and euphonium musician Hannah Eitzen started getting ready to pick her music for her recital, she realized she had never played a piece composed for the tuba by a woman. She made it her mission to put together a series of songs all written by women for her performance, however she didn’t stop there.

Eizen, who is a music education major planning to graduate in 2023, decided to form an all-female tuba euphonium group – the first at Tennessee Tech – in the fall of 2021.

“A euphonium is very similarly shaped to the tuba. I call it a ‘baby tuba,’” Eitzen said. “It’s very similar but it sounds an octave up and it sounds closer to the human voice. I’ve always been in the tuba quartets with a bunch of guys. They’re fine, they’re great musicians, but sometimes it’s different.”

When it came time to decide on a name for the group, Eitzen researched online to see what similar groups across the country had chosen for their names.

“There were some that, I don’t want to say they’re gross, but they’re kinda gross. Like the ‘Fallopian Tubas’ and the ‘Brass Babes,’” Eitzen said, “and I thought they just felt icky to me. I don’t want it to be comical that we’re an all-women tuba euphonium group.”

She decided on “Dismantle the Patriarchy.”

“It’s been a super great experience,” she said. “All the girls there are all younger than me. I’m kinda the ‘super senior.’ So I’ve just been kind of the student coordinator. I’ve been in charge of helping pick our music and just helping guide them through the process that is the college music major experience, which is wild. So, it's been great.”

“I was so excited because it’s always been like me and maybe one other woman,” Eitzen said. “And I think for a while it was just me in this giant studio that we have between like 15 and 20 dudes. So, when I saw that we were able to do it, and Mr. (R. Winston) Morris (professor of music at Tech) gave us the approval, I was like, ‘Yes!’”

Eitzen was stunned when she was named as a finalist for the Alison Piepmeier Outstanding Student Award by Tennessee Tech’s Commission on the Status of Women. It is an award in honor of the late Piepmeier that honors a student working for gender equity and humanity on campus.

“I was able to read about Dr. Piepmier, because before I got the email and learned about the award, I didn’t know who she was,” Eitzen said. “Unfortunately, she passed away, so I won’t get the chance to meet her, but just reading about everything that she was able to do, that in and of itself was super inspiring.”

One of Eitzen’s favorite memories for far at Tech has been getting the chance to play with well-known euphonium soloist, Gail Robertson. Eitzen played a duet during a spring concert, using music that Robertson had just written for euphonium and tuba.

“She Facebook messaged me and was like, ‘I caught part of the livestream! Thank you so much for playing my piece.’ Oh my gosh what do I say?! Her coming (to Tech) in the fall was kind of started by that. That was really cool. They’ll bring in artists and composers and clinicians to the music building, but to be able to really work with them. It started as a message and it ended with her giving a full-blown concert. It was really cool to be able to perform a piece and have the composer right there. Getting to work with her was such a great experience.”

Eitzen encourages other students to get involved in the music program and look for similar opportunities right here at Tech. For more information on how to get involved, visit https://www.tntech.edu/fine-arts/music/.