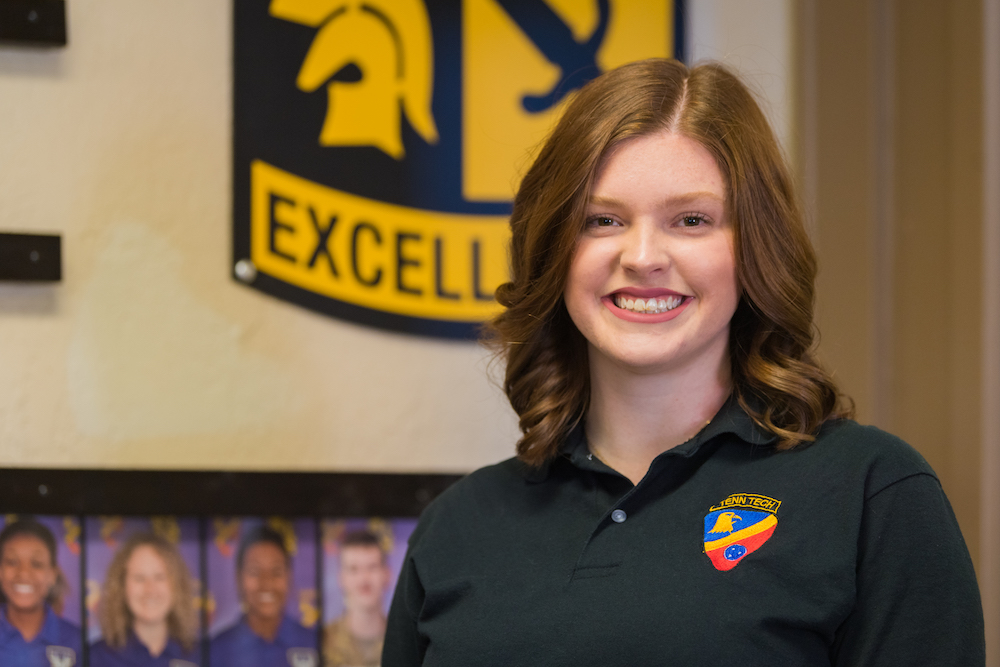 Sierra Alexander, a “fifth-generation soldier” in Tennessee Tech’s ROTC program, is a proactive member in every community she’s involved with. Before arriving at Tech, she grew up in Dyersburg, Tennessee and participated in many of her school and community events.

After graduation, she toured around 15 campuses before choosing Tech. Her reason for choosing Tech is because the campus is smaller and allowed her opportunities to better know her professors and fellow students.

Alexander decided on her major before going to college. She enjoyed collecting rocks with her mother from a young age and this enjoyment is what led Alexander to choose geology as her major. In the College of Arts and Sciences she is the only ambassador who majors in geology, which means she holds a lot of responsibility overlooking the other geology majors in the program.

Before deciding to become a ROTC student, there were a few outside factors that influenced her decision. First, she joined FFA in high school. Those experiences led her to researching ROTC and gaining interest in the program. Second, her family has a history of serving our country during times of crisis.

“I’m a fifth-generation soldier,” says Alexander. “I have family members who served in WWI, WWII, the Korean War, and the Vietnam War.” For her, “It’s a family tradition,” and she is excited to follow in the footsteps of her family.

Alexander describes the ROTC program as a dynamic experience, changing every year you are involved. Freshman participate in physical training, and she says it helps form better connections with fellow ROTC members compared to sitting in a classroom. From contracting with the ROTC program, Alexander does not have to worry about financial aid as her tuition is covered in exchange for her commitments.

Not only does the program help with college tuition, but as Alexander states, “it helps with self-improvement. Even if you’re just looking to get in shape or form a healthier routine, ROTC can help you with that.”

Alexander explained how ROTC helped improve physical and personal qualities about herself. Going into the ROTC program helped with misconceptions she learned about the world in high school.

“Participating in ROTC opened up my mind and helped me become a better leader,” comments Alexander.

Not only that, but she also sees that she has become a better listener and is able to help her teammates through hard times.

After graduation, Alexander will serve in the Army for 6-8 years. Once she is out of the Army, she wants to work doing private contracting for the government.

While those are her plans for the future, she is taking her time and enjoying her college and ROTC experiences. Alexander says her biggest accomplishment so far is “the relationships built. Not only in ROTC, but also through being an ambassador and an RA (resident assistant).”

There is a lot Alexander wishes students will try at Tech, but her biggest recommendation is taking one ROTC class.

She says, “There is so much you will learn from it. You’ll learn basic leadership skills, first aid, and a lot about life in general.”