Mohera Narimetla ’20 is accustomed to being in the spotlight. Adorned with vivid colors and elaborate details, she is a not only a dancer but a chemical engineering major as well. Narimetla has dedicated most of her life to the study of a North Indian classical dance, Kathak. She has enjoyed telling her stories through Kathak dance since she was 5 years old.

Kathak is the art of telling a story through dance. Kathak is one of eight classical Indian dances recognized in India with Muslim and other Middle Eastern influences. 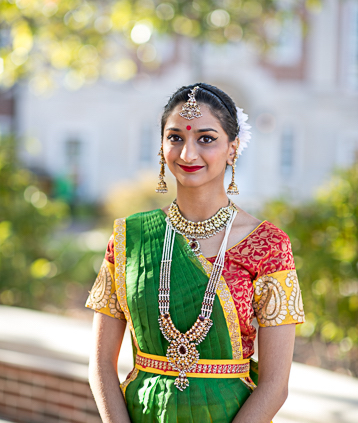 Dancers tell their story using footwork and fast turns to present their knowledge and technical abilities of rhythm. While simultaneously displaying elegance and grace, live music is commonly used to accompany the performance with instruments such as the harmonium, which produces the melody, and the tabla, which maintains the rhythm.

Narimelta said she decided to start dancing because, “My family has always had a passion for dance, which inspired me to begin dancing. Ever since I was a kid, I loved dancing around constantly. It is a tradition that I would like to uphold, but I really do it because I just love to dance.”

Narimetla has been a part of the Upasana Performing Arts Center, located in Nashville for the past 13 years. She is also part of the school’s professional dance company and has participated in performances throughout Tennessee and the south.

“One thing that I enjoy about Kathak is that you get to make it your own and make it original, too. The dance form itself allows for individual flexibility and creativity. That’s what makes it so unique, and that’s why I enjoy it so much.”

Having enjoyed dancing Kathak for many years, Narimetla is now a distinguished Kathak dancer. She has received a diploma for her merit from a certified performing arts school in India. Narimetla plans to continue her passion for dance and progress into becoming an adult professional Kathak dancer.

Narimetla believes that dance, especially Kathak, is meant to be diverse. She strives to keep her Indian roots and traditions alive, bringing awareness about classical Indian dance to people throughout the country.

In the future, Narimetla hopes that she will be able teach chemical engineering or related studies at a university while continuing her dance journey.

“The emotions I feel when I dance are unexplainable. It’s like euphoria, but it’s also very grounding at the same time. It’s a completely transcending experience, and it’s unlike anything I’ve ever felt before.”