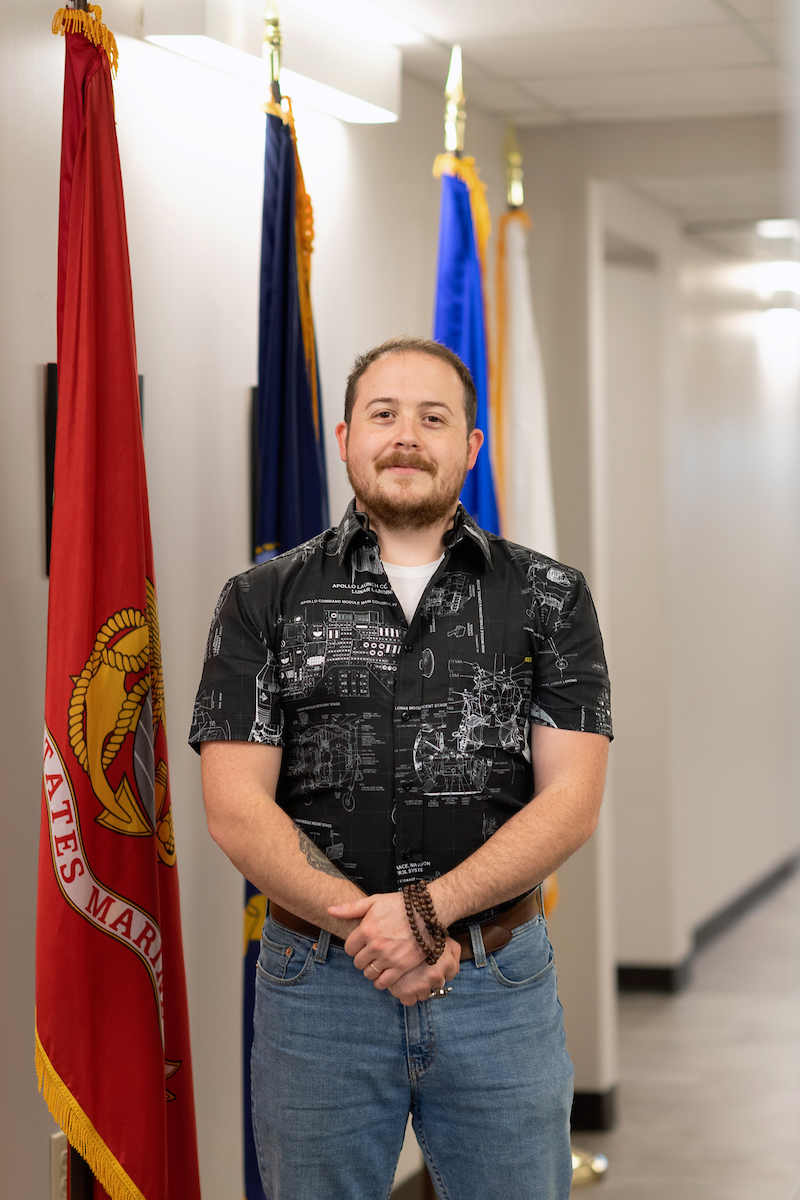 Kevin Zalesak was born and raised in Tomball, Texas, before serving in the United States Air Force. Zalesak later attended Vol State Community College, which gave him a foundation to transfer to Tennessee Tech University.

Zalesak’s achievements at Tech have earned him this year’s Outstanding Student Veteran Award. The award was established to showcase an outstanding student veteran who has continued to exceed their responsibilities.

“The award was created last year to recognize one of our student veterans, Travis Williams, for his hard work and dedication to our department. We then decided to keep it going to show our appreciation for other dedicated student veterans down the road as well,” veteran coordinator Charmian Leong, said. “This year, we decided to present the award to Kevin Zalesak because for the past two years, he has gone above and beyond in providing his time and talents to various projects undertaken by the Student Veterans Organization.”

When Zalesak decided it was time for a change, he left his job in Albuquerque to move to Tennessee. He first started pursuing a degree in mechatronics at Vol State but realized that wasn’t the right fit. After talking with associate professor of art, craft and design David Gallop, he decided to transfer and pursue a degree in graphic design.

“The transfer from Vol State to Tech was easy, very easy. The military and veteran affairs office was 100% supportive. They've done anything I've ever needed. Including when my post-911 GI Bill was running out of time and money, notifying me about the vocational rehab program [since I'm a disabled veteran] and helping me continue my benefits so I can finish my degree,” he said. “Otherwise, I would have been paying out of pocket. So, they're very knowledgeable on what they're doing and letting students know.”

Serving in the U.S. Air Force has shaped Zalesak’s experience in every aspect of his life. During active duty, he was stationed at Sheppard Air Force Base in Texas, Osan Air Base in South Korea, Cannon Air Force Base in New Mexico, Bagram Airbase in Afghanistan and Djibouti, Africa.

“I loved Korea; that was a lot of fun. I really enjoyed the Korean culture and food. In some of the other places I was stationed, it’s a deployment to where you’re on base. You’ve got stuff going on, especially because it is a conflict zone. So, experiencing culture and food was not one of the things we could really do,” he said.

Zalesak says that the U.S. Air Force gave him the tools to excel in life and school. “It allowed me to gain experience prior to coming to school. I just wasn’t ready to go to higher education in high school, but the military and getting out actually helped me. I became calm, focused and had a sense of oh, I need to do this,” he said.

Embracing the challenges of returning to school, Zalesak was on the verge of not knowing what he wanted to do. He had the opportunity to continue pursuing a degree in mechatronics, but he stated he was tired of doing what people thought was right. So, he decided to do something that was for him.

In the future, Zalesak plans to continue working in graphic design, hoping to build a career out of it one day. He is currently expanding his work to do 3D and animations.

“If you want to even just have a trial basis with school or anything in life, you know, it's not a bad idea to at least try it if you're thinking about it because you might enjoy it,” he said.